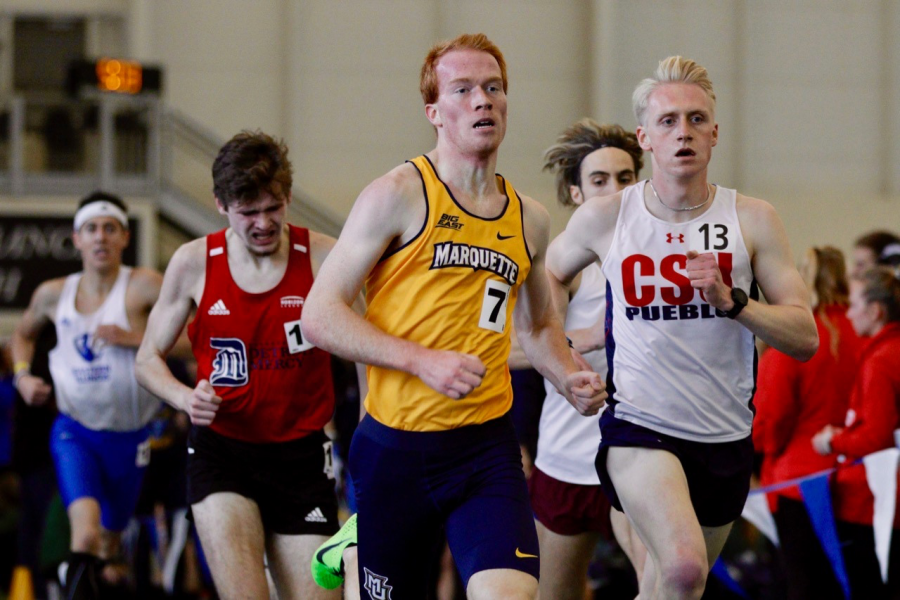 Distance runner Derek Gross attended Neenah High School where he lettered in cross country and track and field while serving as team captain during his senior season, foreshadowing his career as a collegiate athlete.

“I always knew I wanted to run at a Division I university throughout high school,” Gross, a senior in the College of Business Administration, said. “I took a visit to Marquette’s campus, and I really liked the facilities as well as the business school, so I knew it would be a great fit overall for me.”

As a member of both the cross country and track and field teams, Gross has had to deal with constantly being in-season for the past four years.

“Derek struggled a bit throughout his freshman year during cross (country) season but then improved dramatically when it came to the track and field season,” Rogers said. “I believe he’s improved gradually every year throughout his career here at Marquette.”

Gross said that growing up, he was more successful at track and field than cross country. If he had to pick between the two, the Neenah, Wisconsin, native said he would choose track and field, but he said he has been working on the distance element throughout his four years at Marquette.

“Obviously, cross country races are longer than most races during track season, so I’ve tried improving working on my distance to help me get better overall,” Gross said.

Throughout his four years on the track and field team, Gross has competed in several different distance events like the 600-meter run, 800-meter run, 1,500-meter run and the 5k. He currently holds the No. 8 all-time mark for Marquette in the indoor 800-meter run with 1:51.22, which he set this past season at the Indoor BIG EAST Championships.

Gross was also a part of the distance group last season that broke the 38-year-old program record in the distance medley relay team with a time mark of 9:49.05.

“That was one of my favorite moments coaching Derek,” Rogers said. “To see him be a part of that group breaking that record was pretty special.”

Rogers said not only has Gross been reliable on the track but behind the scenes as well.

“Derek has shown that he’s a leader to his team,” Rogers said. “He is very outgoing and looks out for everybody. He’s been super important to our team as many of his teammates look up to him, which is something you always want from the leaders on your team.”

During his senior year, his coaches voted him team captain for the 2019-20 track and field season. Although the season was cut short due to the coronavirus pandemic, Gross said he was honored to have served the team as captain.

“I consider myself someone who leads by example, and I’ve always tried to show that good things happen to those who show up and work hard,” Gross said. “I always support my teammates, and I try my best to reach out to new people however I can.”

During his four years competing, Gross said he has had many memorable moments, but none have meant more to him than winning the 2018 Outdoor BIG EAST Championships.

“That was the first and only time we won the conference meet while I was at Marquette,” Gross said. “The story of my career was always finishing second. That year we took second at every meet except that one, where we crushed everyone and won the conference. I will also always remember qualifying for the 800-meter run final for the first time as I finally broke through that barrier.”

As for what’s next, the senior distance runner is still weighing his options on a potential return to the track next season, as the NCAA Division I Council announced March 30 they would add an extra year of eligibility to spring sport student athletes due to COVID-19.

“I’ve thought about my decision for next year a lot recently,” Gross said. “Before the coronavirus pandemic, I was set for a job in New York City after graduating from Marquette. I have reconsidered going, but it’s less likely that I will return next year back to Marquette, but I’m not going to rule it out quite yet.”