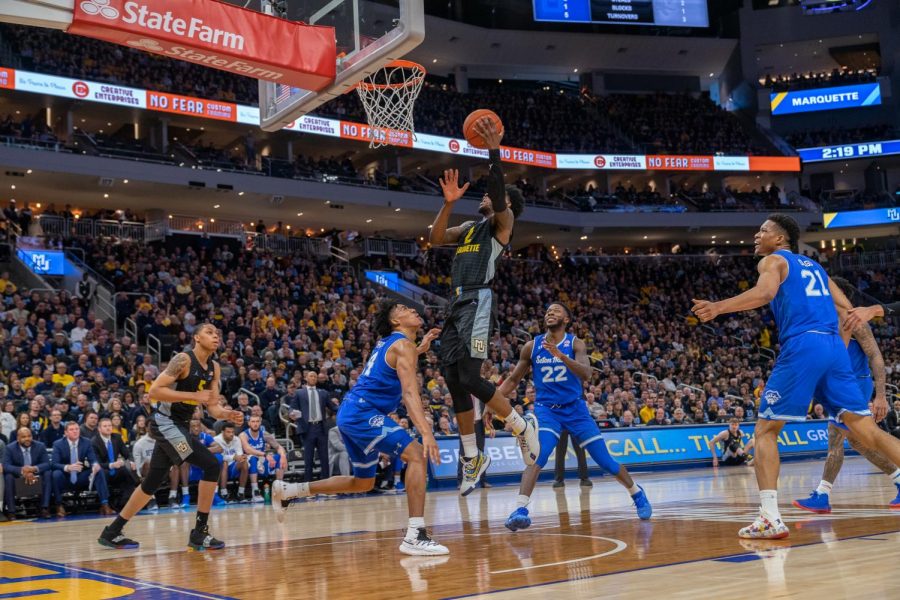 Sacar Anim (2) puts up a layup in Marquette's loss to Seton Hall on Senior Day Feb. 29.

The former four-star recruit finished his first season of collegiate basketball ranking third on the Buckeyes’ roster with 10.4 points in 20 games. He also started three times and recorded 59 assists and 2.8 rebounds per game. ESPN ranked him No. 2 in their transfer rankings.

The 6-foot-2 guard had 13 double-figure scoring games this past season. His career-high 19 points came at the University of Minnesota Dec. 15.

With seniors Markus Howard and Sacar Anim graduating, head coach Steve Wojciechowski was looking for guards to eventually take those spots, which Carton may be able to fill. Due to NCAA transfer rules Carton will probably have to sit out during the 2020-21 season but then will have three years remaining of eligibility.

After scoring 17 points and one turnover in 21 minutes at Northwestern Jan. 26, OSU announced Carton left the team and returned home to complete classes online to address his mental health.

“I am not doing my teammates justice if I don’t work on this now. I am doing everything in my power to strengthen my mental health,” Carton said in a tweet. “I will fight for my team and buckeye nation and I will come back stronger! If you are going through mental health issues, I have learned through this you are loved and valued.”

Before choosing the Buckeyes, the Bettendorf, Iowa, native was named 2019 Iowa Mr. Basketball while averaging 24.4 points, 7.6 rebounds and six assists in his senior season. During his junior and senior years, he was also First Team All-State and All-Conference.

He completed his high school career with a school-record 26.3 points, 5.7 rebounds and 3.3 assists as a junior.

Carton was the top recruit in Iowa according to 247Sports, a prominent recruiting site. He was also ranked the No. 34 recruit in the nation and the No. 4 recruit in his position at point guard. He had chosen OSU over Big Ten rivals University of Michigan and Indiana University.