Marquette golfer was always destined to become a Golden Eagle 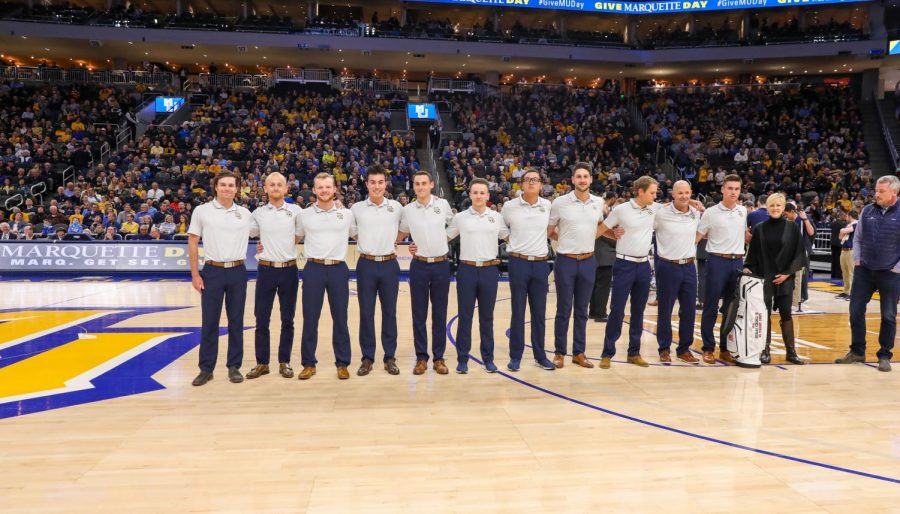 Matt Bachmann (second from left) and the golf team is recognized at the Feb. 26 men's basketball game. (Photo courtesy of Marquette Athletics.)

For 2016-17 BIG EAST Freshman of the Year and 2017 BIG EAST Individual Champion Matthew Bachmann, some may say he was destined to be a Golden Eagle from the very start.

“There was always a passion for Marquette to begin with,” Marquette golf head coach Steve Bailey said. “He had a strong connection with our (men’s) basketball program growing up from just being a huge fan.”

Although Bachmann’s love for Marquette men’s basketball impressed Bailey, it was his early success in golf that eventually helped him to achieve the goal of being on a Marquette sports team.

“He jumped onto the scene as a junior golfer and shined on the big stage at a young age,” Bailey said. “He finished runner-up at the Wisconsin State Amateur as a 16-year-old.”

Bachmann said his success in the Wisconsin State Amateur was one of his most memorable moments prior to his collegiate career.

“It was a really good tournament, and I really played well all week,” Bachmann said. “It was really fun to have a chance at the end to win the biggest in-state amateur tournament.”

His experience prior to becoming a Golden Eagle was reflected in his first-year, as he was named the 2016-17 BIG EAST Freshman of the Year and was a significant contributor to the team’s success in winning the 2017 BIG EAST Conference Championship.

Bachmann said his success from start to finish, especially in the 2017 BIG EAST Tournament, added validation he was capable of competing at a high level. He also said winning the 2017 BIG EAST title as a team was his favorite memory.

From his early success as a first-year to his final season as a senior, Bachmann said he will take many lessons away from his time as an athlete.

“I have grown to be more independent and take those steps into the real world … (and now) it has obviously become more real and a lot closer,” Bachmann said. “I have also developed a lot of good relationships, and that’s something I have learned the most about: The power of relationship.”

Bailey said he has been able to see Bachmann blossom significantly from his first year.

“He definitely came out of his shell,” Bailey said. “He is overall pretty quiet, but he is one of those guys that when he did take the time to step up and speak, people always had a respect for what he had to say. That was mainly because of who he was overall. He did everything you asked him to do whether it was in the classroom or on the golf course.”

Bailey mentioned aside from his performance on the golf course, it was Bachmann’s personality he appreciated the most.

“His demeanor was so level. … It’s what makes him good, and you learn to appreciate that about him,” Bailey said. “He is very wise. … If he had something to say, he was going to make it very poignant.”

Bachmann said it took a while for his relationship with his coach to develop but is appreciative for the impact Bailey has had on him.

“Coach (Bailey) has had an incredible impact on my life. … He is a really inspirational guy,” Bachmann said. “You hear it from everyone who knows him that as soon as they meet him, they just talk about how good of a person he is. It speaks to the number of people he has touched.”

With the season being terminated due to the coronavirus outbreak, Bachmann said he will always cherish his time on the golf team.

“(I will miss) being with the team every day,” Bachmann said. “It really became a family-like environment over the past few years, so it’s more than just graduating and moving on. It’s like I’m leaving a family behind in a sense.”