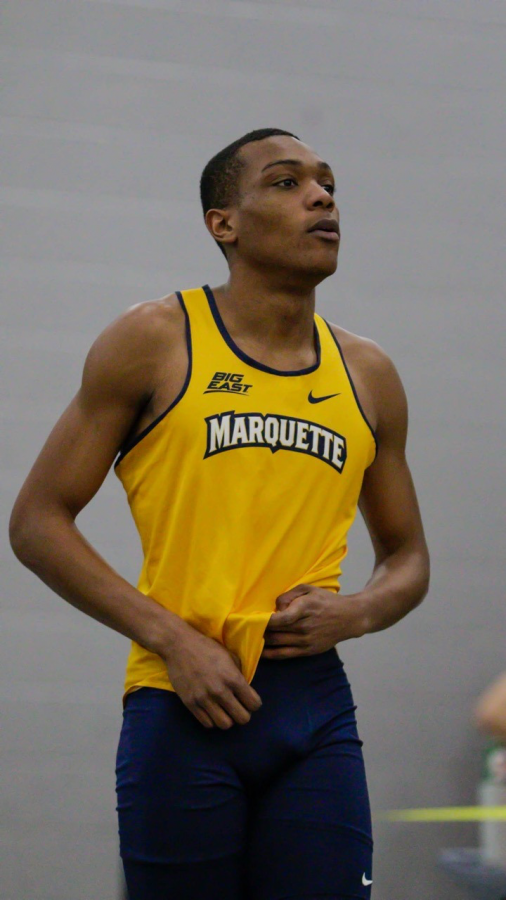 Senior jumper Daniel Armstrong saw his senior season cut short due to the COVID-19 pandemic, which led to the cancellation of the remaining NCAA Spring Championships last month.

The NCAA Division I Council voted March 30 for an extra year of eligibility for all student-athletes in spring sports whose seasons were canceled due to the coronavirus.

Armstrong said he’s planning on taking advantage of an extra year of eligibility by attending graduate school at Marquette. He is currently studying finance in the College of Business Administration.

“I want to come back next year even better and break the high jump records and win another BIG EAST Championship in the high jump,” Armstrong said. “I also want to bring a national championship back to Marquette.”

A native of Michigan City, Indiana, Armstrong attended Michigan City High School, where he lettered in track and basketball. As a senior, he won the state title in the high jump with a personal best 7-foot jump which tied him for the 15th best jump out of all high school athletes in the country.

Despite Armstrong’s high school resume, Marquette was his sole recruiter, which led to his decision to attend the university.

Head coach Bert Rogers said he has been most impressed by Armstrong’s growth over the years.

“Daniel was (6-foot-7) coming out of high school and was very slow and had a bad approach, but he had serious hops, so we knew he had great potential,” Rogers said. “I like to call Daniel a diamond in the rough, and I’m glad we got him on our team. He wanted to be an All-American, and his performances have shown that.”

Although Armstrong admits his dedication to his sport has helped him improve throughout his career, he didn’t take all the credit for his success.

“My improvement shows more about how great our coaches are at making everyone better,” he said.

Armstrong isn’t always the loudest one on the team, but Rogers said his presence around others makes a difference.

“Daniel was a quiet guy most of the time, but during all of our meets he was always focused and supportive of his teammates, and it seemed like the bigger the meet, the bigger he jumped — so that shows he always rose to the occasion,” Rogers said.

Looking back on his past success, Armstrong said his proudest performance in a Marquette uniform came this year at the Panther Tune-Up at the University of Wisconsin-Milwaukee when he set a personal record — while dealing with an illness.

“Just how I was able to overcome being sick and set a PR … made it that more special,” he said.

Armstrong also said the first time he qualified for the NCAA Indoor Championships was a memorable moment.

“It was the last event of the day, and everyone in the building was cheering me on, including all my teammates, so it was really special to celebrate with all of them after qualifying and is something I will never forget,” Armstrong said.

Armstrong said he is hopeful that his return to the track next year will solidify his career resume.