Marko looks back on her time at Marquette 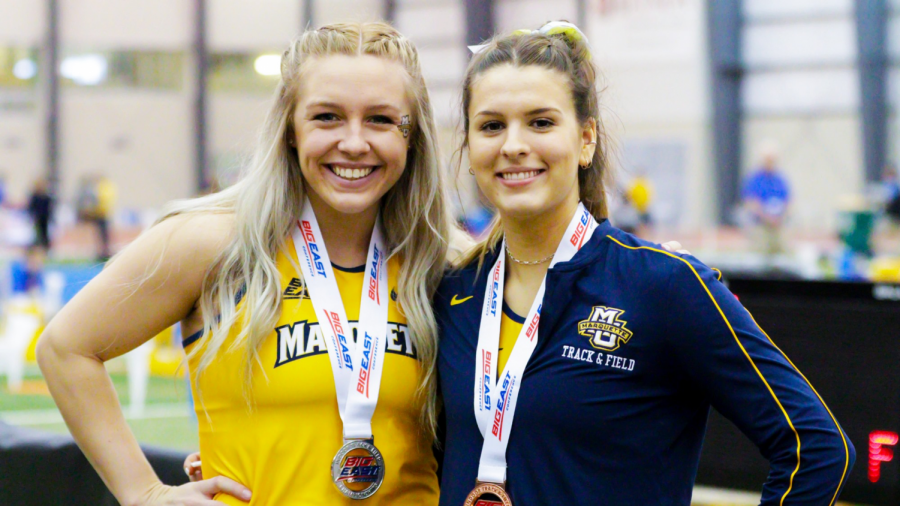 When senior Madison Marko started in the Marquette track and field program in 2016, she came in as a sprinter and a long jumper. As she progressed, it was clear she could be doing even more for the team, program director and head coach Bert Rogers said.

“We were mostly recruiting her as a sprinter, but as time went on we saw that she was just a really good athlete,” Rogers said. “She transitioned from sprints and long jump to the multis, and she got better as she went along.”

Marko was just one in a handful of athletes from both the men’s and women’s rosters to compete in the multis, which are comprised of the pentathlon in the indoor season and heptathlon in the outdoor season. She continued to do the long jumps and sprints alongside the event.

With the new assignment, Marko said she had to adjust.

“I had to learn high jump, hurdles, shot put and javelin,” Marko said. “I practiced with a lot of different groups, and training for all those specific events made me a better athlete overall and ended up helping me in the long jump and sprints.”

One example of how those new events helped Marko’s long jumping was when Rogers and assistant jumps/multis coach Rick Bellford noticed that Marko was jumping off the opposite leg that she did in the high jump, so they told her to try switching to other leg to match what she was doing in long jump.

“She was struggling a bit with high jump, and we figured out she needed the change,” Rogers said. “She improved a lot, then she even translated that over to her long jump and improved her jump by over a foot.”

Over time, Marko said that she became a much better athlete from when she was a first-year student and that working with a lot of different practice groups is to thank for that.

“As a freshman I never would have thought that I would be where I am today for sure,” Marko said. “Practicing for different events helped me get to know my teammates and understand all of their events better.”

Rogers also said that Marko being in many different groups in practice helped the senior — who was voted one of four women’s team captains this year — become more of a leader.

”She’s always been an awesome teammate and more of a leader by example but became more vocal as she got older,” Rogers said. “She was someone that I would go to for help organizing the team, and she would handle it. It was a big part of our success.”

All of her training and practice led to Marko’s last meet for her senior indoor season, the BIG EAST Indoor Championships in Geneva, Ohio. Marko went into the meet ranked No. 1 long jumper in the conference. However, when she saw the schedule, she saw the long jump was just 30 minutes after her fifth event of the day, the 800.

After talking to her coaches, Marko said she told them she wanted to do the long jump no matter what, so her plan was not to worry about her time and take it easy in the 800 race, the event before the long jump. That plan didn’t come into fruition though, because she ran a personal record time.

“Coach said to save my energy, but as I was running down the stretch I looked at him and he wanted me to kick into gear, and I ended up running a PR,” Marko said.

So after going against the original plan by giving it her all in the 800, Marko had to quickly rest and give her best in her favorite event, the long jump. She ended up coming just 0.1 shy of her PR length in the long jump and finished second in the event.

“I was exhausted, but I knew I had to at least try and score some points for the team,” Marko said. “This event was my chance to make the podium for an individual event for the first time, so I had to go for it.”

After indoor season ended, athletes were met with the cancellation of the outdoor season due to COVID-19. However, seniors have the opportunity to return for another outdoor season if they choose.

Marko said that she will not let the opportunity slide without trying to make it work but is unsure at this time if she will be able to return.

Marko said she plans to graduate in May with a degree in nursing and to enter the field shortly after. She said a potential way for her to return for one final outdoor run would be to pursue a graduate degree at Marquette.

“When I first heard the news, I thought I at least need to try to come back,” Marko said. “I haven’t heard any option to compete and not be in classes, but there’s a lot of logistics to work out.”

If Marko has competed in her last MU track and field event, Rogers said the team will miss a player who was a pleasure to coach.

”She was there every day, worked hard every day and encouraged her teammates every day,” Rogers said. “She’s very coachable, outgoing and just likes to come and work, which was so refreshing as a coach.”

Marko said she hopes her teammates and those in the program remember her for her upbeat attitude and level-headed mindset.

“Track can be a very mental sport, but I hope people would look back on me and think to always be positive during those tough times,” she said.

Marko said she is very pleased that she chose Marquette and could not think of a better place to be a student-athlete. More than anything, Marko said she is most thankful for the friendships she’s made through the program.