‘It felt like life or death’: Student, alum contract coronavirus 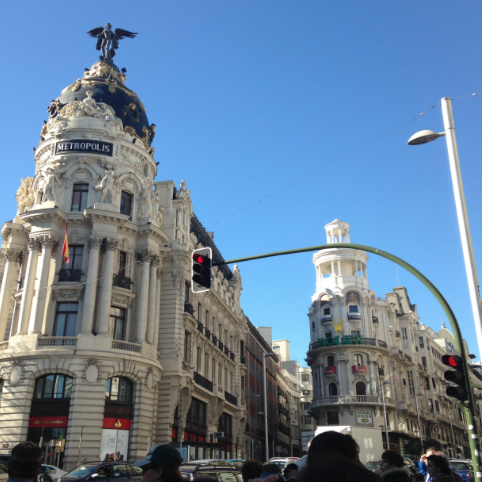 A student who visited Spain contracted coronavirus shortly after returning to the United States. Photo courtesy of Sophia Boyd.

A 10-day spring break trip to Spain was meant for sight seeing and visiting friends studying abroad for Olivia Mancheski, a junior in the College of Arts & Sciences.

At the beginning of the trip, she and a friend with whom she traveled abroad had minimal concerns about the coronavirus.

Then, the impact of COVID-19 was only just beginning to be felt across the world, its highest concentrated effects taking place in China and Italy. It had yet to spread to all 50 states in the United States.

“Until the last day I was in Spain, I was able to see everything,” Mancheski said in an email. “I was planning to leave on the Friday that things started getting crazy.”

Places started to close. People started to isolate in their homes. The United States was not going to accept flights from Europe.

While there, Mancheski visited places like the Prado, El Rastro Flea Market and Templo de Dubot. She traveled to Toledo and Segovia, taking in the atmosphere and creating memories with friends.

But when she eventually returned to the states, Mancheski said she felt like her entire body was shutting down.

“I had a pretty high fever for about a week, coughing and a sore throat,” Mancheski said in an email. She also said she was unable to eat.

It was a decision made by her mom and herself to call the Milwaukee COVID-19 Hotline.

“(We) agreed that it would be peace of mind for me to at least know what I had, but also can be used towards statistics,” Mancheski said in an email. “The elderly aren’t the only ones affected.”

Mancheski, who is self-isolating away from friends and family in her Milwaukee apartment near campus, called the hotline. The hotline then had a local doctor call Mancheski for further details about her symptoms.

The doctor told Mancheski that she most likely contracted the coronavirus and that the best thing she could do was to self-quarantine and take Tylenol.

“I couldn’t get tested because they are saving tests for high-risk groups and children and elderly,” Mancheski said in an email.

Across the country in Boston, 2019 Marquette alum Lucie Sullivan had just received her test results for the coronavirus through a phone call from her doctor.

“They said it was positive,” she said.

But Sullivan said the doctors didn’t give her much guidance since there is not much knowledge of or treatment for the virus yet.

Sullivan was tested for the coronavirus after traveling to London for work. She was there for one week and felt healthy the entire time.

It was on her way home that she said the president was starting to announce the United States’ approach to preventing the spread of the virus, which included the European travel ban.

Sullivan was with a co-worker on the trip, where they both decided to end it early. They were separated on two different flights back to Boston.

Sullivan said everyone was coughing on the plane, where she said she mostly likely caught the virus. None of her coworkers are symptomatic nor have tested positive.

“What else can you do but wash your hands at that point?” Sullivan said.

She said she went to bed feeling cold, but after an hour of sleep, woke up hot and feverish, tossing and turning.

Around 6 a.m., Sullivan decided to take her temperature.

Sullivan said she has had the flu and strep throat before, but she knew this was different. What she was feeling was not the same as other illnesses.

Sullivan experienced many symptoms that the Centers for Disease Control and Prevention includes on its website. She said she experienced a high fever, intense body aches and overall body fatigue.

After calling her co-workers and bosses for advice, Sullivan decided to go the nearest emergency room that was doing tests.

“(The test) was, like, really unpleasant,” Sullivan said. “They stick a swab really far up your nose.”

Yet, even after she tested positive, Sullivan did not feel any relief.

“It was like, ‘Well, thank you, that was completely unhelpful, I’ll just continue sitting here in agony,'” she said.

The doctors told Sullivan to try Tylenol or Advil, but even then, Sullivan was worried about what those medicines would do to the virus. She started to take Advil but stopped after she heard about how the medicine could possibly make the virus worse. There is no evidence that this is true.

Terrified, Sullivan said she was constantly on the phone with her parents. She said coming down with the illness that everyone was talking and stressing about made her exceedingly anxious.

Plus, it was the the first time she had been sick since being away from any family or close friends. From Chicago, Sullivan said this is the first time since graduating college that she is alone and taking care of herself.

Robin Brown, a staff physician and associate director for student wellness at the Marquette Medical Clinic, said isolation is not a method to cure the virus.

“Rather, it is a critical way to decrease the spread of the virus to family members and the community,” Brown said in an email. “Our body’s immune system fights the virus. We can support this process by making sure it has all the building blocks it needs, including good nutrition support, good hydration, and adequate sleep and rest.”

Brown said it is unknown exactly how much time elapses before someone is no longer infectious and that two weeks is the estimated time based on what is known about previous severe virus outbreaks, like SARS and MERS.

Another symptom Sullivan said she experienced was the extreme loss of smell and taste.

“It’s so weird,” she said. “When you have a cold, you have a depleted sense of taste and smell, but I can’t smell my coffee, and I can’t taste anything that’s really, really good. It’s really bizarre.”

Brown said other viral symptoms may be present, but cough, fever and shortness of breath are the symptoms that are being attributed to COVID-19.

In regards to nutrients and supplies, Sullivan said she feels prepared to isolate by herself in her Boston apartment.

“But, you’re never really prepared to deal with something like this,” Sullivan said.

Brown said the time it will take for the number of infected people to decrease to a level that will allow normal socializing and congregation is unknown.

The first confirmed case of the coronavirus in Wisconsin was reported Feb. 5. As of March 29, the state of Wisconsin has confirmed 989 cases, which includes 432 cases in Milwaukee.

“Patterns of infection are being watched closely in China and Europe so that projection for our timeline can be predicted to some extent,” Brown said in an email. “However, that timeline will be altered by our unique behaviors and adherence to social distancing.”

Brown said in an email “what we do as individuals will alter what happens to our populations as a whole.”

Both Mancheski and Sullivan have been in self-isolation since they started to feel symptomatic. After resting for numerous days, the two said they are feeling better and healthier than before.

Sullivan said if you are young and healthy and living without preexisting conditions, but you still get the virus, try not to panic.

“That’s what I was doing, I was panicking so much. It felt like life or death,” Sullivan said.

For Mancheski, she said she thinks she contracted the virus somewhere in Madrid, even though she said she was being cautious. One friend, whom she was visiting abroad, has shared many of the same symptoms as Mancheski and Sullivan.

“As much as I need to be social and surrounded by people, I understand how critical implementing isolations is during this time,” Mancheski said in an email. “The only way to end this pandemic is to keep people away from each other.”

Brown said going about life as before is not socially responsible at this time.

“Everyone just needs to stay home and continue to protect themselves and others,” Sullivan said.

Lucie Sullivan has previously worked for the Marquette Wire. She was not affiliated with the reporting and editing of this story.

This story was written by Natallie St. Onge. She can be reached at natallie.stonge@marquette.edu