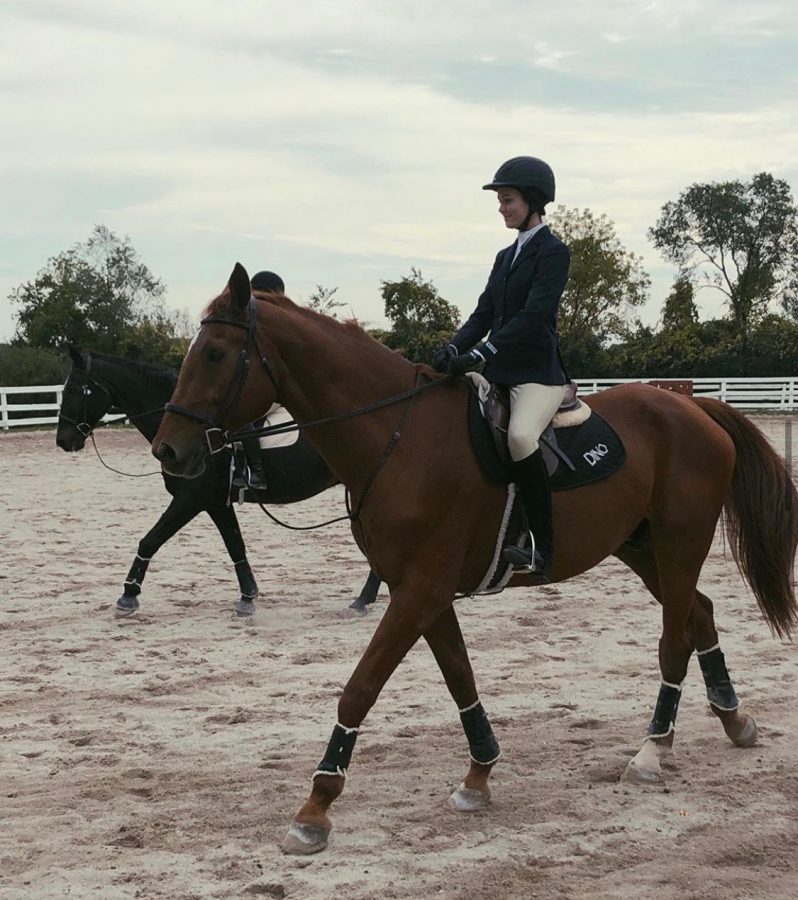 Along with club sports like baseball and basketball, there is a less well-known Marquette Equestrian Team.

MU Equestrian competes in the Intercollegiate Horse Show Association, or IHSA. The IHSA offers competitions in both Eastern and Hunter Jumper Equitation and the MU team rides Hunter Jumper Equitation, which is a discipline where the rider’s style, position and riding ability is judged in courses over fences and in classes on the flat. The riders compete in their classes individually, but their placings earn points for overall team rankings among the other colleges.

The classes are divided into six levels — Introductory, Pre-Novice, Novice, Limit, Intermediate and Open. The top three levels have classes over fences and on the flat and the lower three levels are on the flat. The rider is placed in a level by the coach and IHSA rules, based on previous experience riding, as well as experience showing at rated shows.

“There are six different classes ranging from beginner to expert,” Alison Vellender, a student board member for the Equestrian Club and a sophomore in the College of Communication, said. “The types of races range too: You can choose to do a course without obstacles or you can do one with jumps.”

No matter what level the rider is in, there is a challenging twist to IHSA competitions as horses are randomly drawn for competitors. The rider does not get to ride the horse before it is time to compete, so her or she is forced to ride an unfamiliar horse to the best of his or her ability and maintaining the best form while doing so.

“The horses at every competition are provided for the riders. That is what makes the competitions so different,” Vellender said. “You are focusing on how to ride the horse instead of being familiar with the horseback at the (barn), which can be very difficult at times.”

The Marquette Equestrian Club began as a recreational club that many people took on as simply an extra hobby, but eventually grew into a competitive and full-sized team. In 2012 they were founded as a club that trained at Seoul Creek Farm in West Bend, Wisconsin. A 2019 alum, Libby Sullivan, started the IHSA competitive team at Marquette in the 2018-2019 academic year, which only had five members at the time.

Membership in the club has grown from just five members last year to 19 members this year. Vellender said although the riding season has been cut short due to COVID-19, the club still saw success.

“From this past fall, we have been able to travel to many competitions around the Midwest and beyond,” Vellender said.

Within the IHSA, the team competes in Region 4, but said they haven’t let the challenges of being a fairly new team slow them down.

The team has traveled around the Midwest and have attended regional competitions in Iowa, Illinois, Wisconsin and Michigan. They placed 4th out of 12 teams in the region this season and three riders placed first.

Those three riders then qualified for the Zone 7 championships in Texas, where they would have had a chance to go to Nationals. However, COVID-19 altered those plans as the IHSA canceled all remaining equestrian competitions across the country for this season.

“We are sad our three riders who placed first in the regional championships weren’t able to travel to Zone 7 championships due to circumstances,” Vellender said.

Although the season had a tough ending to the spring semester just like many other college sports, the Equestrian team is prioritizing their health during this time and are excited for when they can return to the barn. They have already met some potential they are hoping to see this fall.

As much as competitions are important to the team’s culture, what makes the environment special is the friendships the riders have formed, Vellender said.

“We have gotten to bond with each other and become friends,” Vellender said. “Since the barn where the horses are is about 45 minutes away from Marquette’s campus, we have plenty of time to get to know each other.”

Morgan Campbell, the team’s secretary and junior criminology and history double major, said what makes Marquette’s team different are the lessons students learn through riding and the relationships they form. Campbell will be moving to the Vice President position at the end of this semester.

“My time on the equestrian team has been such a fun learning experience,” Campbell said. “From learning a new discipline of riding and showing in the IHSA making new friends and taking on leadership roles, it has been an absolute blast and I wouldn’t trade it for the world.”

For those who are interested in joining, the team accepts new members at the beginning of each semester, though the competition team is basically formed in the fall semester. Interested students can also connect with the club’s board members vida email, equestrianclubmu@gmail.com to get information and discuss experience. People interested can also keep up with the club’s Instagram or Facebook pages for team updates.

This article was written by Molly Gretzlock. She can be reached at molly.gretzlock@marquette.edu or on Twitter @MollyGretzlock.