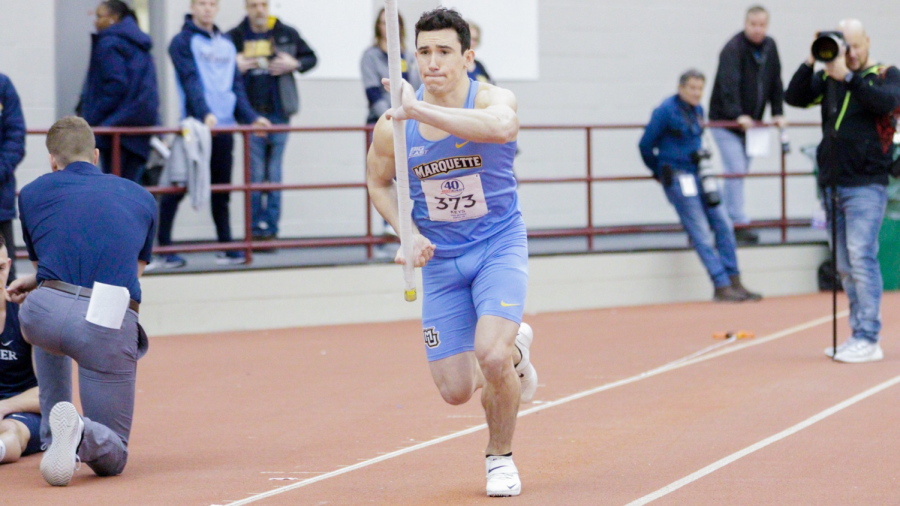 The sports world went silent March 12 when the coronavirus pandemic led to the postponement of all major professional sports leagues and collegiate athletics throughout the United States.

It was on this same day that NCAA President Mark Emmert and the Board of Governors canceled the Division I men’s and women’s remaining winter and spring NCAA championships. The 2019-2020 Track and Field season was over for Marquette student athletes including junior Joe Keys, who was scheduled to participate in the NCAA Indoor Championships the very next day.

Keys was the only Golden Eagle who qualified for the Indoor Championships that were to be held in Albuquerque, New Mexico.

He was scheduled to compete in the heptathlon, an event he’s been successful in all year. This season, Keys broke his own Marquette record in the heptathlon by over 300 points at the Windy City Rumble Feb. 7-8 in Chicago. Keys’ program record of 5,667 points qualified him for nationals and ranks him No. 11 in the country for the heptathlon.

Keys, along with a few of his assistant coaches flew out to the championships March 11. He got a workout in that night, and early the next morning he heard the news. He wouldn’t be able to compete in the event he’d waited his whole life for.

“I was in complete shock when my coaches first told me and then seeing the news about the cancellations all over social media,” Keys said. “I didn’t even think about it being cancelled. Everything within three to four days got out of control which ultimately led to its cancellation.”

Before the complete cancellation of the NCAA Indoor Championships and the remaining spring championships, there were talks of holding the event without spectators, similar to what many Division 1 men’s and women’s basketball tournaments had planned on doing.

“I was told it was going to be only family and no spectators at the event, but then I found out it was cancelled in general later that afternoon,” said Keys.

Although the coronavirus pandemic has abruptly ended Keys’ and the rest of the Golden Eagle’s track and field seasons, Keys said he is focusing on the positives right now rather than the negatives and the “what-ifs.”

“I see this as an extended offseason of some sort. I’m going to pretend like it’s summer training just a few months earlier. I have an eight-month offseason to help me recover and get better for next season,” Keys said. “At this point I’m just trying to look at all of the positives and become one of the best athletes in the nation next year.”

“I feel bad for Joe, but I know that he’s going to get through this,” head coach Bert Rogers said. “I already talked to Joe after what happened, and I know he’s fired up for next season and that he’s going to be so much better as a result of this.”

As the result of the coronavirus pandemic, Marquette sent students home for the remainder of the spring semester, which means many student athletes are stuck at home without access to the equipment that helps train them for specific events.

“We’re not requiring them to do things over this extended break, but we will give them offseason workouts just like every other summer,” said Rogers. “A lot of the gyms are closed, which affects weight training, so it’s a matter of doing the best they can with what they have.”

After the cancellation of the remaining spring NCAA Championships, the NCAA announced that they will grant an extra year of eligibility for all DI spring sport athletes. But with most seniors planning on graduating in a couple of months, many athletes’ collegiate days will end sooner than expected.

Although their season was cut short, the Golden Eagles came away with a handful of accomplishments this season. Both men’s and women’s teams took home second place finishes at the BIG EAST Indoor Championships and several athletes broke school records.

“I’m very proud of what our team accomplished throughout the season,” said Rogers. “Our women’s team made huge improvements from last season and that showed in the results this season by finishing second at BIG EAST Indoors and our men’s team did the same by competing for a BIG EAST title.”

Keys will now look to build off his historic season for Marquette and return to the national stage for his senior season next year.

“Looking back at the season, I’m most proud of my performance at the Windy City Rumble,” Keys said. “I’m from the Chicago area and I had a lot of friends and family there to support me while breaking the school record so that was very special to me.”

This story was written by Sam Arco. He can be reached at samuel.arco@marquette.edu and on Twitter @sam_i_am119.