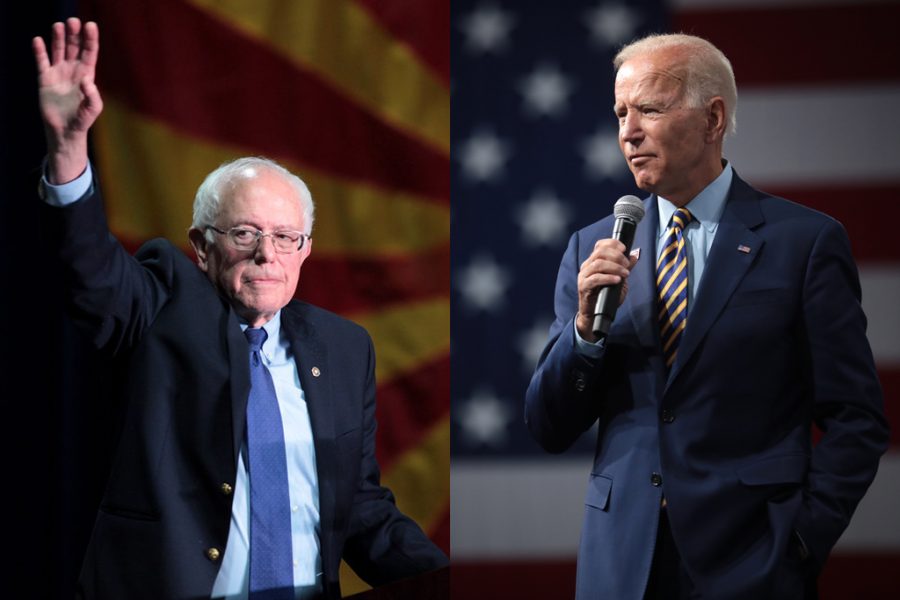 Students voiced their opinions about specific issues that the democratic primary candidates Bernie Sanders (left) and Joe Biden have focused on. Photos courtesy of Flikr

Marquette Law School’s most recent poll from February has Senator Sanders being a 14 point favorite to win the Wisconsin primary. Sanders was trailing Bided by 4 points in the month of January.

A recent national poll from Emerson College includes issues that some Marquette voters have voiced their concern about, the most primary being novel coronavirus. The poll reported that 70% of respondents were very worried or somewhat worried “that they or an immediate family member may catch Coronavirus,” with a margin of error of 2.9%.

As of March 30, the coronavirus has infected nearly 700,000 people, with numbers increasing each day according to the World Health Organization. The Centers for Disease Control and Prevention reported over 150,000 U.S. cases as of March 31, with over 1,200 cases in the state of Wisconsin.

One Marquette student voiced their concern for the cost of combating the coronavirus.

“The candidate needs to show they are willing to take on the pharmaceutical industry … especially after a cure for COVID-19 is found,” Elizabeth Grout, a first-year student in the College of Communication, said.

Grout said there needs to be regulation for the pharmaceutical industry “more than ever” especially after COVID-19 due to the potential price gouging of medicine that could occur.

Price gouging, as defined by the New York Times, is an unreasonable increase in the price of a certain item or good during times that it may be desperately needed, such as medicine during a worldwide pandemic.

In response to the coronavirus outbreak, Bernie Sanders posted “An Emergency Response to the Coronavirus Pandemic,” on his campaign website, in which he directly calls for pharmaceutical companies to stop price gouging.

Sanders said any medicine in response to this crisis should be free. Meaning that anyone under medicare, regardless of existing coverage, Americans would receive treatment, testing and an eventual vaccine for free.

Sanders has received over $400,000 from pharmaceutical companies, according to The Center of Responsive Politics.

Biden, whose campaign has received over $1.3 million  from pharmaceutical companies, according to OpenSecrets.org, said he will “task the U.S. Department of Justice with combating price-gouging.” Biden also said he heavily supports the government working closely with the private sector to distribute critical health care supplies.

Biden’s website on the coronavirus also calls for the “elimination of all cost barriers to preventive care and treatment for COVID-19; the development of a vaccine and the full deployment and operation of necessary supplies, personnel, and facilities.”

Students have also voiced their concerns about gun regulation.

“With gun laws, I’d like to see stricter policies,” Zoee Arreguin, a first-year student in the College of Communication, said. “It’s necessary, in my opinion, to at least strive toward betterment in those areas.”

Biden calls gun violence in our nation an “epidemic” on his website. The former vice president worked with Senator Chuck Schumer (NY-D) to pass the Brady Handgun Violence Prevention Act, which helped to establish the modern-day background check system for buying and selling handguns in the United States.

Biden said he plans to put more regulations on background checks, such as incentivizing states who put in “extreme risk laws.” The Giffords Law Center defines extreme risk laws as legislation that temporarily allows law enforcement or family members to remove individuals’ access to firearms if they may be going through a crisis or pose a danger to themselves or others.

Biden also said he will work toward the ban of manufactured and imported assault weapons and high-capacity magazines as well as a “buy-back system” that will give gun owners who possess assault weapons and high-capacity magazines the ability to sell them to the government or to “register them under the National Fire Arms Act.” according to his website.

The National Fire Arms is an act that requires the registration of fully automatic weapons, rifles, and shotguns according to the NRA’s website.

Sanders’ plans includes a buyback program similar to Biden’s, according to his website’s section on Gun Safety.

The senator’s website also calls for the end of the “gun show loophole,” which is that people can buy guns at gun shows without a background check. Sanders also plans to “completely ban the sale and distribution of assault weapons.”

Another key issue surrounding the election is whether to keep American troops in the Middle East.

“We don’t want a situation similar to the Iraq War where we spend pointless money and get innocent lives killed,” Joe Delia, a sophomore in the College of Business Administration, said.

Both candidates have different stances on this issue. In the Jan. 14 Democratic debate, Joe Biden said that he “would leave troops in the Middle East” because he feels the next president has to “reestablish our alliances with European countries.”

Biden believed this can be done by “applying pressure” on Iran to go back into its nuclear agreement that it pulled out of in May of 2018.

The Nuclear Agreement, according to BBC, is an accord that Iran agreed to “limit all sensitive nuclear activities” and to shut down various nuclear facilities.

According to an article by The Atlantic, Sanders said he would pull “all troops from Afghanistan, Iraq, and Syria by the end of his first term.” Sanders also said in the same Jan 14 debate that “Americans are tired of endless wars that cost trillions of dollars.”

America’s eyes will shift its attention to Wisconsin April 7 as it takes the national stage for another presidential primary.

A New York Magazine article dubs Wisconsin as a potential turning point state for the election and predicts that because of the large influx of absentee ballots due to the coronavirus, it could also be the source of controversy.

This story was written by Ben Wells. He can be reached benjamin.wells@marquette.edu.