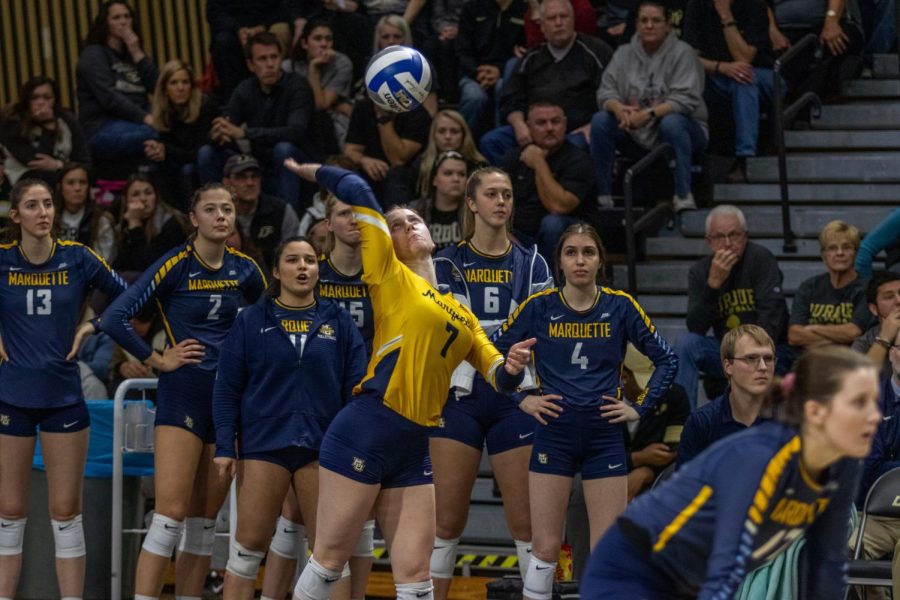 Martha Konovodoff (7) attempts a serve in Marquette's loss to Purdue in the NCAA Tournament Dec. 7, 2019.

The COVID-19 crisis has shut down professional sports seasons and even March Madness, so it was no surprise to find that collegiate spring sports were next.

Marquette volleyball head coach Ryan Theis said he was not surprised about the cancellation of the remainder of the 2020 season for spring sports.

“I just don’t think there’s any other choice,” Theis said. “Professional sports ending (and) traveling stopping, it wouldn’t be a very good optic to be playing sports when no one else is.”

Marquette volleyball junior libero Martha Konovodoff said she first found out about the cancellations on Twitter.

“Immediately when I found out, I just had a wave of just, ‘What am I going to do?’,” Konovodoff said. “It was such a shock for me because I had planned mentally to be away from everyone for a week and then having to be away for longer than that has obviously messed up a lot of peoples’ schedules, especially with the fact that being athletes, our whole lives are schedules.”

Unlike spring sports, volleyball is currently in the offseason. The team isn’t missing any matches, let alone conference or NCAA championships.

“The administrators and the BIG EAST and the NCAA are all working together on, ‘What can we do workout-wise? What can we require from our student-athletes that aren’t here but they’re taking classes?’ We’re just learning that as we go,” Theis said.

Konovodoff said after her and her teammates found out they wouldn’t be able to train this season, Theis reached out to everyone asking for suggestions on what they can do to stay ahead of some of the teams they played last season.

“What can we do right now that can put us in a position to win a BIG EAST Championship?” Konovodoff said. “Just because this is very inconvenient and this is just not what we planned on, it’s just a matter of adapting to it and staying with it.”

The team is not able to see each other on a daily basis, but Konovodoff said they’re keeping in contact by sending schedules and videos to each other.

“Women’s soccer tagged us in something on Twitter to see what kind of activities can we do volleyball-wise with each other and so we’re trying to do fun stuff that keeps us in (contact) and making sure that everyone stays mentally healthy,” Konovodoff said.

The NCAA announced via Twitter March 13 that they are implementing an immediate ban on in-person recruiting, which includes suspending official and unofficial campus visits from the prospective recruits. According to the statement, the “recruiting dead period will be in place until at least April 15, at which time the Division I Council Coordination Committee will evaluate.”

While Theis and his staff usually recruit players a few years ahead of time, he said this mostly impacts transfers and international players.

“International players are typically late in the game and transfers went on the portal and hoped to be visiting some schools this spring and they’re being told they can’t visit anywhere,” Theis said.

Despite this being a difficult time for athletes, Konovodoff said she completely agrees with the NCAA and BIG EAST’s decision to cancel spring sports.

“Health of athletes, health of spectators, health of coaches and everything, even rest, comes first. These are human beings with health that need to be looked at with priority,” Konovodoff said. “At first everyone was shell-shocked, but them taking this step was the right step for sure.”

“It hurts the development, especially of your younger players. There are things we should really be working on right now with Hannah (Vanden Berg) and Claire (Nuessmeier) as freshmen,” Theis said. “It’s the same for every team. Every volleyball coach is twiddling their thumbs and angry that they can’t get their freshman outside hitter better. … We’re all in the exact same boat. It is what it is.”

With players not being able to prepare for their upcoming fall season to the fullest extent, Konovodoff echoed her coach’s sentiment that every team across the country is facing the same challenges.

“We’re all just kind of in a position where this is extremely inconvenient and it’s understandably understood,” she said. “We all know why this happened the way it did.”

Theis said currently he is not aware if the NCAA is going to create any waivers for practicing over the summer, but he hopes his team will be able to train by the Fourth of July.

“We hope that this is all cleared up by summer,” Theis said. “The bigger effect on volleyball would be no fall sports either and then we’d be in the same boat as everything going on in the rest of the country.”

Through her family, Konovodoff said she has seen COVID-19 affect more than just sports. Her parents, along with her and three siblings, are home. But her older siblings aren’t.

“My sister’s stuck in Chicago. My other sister’s stuck in New York. They can’t move, they can’t do anything,” Konovodoff said. “Everyone’s having inconveniences. Everyone’s dealing with problems way bigger than mine. It’s really hard to be selfish. … For me, it’s just widened my perspective of seeing how big something can be if everyone just joins in and does it right.”