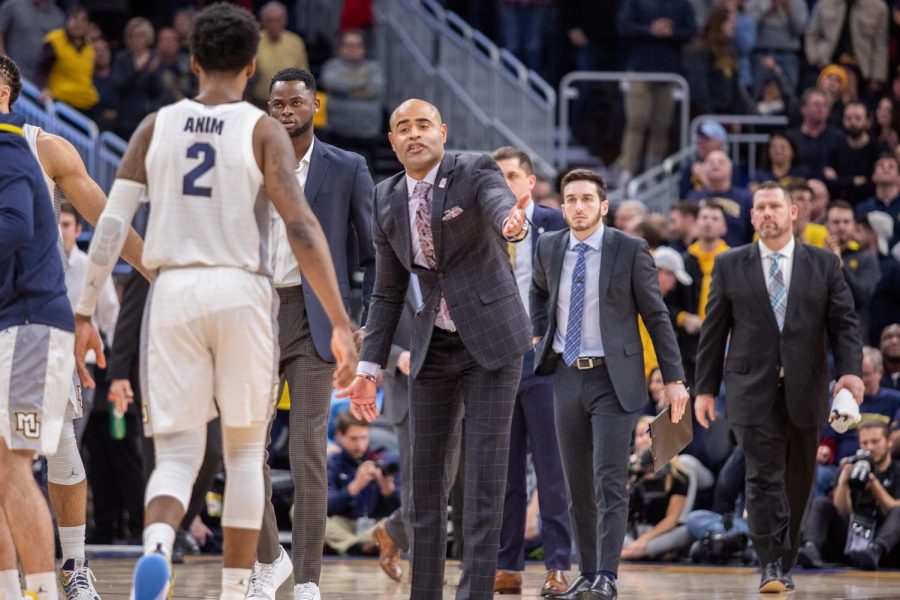 Stan Johnson (center) coaches from the sidelines in Marquette's loss to Providence Jan. 7.

“Stan has tremendous vision for the future of LMU men’s basketball, and he has the distinct ability to connect with and inspire student-athletes on and off the court,” Pintens said in the statement.

The 2019-20 season was Johnson’s fifth with the program after being promoted to associate head coach in June 2017. Over his tenure with the Golden Eagles, he helped lead Marquette to three postseason appearances: two trips to the NCAA Tournament in 2016-17 and 2018-19 and a 2017-18 National Invitation Tournament quarterfinals appearance.

“I’m truly honored and blessed to be the head coach at one of the elite academic institutions in the country,” Johnson said in the statement. “I’m most excited by the opportunity to connect, coach, and develop our current and future players, in order to create a program that our fans, university and community can all be proud of. We have a tremendous opportunity, in one of the best leagues in America, to do something special. I’m excited to attack that challenge together.”

Johnson played for three seasons at South Utah University. As a captain in 2000-01, he led the Thunderbirds to a Mid-Continent Conference — now Summit League — championship and an NCAA Tournament berth. The Taylorsville, Utah, native was a three-time All-Academic Team honoree and earned a bachelor’s degree in communications in 2003.

His final year of eligibility was spent at Bemidji State, averaging 13.5 points per game. As a captain, he contributed a team-high 114 assists and earned all-conference honorable mention.

“I knew Stan first. As Stan came aboard as an assistant coach at the time, he had a great relationship with Markus and the Howard family,” Wojciechowski said Feb. 27.

When Howard was a junior at Findlay Prep, he said Johnson was the one who suggested graduating early and starting college in 2016.

“That played out pretty well for myself,” Howard said Feb. 27. “He was always trying to put me in the best position. Our relationship’s grown over the years. I’m really fortunate and blessed to be able to have somebody like him in my life who I consider like family. … It started when I was younger, but it’s continued to grow and evolve and me and him are as close as ever.”

Not only has Johnson impacted Howard on the basketball court, but he has also played a big role in Howard’s faith. The Chandler, Arizona, native had Johnson as a special guest back in November to talk to the Fellowship of Christian Athletes chapter Howard co-founded.

“Basketball is something in itself, but just as a man, as a man of God, he’s been such a big influence to me,” Howard said Nov. 3. “One of the first things I questioned when coming to school is, ‘Where am I going to go to church?’ The first week I got here, he was the person who took me to church with him.”

Howard said Johnson has influenced him and his teammates because they are able to see the man Johnson is on a daily basis.

“He’s done so much for me in terms of just my growth on and off the court,” Howard said Nov. 3. “I’m truly blessed to have someone like him in my life.”

This story was written by Zoe Comerford. She can be reached at [email protected] and on Twitter @zoe_comerford.