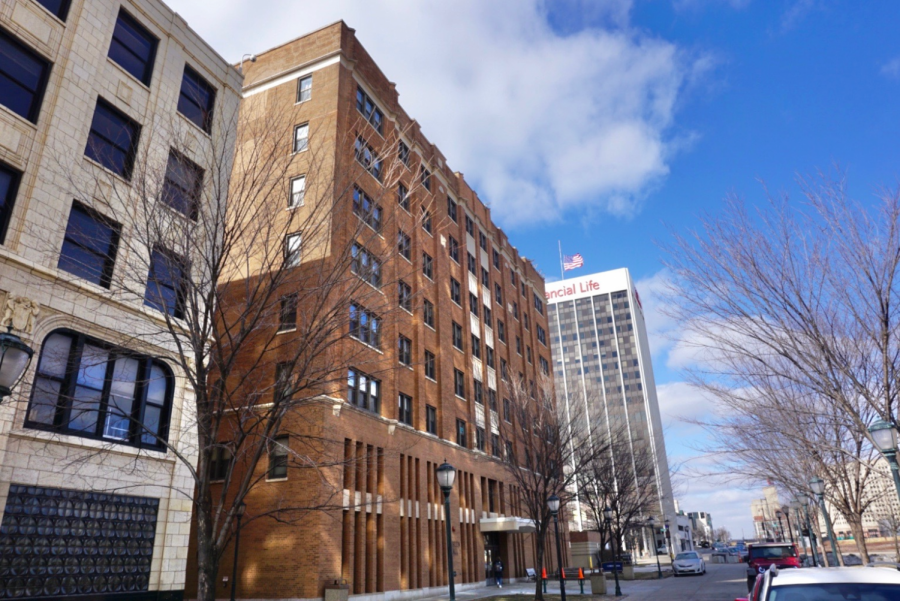 Ellie Marino, a junior in the College of Arts & Sciences and a resident assistant in Mashuda Hall, was in New York City with the Marquette University Pep Band for the BIG EAST Tournament when Marquette announced its plans to navigate the COVID-19 pandemic.

The statement, which Marquette emailed shortly before noon Thursday, March 12, said that students living in on-campus residence halls and university-owned apartments should not return to campus before April 10. It said that students living in off-campus housing “are asked to use their best judgment on whether to return and to avoid campus facilities to the extent possible.”

However, a majority of students living in residence halls are not able to live on campus during this time. Residence Halls opened from 8 A.M. to 4 P.M. on Sunday, March 15 for students to come and gather any belongings out of their room that they planned to need before April 10. They also had access to their mail and packages at that time.

Marino said students picking up their belongings on Sunday had to check in with the front desk to be let in. She said any student that came from an area that was determined by the CDC to have community spread of COVID-19 was not permitted to enter the building.

The university’s statement emailed March 12 also asked that any student, faculty or staff member who has traveled outside of the United States or to areas within the United States with high levels of outbreak to self-quarantine for 14 days before they return to campus. Any visitors to campus are also asked to follow the same guidelines.

Nolan Cox, a sophomore in the College of Nursing, lives in Straz Tower. He said he was on a spring break trip in Arkansas with the Marquette University Rock Climbing Club when Marquette announced its plans to alter learning moving forward on Thursday.

He said the group had limited access to internet, but after hearing the news they “called (the trip) off a day or two early, and went back to campus and dropped people off.”

Cox said he stayed with upperclassmen for two nights, then got into his dorm room on Sunday to gather his belongings before driving home to Grand Rapids, Michigan.

While Cox said he hopes school will resume as normal in April, he said it feels like everything is up in the air.

“I’m hopeful that we still get to finish the last couple weeks of the semester in-person,” Cox said. “But I know that other colleges have completely canceled the rest of in-person classes for the semester … I’m hopeful but I’m not super convinced.”

While Marquette’s March 12 statement said that students in university-owned apartments are also “directed not to return to campus before April 10,” university apartments remain open, Marino said.

Despite being an RA, Marino said she found out about the changes on March 12 at the same time as the rest of the Marquette community. Still in New York City, she said she was initially uncertain of how to answer the barrage of text messages she received from residents with questions.

“It was literally the most hectic two hours of my life,” Marino said.

Because New York is one of the “current states with community transmissions,” according to the university news release on protocol for returning to campus, Marquette required all students, faculty and staff coming from that area to self-quarantine for two weeks upon returning home.

After just arriving in New York Wednesday, Marino and other members of the band took flights home Thursday night and were instructed to immediately self-quarantine for 14 days.

Marino said RAs received an email from the Office of Residence Life that said RAs are permitted to live in their residence halls during the university’s hiatus from in-person classes if they get permission from the office. Marino responded to the email, requesting permission to move back to Mashuda once she completes her 14-day quarantine back home in the Chicago area.

However, Marino said ORL informed her that she may not be able to move in to her residence hall at all if she could not do so by March 16. Marino said she is now in a difficult situation because she has a job in Milwaukee that she is supposed to start as soon as she can after her self-quarantine period, but with potentially no place to stay, she is uncertain of what she will do.

Emanuel Wasson, a senior in the College of Engineering, was also with the band in New York when the BIG EAST Tournament was canceled and Marquette required all individuals on university-sponsored travel to come home.

Wasson is currently completing his 14-day self-quarantine at his off-campus apartment in Milwaukee. He said staying in Milwaukee during his self-quarantine period was a better option over returning home to Houston, where he lives with his grandmother who is at a greater health risk if she were to contract the virus.

“To be honest, I was a little agitated that we went to New York in the first place because I had a good idea that all these things would happen,” Wasson said. “If I wasn’t in this situation, I would have more peace of mind knowing that I probably wasn’t sick, and I’d be probably more comfortable probably going home, but with all this … I don’t feel comfortable going home exposing other people or being around people right now.”

Beyond housing, Wasson, along with the rest of the student population, faces inconveniences and disappointments during this time.

As a senior, Wasson said he is disappointed about missing his final chance to play with the band for the men’s basketball team, uncertain about how his engineering senior design project will work moving forward and concerned about how this will affect graduation. As a first-generation college student, Wasson said the effect on graduation is a big worry.

“If things are like they are right now, and if they get worse, the whole process of graduation is just, I don’t know, a big deal,” Wasson said. “Graduation was really going to be a big celebration for me and my family. So just that whole idea of that being kind of questionable, it’s all I’m kind of worried about.”

Like Wasson, other students are electing to stay on or near campus rather than make their way home.

“I’m from San Antonio, Texas. So it’s not feasible for me to go home right now,” Julianna Salas, a junior in the College of Engineering, said. “I feel like it’s more dangerous for me to try and fly home and risk coming in contact with people than it is to stay.”

Salas is on co-op this semester at Microtech, LLC, a medical devices company in Kenosha. She has been living in her sorority’s housing this semester and plans to continue to live there while in-person classes on campus remain suspended.

Salas remained on campus over spring break while she continued working, and she plans to continue working and living in Milwaukee. She added that her company is continuing to work as normal, with some extra precautions like instructing employees to not come in if they show any signs of illness.

Salas said she has been in contact with the university and her national sorority leaders to let them know about her situation and why she is staying on campus.

The Office of Residence Life and University Apartments Staff were unavailable for comment.