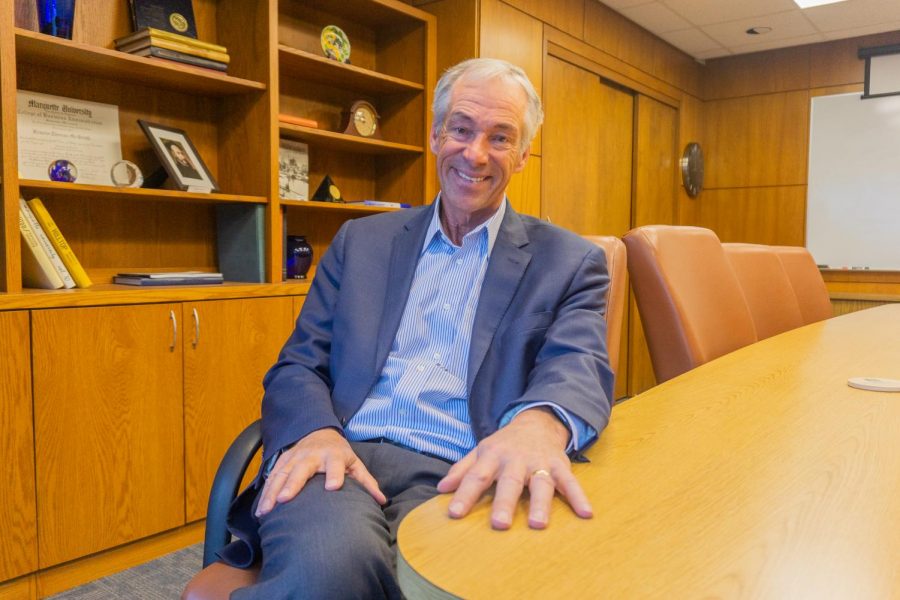 Tim Hanley has begun transitioning to interim dean for the College of Business Administration.

Previously executive-in-residence for the college, Hanley worked on engaging the College of Business Administration with the local business community.

Looking to the future of the college, Hanley said he hopes to continue Daniels’ vision.

“I have to tell you what immense respect I have for Joe, and I spent a lot of time with him,” Hanley said. “We communicated almost daily about things that he wanted my perspective on, ways I could help him find companies to potentially meet.”

He said Daniels had a strong vision for the future building for the College of Business Administration, which will be located where McCormick Hall formerly stood. He said Daniels’ plan for the building would help distinguish Marquette as a business school destination.

Daniels played a large role in the fundraising for the $70 million building. During University President Michael Lovell’s annual address in January, Lovell said that $44 million had already been raised.

Hanley plans to continue trying to build relations with donors. He said he wants to honor Daniels’ legacy.

“I think he laid the road map, and we want to deliver the road map for the university,” Hanley said.

He also said he needs to plan strategies about what will occur in the actual building, including structure and organization.

Hanley said he is looking forward to his new role and the ability to work with so many individuals he respects.

Hanley’s 40 years of experience in business includes being a senior partner at Deloitte, a business management consultant in Milwaukee. He said he used this experience to create network opportunities for students to interact with people in the business field in and outside of the classroom.

He added that as executive-in-residence, he often spoke in the classroom about subjects that professors felt he could provide insight on. Hanley said his lecture topics included leadership and career strategy.

Though Hanley said he could not take on the commitment of teaching due to his other responsibilities, he enjoyed being available to speak in classrooms, as well as speaking to students individually about career advice.

David Krause, the director of Applied Investment Management program, worked with Hanley to organize a major College of Business Administration event in conjunction with the Chartered Financial Analyst Society. Krause said the event was highly successful, and Hanley did well managing the event.

“I know (Hanley) is outstanding with strategy development and execution — and I believe he will be successful in carrying out the vision that was championed by Joe Daniels,” Krause said in an email.

Krause added that Hanley has exceptional communication skills and an easygoing style that makes him look forward to working with the new dean.

Provost Kimo Ah Yun said he met with the executive council of the College of Business Administration as well as the rest of the faculty in the college to get feedback before hiring the new interim dean.

Ah Yun used that feedback, considering personal values and what the college needed, to zero in on Hanley.

The provost also said he decided to hire an interim dean rather than a permanent dean because the timing was not ideal. He said a search for a permanent dean would likely lead into summer and most candidates for these positions have been hired, so it would be difficult to immediately find candidates.

Ronnie Ortiz, a sophomore in the College of Business Administration, said he felt that Hanley was a good choice due to his connections to the business community.

The sophomore said he is excited for the business school to see changes and new opportunities.

He also said the Entrepreneurship Center is in the 707 Hub, separate from the rest of the school, making it feel disconnected.

This story was written by Annie Mattea. She can be reached at [email protected]