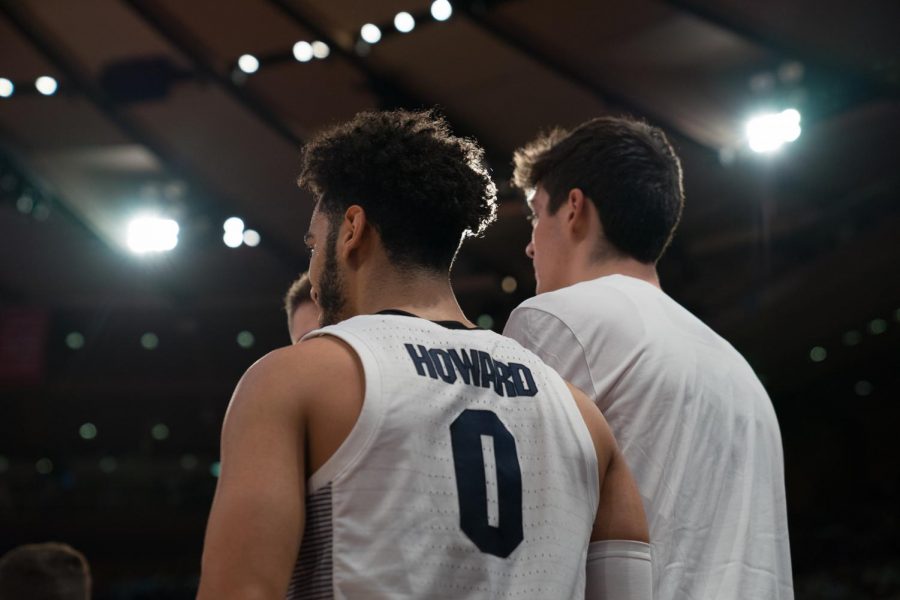 NEW YORK CITY — With No. 9-seeded St. John’s leading No. 1 Creighton 38-35 at halftime, the conference decided to cancel the BIG EAST Tournament due to the coronavirus outbreak.

“We’re living in unprecedented times so some crazy things happen,” Creighton head coach and BIG EAST Coach of the Year Greg McDermott said in a press conference Thursday. “Today was one of them.”

Marquette’s game against Seton Hall was originally slated for 9:30 p.m. Thursday, but with the COVID-19 decision, senior guards Markus Howard and Myles Powell will not be able to duel for the 11th time.

“So we have, here in the 2020 Big East Tournament, we have two completed games. We have half a game. And that’s all we’re going to have in 2020,” BIG EAST Commissioner Val Ackerman said in a press conference Thursday. “I’ve got to tell you, it breaks my heart. This is the greatest college basketball tournament ever. But we respect the decision of authorities. We’re very mindful about what’s happening nationally. We do not want to be imprudent as it relates to the safety of our participants and our fans.”

This follows suit of other major conferences, including the Power 5 leagues, which canceled their respective tournaments Thursday morning.

“It’s terrifying, frankly, what’s evolving here as the science and the assessments of the science are progressing. And I don’t think any of us know what’s going to happen tomorrow,” Ackerman said.

Even the Atlantic-10 Conference called their tournament two minutes prior to tipoff. The BIG EAST though, began at noon without fans — as scheduled. Ackerman said the trauma the student-athletes were going through also played a part in the decision.

“For us to sort of have Garden security march out on the floor pull them into locker rooms didn’t make sense to us,” Ackerman said. “We didn’t feel like we needed a dramatic, pull-the-players-off-the-court-in-the-middle-of-the-game gesture. Folks were here. We just literally didn’t think that another 15 or 20 minutes of game time was going to make that much of a difference.”

Following halftime, Ackerman said they didn’t think it was appropriate to send athletes back to the court either.

“It was a judgment call that we made,” Ackerman said. “We didn’t believe it made sense to pull them out after halftime either and send them out there. That was a decision we made, and we stand by the decision.”

The city of New York has yet to make an announcement, but Ackerman said that will be forthcoming.

The NCAA Board of Governors had met with the NCAA medical director Monday who told them that “the NCAA was not planning any adjustments to their tournament at that time.”

“We all reacted yesterday, of course, to the NCAA’s news, based on the opinion of its medical experts, that it was going to adopt a restricted attendance policy for the NCAA Tournament,” Ackerman said. “They were not talking at that point about canceling the NCAA Tournament and none of the conference’s.”

Wednesday evening Ackerman said she was on the phone with commissioners from the other major basketball conferences who were also adopting the restricted attendance policy as a precautionary measure.

Following that call, Ackerman said there have been a lot of meetings within the BIG EAST to decide the best course of action.

“As recently as 10:00 this morning, as I’m running this meeting, we had no idea that these developments were going to transpire with conference tournaments,” Ackerman said. “Our meeting broke up a little bit before noon, and that was when we heard literally for the first time that other conferences were beginning to make this move.”

Once other conferences started canceling their tournaments, Ackerman said she connected with one of the other conference commissioners to hear his reasoning. She said the city where that tournament was held had directives that were driving those decisions.

“I then reached out to a contact that I had established over the last week with the City of New York, in the Office of Emergency Management … and learned that New York City is, in fact, very shortly going to be bringing forward directives related to large gatherings here in New York,” Ackerman said. “(Three hours) ago, I was learning for the first time that the city now … is prepared to act in the same way that some of the other major urban markets are acting.”

Once she heard New York was going to take action, play had already begun at Madison Square Garden. She then conducted a conference call with all the presidents and athletic directors of the BIG EAST schools.

“When we alerted them to what was happening with other conferences … and importantly because of guidance that we were — just today, the first time — getting from the City of New York, it would be prudent to cancel the remainder of our men’s basketball tournament,” Ackerman said.

According to Ackerman, the NCAA staff that the BIG EAST looked to for guidance from on a video conference with the conference’s presidents “did not let on that even they knew that some of these moves were being made by these other conferences.”

Ackerman calls recent events the “most extraordinary stretch of days I’ve ever had or ever seen in my 30-plus years of working in the sports business.”

Regardless of what happens next, the past 24 hours have been hectic for the sports world. First, the NBA postponed the remainder of the 2019-20 season.

“The NBA decision was in part driven by a positive Coronavirus test as well by an athlete, which we don’t have in the BIG EAST,” Ackerman said. “So they were operating on a slightly different fact set. And all I can tell you is based on the information that we had at the time last night we thought it was prudent to move forward with limited attendance, which we did. But we were prepared to adjust as needed, and that’s what we’ve done now.”

The athlete who tested positive for COVID-19 was the Utah Jazz’s center, Rudy Gobert. The Jazz, though, had just played the New York Knicks at Madison Square Garden March 4.

“This is generally what happens is they exhibit signs of sickness, they’re tested. If they’re exposed to individuals who have tested positive, then we’re just following the guidance of everyone in terms of the directives issued by the CDC and the New York City Department of Health. We’re not aware of any positive tests of any athletes in the BIG EAST,” Ackerman said.

In recent hours, the MLB and NHL have been suspended indefinitely, along with the MLS being suspended for 30 days. Duke University even removed themselves from the NCAA Tournament.

“My prediction is if things escalate in this country, as we’ve seen in other parts of the world, I suspect it’s going to be very difficult for them to hold onto the NCAA Tournament as planned,” Ackerman said.

McDermott said he hoped it wouldn’t be a cancellation.

“I hope we find a place in the calendar to play it. I just think it’s a great event. There’s a lot of teams that have earned the opportunity to do that,” McDermott said.

But the NCAA has not yet decided whether to cancel March Madness or not. Ackerman said, after talking to the NCAA Thursday morning, the association is monitoring the situation hour-by-hour.

“Frankly, we know more today than we did a week ago or the week before. And we’ll know more a week from now. And so that’s why I’m the last one to be able to opine on what’s going to happen to the NCAA Tournament that’s supposed to start next Wednesday,” Ackerman said. “So as it relates to the NCAA Tournament, spring championships, et cetera, I just predict that we haven’t seen the end of this. It’s going to be a fast-moving set of circumstances. And we’ll be doing our best to keep up and to do what we have to do as a conference to adjust accordingly.”