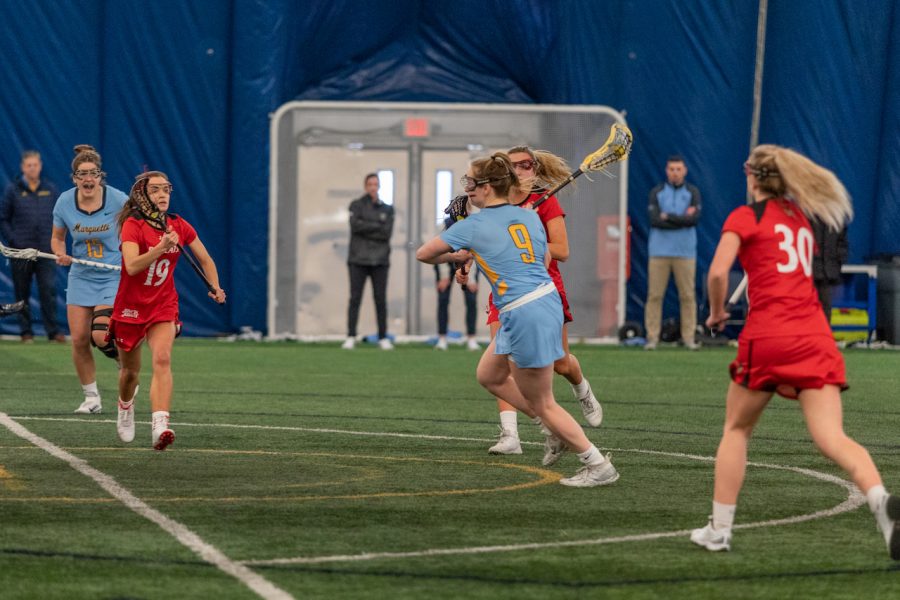 Megan Menzuber (9) shoots the ball in Marquette's 17-6 win over Cincinnati on Feb.14.

After losing to Ohio State University on Saturday, Marquette women’s lacrosse rebounded against Detriot Mercy, earning a dominant 23-12 victory on the road.

“We started off a little bit slow but we were able to find our footing and get the offense going,” senior midfielder Megan Menzuber said in a statement. “We took a bunch of the adjustments from the coaching staff and started winning draw controls and moving the ball. It was fun to see us get rolling in the second half.”

For most of the first half, the Golden Eagles and the Titans played in a close battle. MU led just 6-4 with just under seven minutes left in the half.

A 5-1 scoring run to finish the first half propelled Marquette to an 11-5 lead heading into halftime.

Similarly to the first half, the second started off tightly contested. The Titans outscored the Golden Eagles 7-6 up until the 10-minute mark. MU proceeded to go on a 7-2 scoring to ultimately seal the victory, 23-12.

Six other Golden Eagles scored. Junior midfielder Caroline Peterson and sophomore attacker Shea Garcia potted four goals each, while sophomore midfielder Lydia Foust added a hat trick of her own. It is the sixth time this season the Redwood City, California, native, has scored three or more goals in a game.

Senior goalie Julianna Horning and sophomore goalie Sophia Leva split time in the cage once again. Horning made one save while giving up five goals. Leva made five saves while giving up seven goals.

For the Titans, redshirt senior midfielder Kaitlyn Wandelt led the way with four goals and one assist. Four other Detroit Mercy players added a goal in the match.

First-year goalie Hannah Shrader made 15 saves while giving up 23 goals on the day.