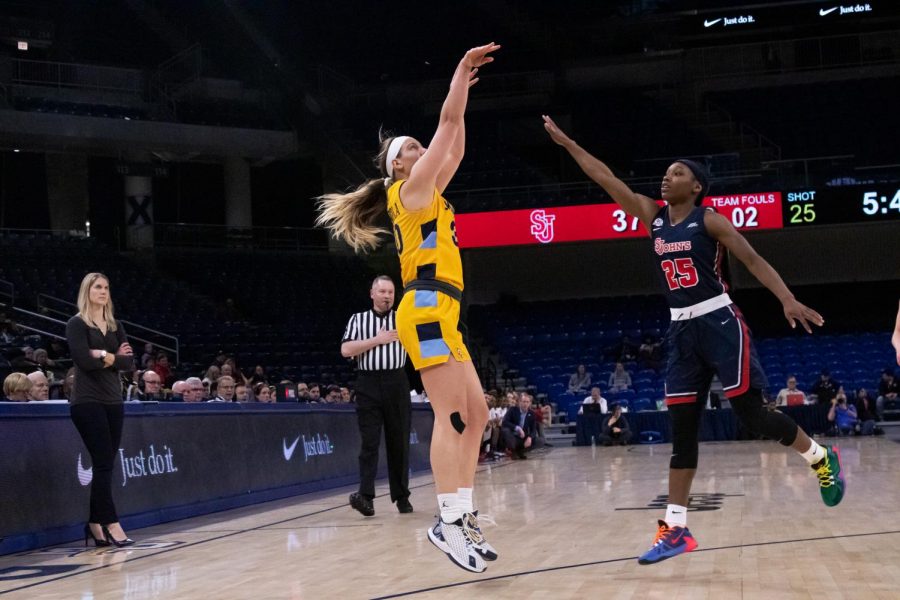 With four players scoring in double figures, the Golden Eagles combined for the program’s best field goal percentage in a conference tournament. Here’s a quick breakdown of the victory:
Game MVP
Senior guard Isabelle Spingola finished the night with 14 points and 11 rebounds for the third double-double of her career.

Spingola not only shot 5-for-10 from the field, but also contributed four assists.

“Izzy’s more the quiet one, but she’s been the silent assassin for us in so many ways,” Marquette head coach Megan Duffy said. “Her shot was falling, but she was showing her versatility a little bit more. She’s always been, for a few years, just a shooter … (but) guarding any of those St. John’s guards are difficult. She keeps this team together.”

It was the complete opposite of Saturday night, when Spingola struggled on the offensive end. Although she scored nine points, she shot 3-for-11 from the field and 2-for-6 from 3-point range.

“(It was) staying in the present and not taking a miss too hard,” Spingola said. “For the rebounds, just play my game and doing what I needed to do in order for the team to win.”

For Spingola and fellow senior Altia Anderson, the two will be playing in their final BIG EAST Tournament game. It is fourth straight year Marquette and DePaul battle for the conference tournament title.

In fact, for the first time in BIG EAST Tournament history, the same two teams — Marquette and DePaul — face off in the league championship game for four straight seasons. The last teams to have this long a stint at the top of the conference were University of Connecticut and Notre Dame for three seasons from 2011-13.
Notes

St. John’s went 0-for-8 to begin the game and didn’t score until the 6:22 mark in the first quarter.
Marquette didn’t miss a shot in the second quarter until a missed jumper at the 3:20 mark.
Both teams shot better in the second quarter with the Golden Eagles shooting 71% and the Red Storm shooting 50%.
In the first half, MU held SJU to 1-for-10 from beyond the arc.
Leilani Correa, an All-BIG EAST Freshman Team honoree, hit a buzzer-beater 3-pointer to end the first half.
MU outscored SJU 21-11 in the third quarter.
The Red Storm struggled at the end of the fourth quarter,
The Golden Eagles held Qadashah Hoppie to 12 points on 4-for-15 shooting and 0-for-7 from beyond the arc.
Marquette scored 52 points in the paint.
This will be the 17th time in 38 years the No. 1 and No. 2 seeds will compete for the BIG EAST Tournament title.

Quote of the Day
When talking about the team’s fourth trip to the BIG EAST Tournament Championship game, both Spingola and Selena Lott didn’t have much to say.

“They’re at a loss for words,” Duffy said. “Never thought those two would be (at) a loss for words.”
Up Next
Marquette (24-7, 13-5 BIG EAST) faces DePaul in the BIG EAST Tournament Championship March 9 at Wintrust Arena. Tipoff is set for 7 p.m. Central Standard Time.

“For us, as a team tomorrow, we just need to come ready to play,” Spingola said.

This article was written by Zoe Comerford. She can be reached at isabel.comerford@marquette.edu or on Twitter @zoe_comerford.