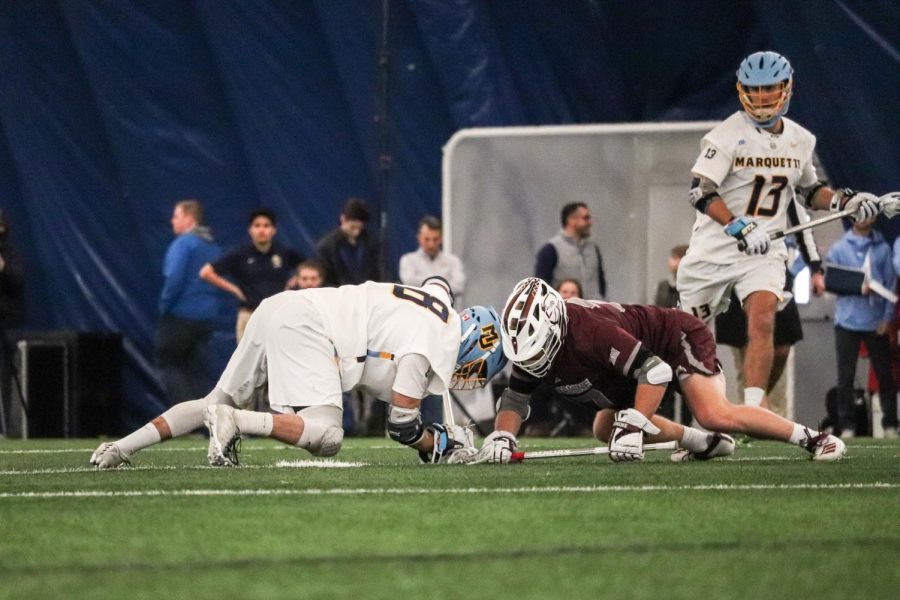 Marquette men’s lacrosse team suffered its second loss in a row on home turf Saturday against Robert Morris University with a final score of 11-10.

“Hats off to Robert Morris and Coach McMinn,” head coach Andrew Stimmel said. “They made a great play at the end of the game to win. We had a chance to win, but they made one more play to win today.”

Robert Morris scored the first goal of the game, but Marquette led 3-2 after the first quarter following three goals from three different players.

In the second quarter, the Colonial defense was able hold Marquette to one goal and potted three of their own. They ended the half with a 5-4 lead over the Golden Eagles.

Marquette scored three unanswered goals to go up 7-6 in the early stages of quarter three.

However, Robert Morris was able to tie things back up less than a minute later.

The score remained tied up until the Colonials found the back of the net with only seven seconds left in the quarter. Robert Morris led 8-7 going into the final frame.

These opening goals began an offensive battle between the two teams for the remainder of the game. It was a back-and-forth battle the rest of the way with Robert Morris edging out the Golden Eagles in the final seconds.

“We have a lot to work on offensively and defensively,” junior goalie Gabe Stein said. “Our downfall is being able to maintain runs and maintain leads. We have a young team and are really trying to give them experience, and that is only going to come with more games.”

Sophomore Holden Patterson and senior Peter Henkhaus led the team with two goals each. Five other Golden Eagles found the back of the net.

Stein totaled 13 saves on the afternoon.

“He played a great game and we are really excited for him, and he has earned that over the past several weeks in practice,” Stimmel said. “The defense was really excited to play in front of him today, and we know he will give us a chance defensively to move forward.”

“Looking forward we need to step back and put things into perspective a little bit. (We) just need to try to get a little better going to face talented teams,” Stimmel said.

Marquette (3-3) travels to Ann Arbor Wednesday to take on the University of Michigan at 3 p.m.

This article was written by Molly Gretzlock. She can be reached at molly.gretzlock@marquette.edu or on Twitter @MGretzlock.