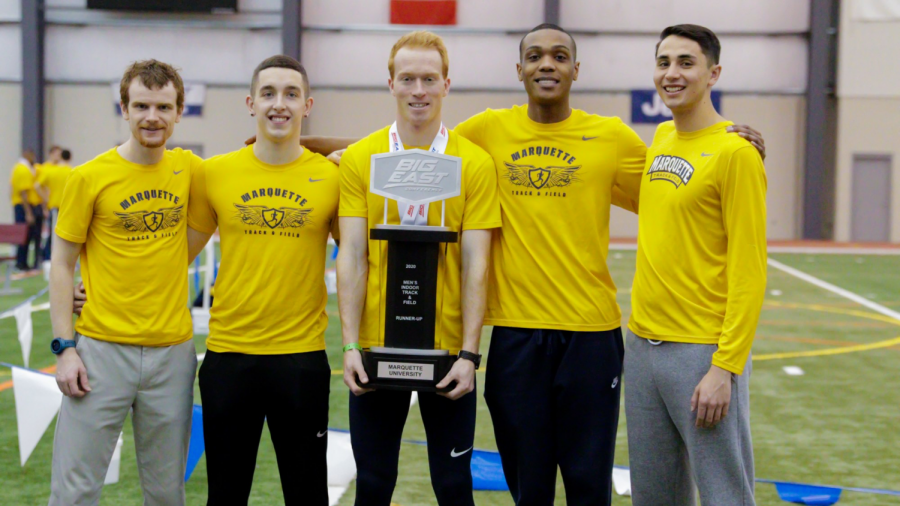 Members of the Marquette men's track and field team pose with the runner up trophy. (Photo courtesy of Marquette Athletics.)

Marquette men’s and women’s track and field teams both placed second at the BIG EAST Indoor Track & Field Championships this past weekend in Geneva, Ohio.

“I’m happy for our kids as they’ve been working really hard to make sure they’re performing at their best for the postseason,” Marquette head coach Bert Rogers said in a press release. “We had some really good performances, hit a ton of top-10 marks and broke a couple school and freshman records.”

The MU men finished the two-day event with a total of 163 points, 23 points behind Villanova’s 186 giving them second place. This is the sixth straight year Marquette has finished as the runner-up in the BIG EAST Championships since the conference’s realignment in 2014.

First-year Zachariah Murry broke the school record in the 400m with a time of 47.98.

The women’s team finished second with a total of 112 points despite entering the final day of competition with a 14-point advantage over Villanova. This is the second runner-up finish in the past three seasons and seventh consecutive top-three conference finish for the women.

Lindsey Mirkes won the high jump event. This was the De Pere, Wisconsin, native’s first individual conference title after finishing second in the event at the outdoor championships.

Those who qualified will head to Alburquerque, New Mexico for the NCAA Indoor Championships from March 13-14.

This article was written by Sam Arco.  He can be reached at samuel.arco@marquette.edu or on Twitter @sam_i_am119.