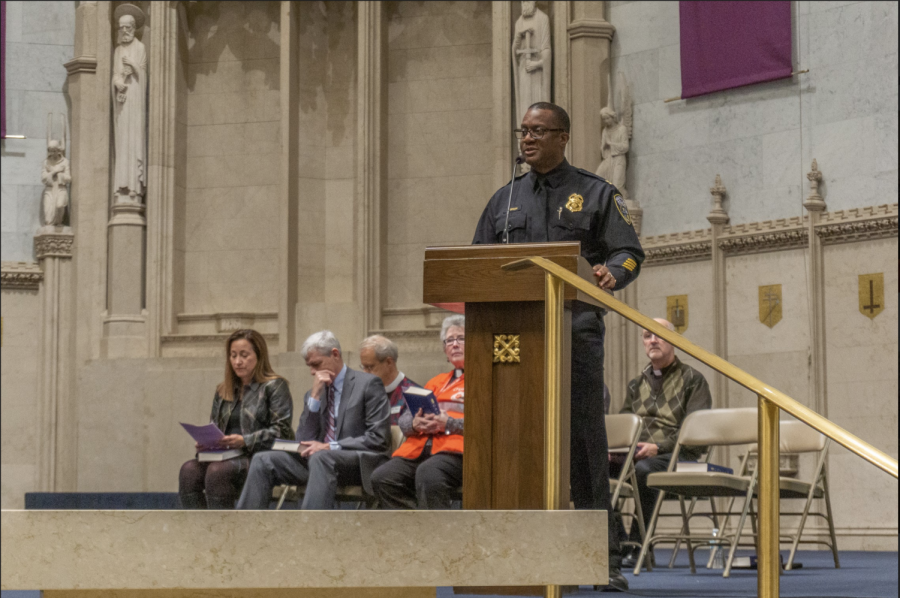 Community members from across Milwaukee’s Near West Side gathered together for a vigil at the Church of the Gesu Monday in honor of the six lives lost during the Molson Coors shooting Feb. 26.

The Near West Side is home to the Molson Coors campus, Marquette University, Harley-Davidson and Potawatomi Hotel & Casino, among others. All of those who spoke at the vigil either live or work in the Near West Side.

“(The Near West Side) is often described as a ‘neighborhood of neighborhoods,’ (and) we are a neighborhood of neighbors,” Rev. Lisa Bates-Froiland of Redeemer Lutheran Church said at the vigil. “So when a tragedy occurs, even one as extreme as last week’s mass shooting in the Miller valley, perhaps the one good thing that emerges is a sheer desire to reconnect, to show up, (and) to recommit to the bonds of community, however fraught they may be.”

Jeffrey Norman, Milwaukee resident and Commander of District Three of the Milwaukee Police Department, said it brings him resolve as a first responder to know that MPD is now known to keep the city safe.

“‘Milwaukee strong.’ In that short message, I understand how we are all connected in this challenge to protect and take care of our city,” Norman said at the vigil.

Cristy Garcia-Thomas, chief external affairs officer at Advocate Aurora Health, said forgiveness can be the first thing to start on the path of healing.

“We may not know how to forgive in the pain of the recent tragedy,” Garcia-Thomas said at the vigil. “Our first responsibility in the aftermath of violence is prevent it from destroying us.”

Lovell also spoke at the vigil.

“Let it go, and put it in God’s hands,” Lovell said. “Together we are ‘Milwaukee strong.'”

Byron Johnson, a Molson Coors employee, described what it was like the day of the shooting. In a fifth floor locker room, Johnson and his fellow employees kept each other calm and contacted family members when the active shooter was announced.

“I will walk the very path where several coworkers were slaughtered last Wednesday. I will keep them in mind with a heavy heart,” Johnson said.

The shooting, which occurred near the 4100 block of W. State Street, was the eleventh mass shooting in Wisconsin since 2004.

The gunman, identified by police as Anthony N. Ferrill, was a 51-year-old Milwaukee man and former employee of Molson Coors. He was found deceased by MPD with a self-inflicted gunshot wound.

All victims of the shooting worked for Molson Coors, Milwaukee Police Chief Alfonso Morales said at a press conference held following the shooting.

The Marquette University Police Department was one of the agencies that responded to the incident, along with MPD and the Milwaukee Country Sheriff’s Department.

“We offer our prayers and support for the family and friends of those affected and for the entire Molson Coors family,” MUPD Chief Edith Hudson said in an email to the Marquette community.

MUPD Assistant Chief Jeff Kranz said the department is still learning and gathering information from their response to the shooting. The staff who responded to the incident are being given time off to “decompress.”

Kranz said the things officers learned when responding to the shooting will be incorporated to new training in the future.

MUPD provided its LIMOs to transport Molson Coors employees to the family reunification site, according to a Feb. 27 university news release.

Out of respect for the victims, the release said the university has postponed Give Marquette Day from Feb. 27 to March 3.

“The Marquette family mourns with our neighbor and fellow Near West Side Partners institution Molson Coors following the devastating shooting at their Milwaukee campus yesterday,” a Feb. 27 university news release said. “We offer our prayers and sympathies for all employees and their families, as well as for our fellow neighbors in the near west side.”