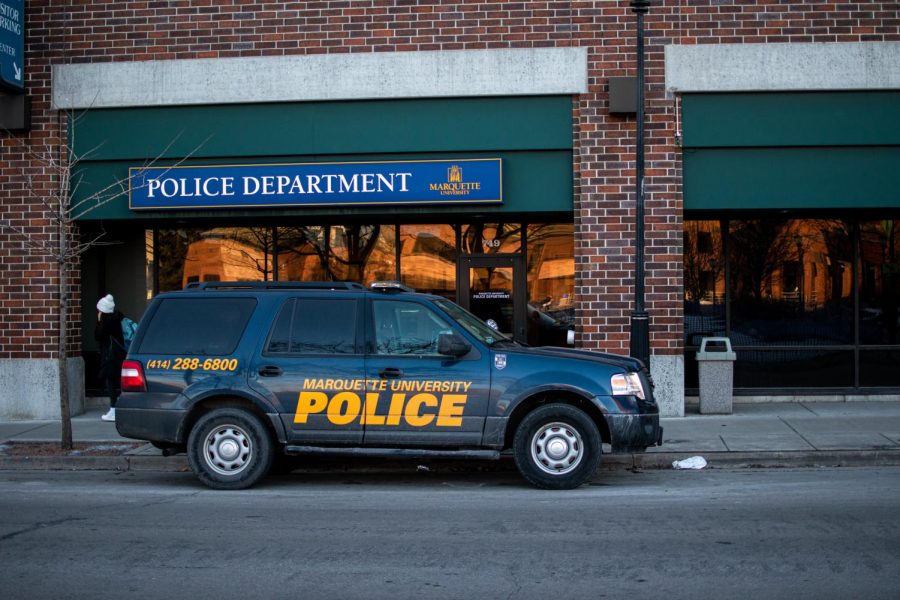 With multiple recent incidents of violence on or near campus, Marquette University’s on-campus resources, such as the Counseling Center and the Marquette University Police Department, have been responding to potential trauma experienced by students.

MUPD Assistant Chief Jeff Kranz said that, especially after a bullet went through a window at The Commons Feb. 17, MUPD officers have tried to make themselves more available to students. He said they have been walking through residence halls more often, being present and trying to be more approachable.

Nonetheless, SafeWise, an independent safety review site, released a report in 2019 based on FBI data that ranked Milwaukee as the sixth most dangerous city in America. St. Louis, Detroit, Baltimore, Memphis and Kansas City were ranked one through five on the list, respectively.

College Factual, a company that provides information to guide students through many aspects of the college application and decision process, reported that Marquette is in the top 1% of crime incidents reported at universities across the United States, with 1,240 safety-related incidents involving students on or near campus in 2018.

Marquette also annually publishes a Security and Fire Safety Report that outlines policies and resources for various crimes and trauma. The report also includes crime statistics about the campus, organized by location and type of attack.

“I know after the incident with the bullet, myself and another officer just sat in the lobby of The Commons and talked with people that were coming in and out and gave them an opportunity to ask questions or express concerns and provided them with whatever information we could at the time,” Kranz said.

He said it is very important for any student with concerns to come to MUPD and ask their questions. He also said students can request training and MUPD is happy to provide it.

“There’s a generic class … just our self-defense class, but you can also reach out to our crime prevention officer and say ‘Hey, this is specifically what we’re concerned about, can you help us address it?’” he said.

Kranz said this is one of the benefits of Marquette having its own police department.

“We’re trying to give a very personalized service to the campus community, on and off campus,” he said. “Students, staff, members of the community — it’s available to everybody.”

Brittney Sockwell, a sophomore in the College of Arts & Sciences, said she wishes she knew more about how to respond to various safety incidents around campus, especially with the frequency of safety alerts.

“I wish we could have more distributed information about what to do in the case of a school shooter,” she said. “If I’m in my room, I know what to do, but what if I’m just around campus?”

Kranz said MUPD officers are trying to be present, get out of their cars and out into campus, walk around and engage in discussions. However, he said people’s negative experiences with or perceptions of police officers can make this a challenge.

“I know people have bad experiences with law enforcement. I totally understand that, and I get the concerns that people have,” he said. “We’re just trying to break down that barrier.”

He said MUPD is trying to police differently and more personally.

“Students can be seen for immediate, walk-in, on-call appointments at any time during the day,” Michael Zebrowski, director of the Counseling Center, said in an email. “Counselors will help the student to process the immediate aftermath of a trauma with a focus on offering skills that help to decrease the acute symptoms of trauma and aiding the student in restoring a sense of safety.”

Zebrowksi also said that, for groups of students affected by trauma, the Counseling Center and other campus offices offer Community Support Meetings.

“These meetings normalize symptoms caused by trauma, allow students a chance to talk about the incident and to learn about resources on campus,” he said in an email.

When a traumatic event affects Marquette’s campus, a brief is issued, Zebrowski said. He said the brief directs students to campus resources, one of which is the Counseling Center.

“Students may reach out for CC services, or they may seek support from many other professionals on campus such as campus ministers, resident hall directors, advisers, faculty and staff,” Zebrowski said in an email. “Services are available for any student in the aftermath of a traumatic event.”

Kranz stressed it is important to rely on one another in times of stress or violence.

“I think that’s the most important thing,” Kranz said. “It’s during difficult, challenging times like this with the events of the last few weeks that we have to pull together and be there for each other.”