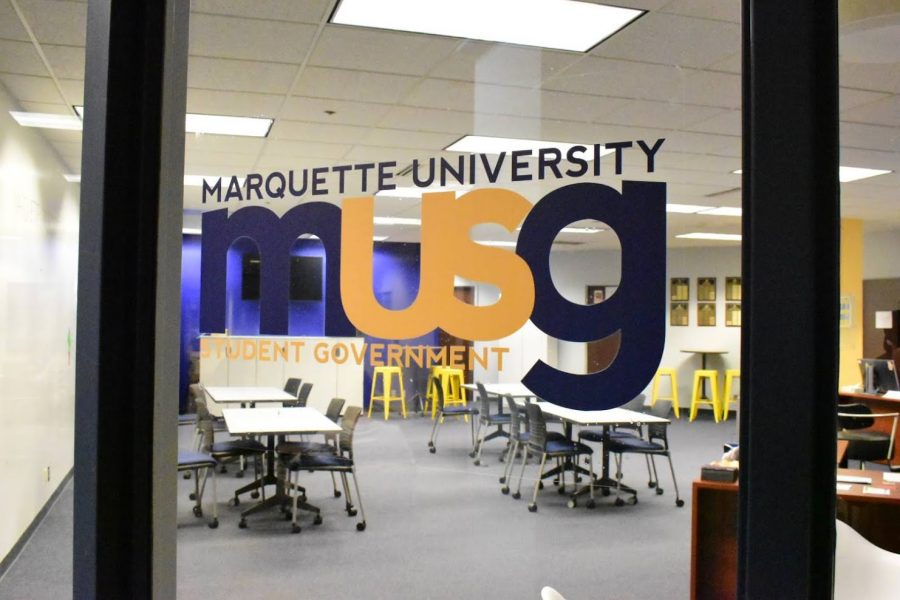 The Marquette University Student Government office is located on the first floor of the Alumni Memorial Union at 1442 W. Wisconsin Ave., Milwaukee, WI 53233.

In attempts to contact Marquette University Student Government for in-depth information on initiative progress, Marquette Wire reporters face barriers that prevent them from informing the campus electorate about its top student officials.

The lack of transparency and responsiveness from elected MUSG members hinders the ability of students to hold them accountable for making meaningful change. MUSG officials must improve their openness with the campus community about progress on key issues.

Without open access to information about the activity of elected officials, the students who voted them into office are left in the dark about the very issues that prompted them to participate in the election process.

Reporters aren’t given the access needed to shed light on these issues. Unresponsive or vague answers to Marquette Wire reporters’ questions prevents student journalists from being able to serve as an independent check on those in power, putting the entire community at risk.

MUSG officials have fundamentally different objectives than journalists. They wish to present information favorably and with opinion. Alternatively, news reporters must present facts objectively, accurately and with context. Readers, listeners and viewers formulate opinions on their own.

While MUSG officials and the Marquette Wire reporters do not have a shared purpose in the community, it is essential that MUSG recognizes the key role of journalists in a democratic environment. Journalists serve a critical function as informers of society and investigators of potential wrongdoing. Impactful reporting can spark positive change. With MUSG’s limited responses or rejection of meaningful interviews, reporters are unable to fulfill their obligation to the Marquette campus.

Due to the lack of information from MUSG, the Marquette Wire was unable to provide adequate updates on important issues like campus accessibility, financial plans, sustainability efforts and more.

Manjee and Brophy did not respond in another story about MUSG’s mental health initiative and its plans to expand its suicide prevention training.

In another instance, MUSG members provided limited responses when asked for information about a new consensual relationship policy between students and staff. Committee co-chairs Sara Weber, a senior in the College of Arts & Sciences, and Alex Burbach, a senior in the College of Health Sciences, told the Marquette Wire that MUSG’s Title IX committee will be drafting a recommendation for the policy this semester.

However, reporters were not given extensive information on exactly how this would be accomplished and why the initiative is only now coming to fruition. It is unclear whether MUSG officials lacked knowledge about the initiative or attempted to withhold information.

There is no way to know whether successes or problems exist when information is not willingly provided. MUSG should equip students with honest updates about its work.

Another major barrier to interactivity between MUSG members and the public is recent changes to MUSG’s meeting structure. The structure change means that four legislative meetings a month — which are open to the public — have been reduced to one legislative meeting a month. The legislative meeting no longer happens weekly. Instead, MUSG holds social gatherings, standing committee and initiative workshop meetings. These meetings tend to involve internal MUSG staff and decrease participation from the broader community.

This decrease in legislative meetings leads to less understanding of MUSG’s weekly accomplishments, responsibilities or shortcomings. It prevents students from knowing whether meaningful progress is being made on certain initiatives. It gives MUSG officials the opportunity to put off important tasks, whether they actually do or not.

On top of this, MUSG has not posted legislation or summary information from meetings on its website in the past two years, preventing students from easily accessing information about MUSG initiatives.

As campus leaders, MUSG members have the ability to set the tone for the organization’s communication with the larger community. MUSG has a responsibility to represent students and it must ensure its organizational structure and personal vision is compatible with transparency.

Without an informed electorate or answerable officials, the campus environment suffers.

A previous version of this story stated that Sara Manjee and Dan Brophy declined to comment in a recent story about mental health. In fact, they did not respond. The Wire regrets this error.