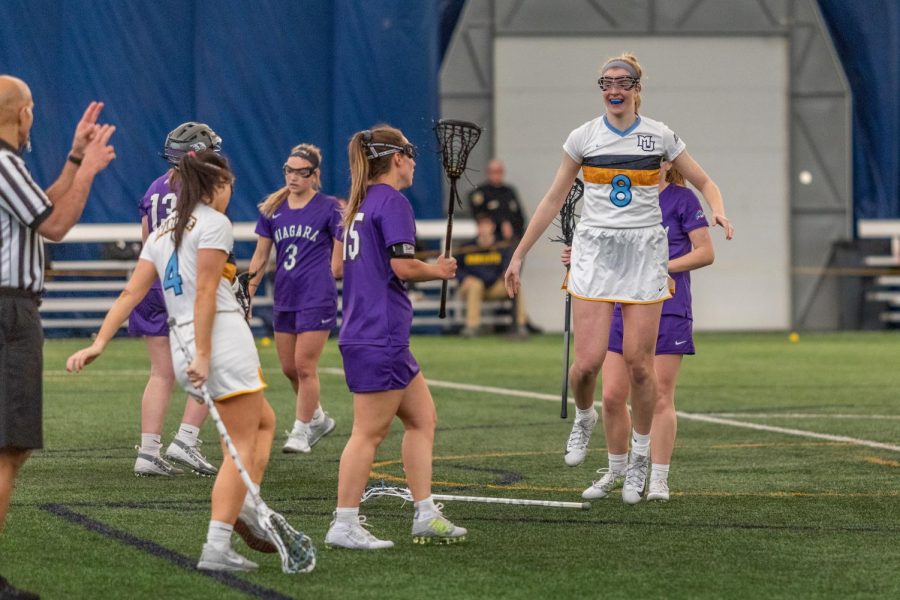 If you ask Marquette women’s lacrosse head coach Meredith Black what she thinks of first-year attacker Hannah Greving, she’ll tell you she’s not the “typical freshman.”

“She doesn’t play like a freshman,” Black said. “She’s very calm on the field, and she doesn’t make those typical freshman mistakes. She has a great mindset.”

Greving comes from a lacrosse family.

“My brother had played ever since he was young,” Greving said. “My dad was his coach, and my mom asked me if I wanted to start playing around third grade.”

The Western Springs, Illinois, native said she played basketball, soccer and volleyball in addition to lacrosse.

“It’s different than other sports,” Greving said. “I chose to stick with lacrosse because I liked how it was really quick and fast-moving.”

There was never a doubt in Greving’s mind that Marquette was the school she wanted to attend.

“I always wanted to come here,” Greving said. “One of the girls on my high school team ended up coming here, so I visited her one day. That’s when I first got introduced to the school, and I loved the urban atmosphere and that it’s close to home. It had all the factors I was looking for in a school.”

The adjustment period from high school to the Division I level has posed a challenge for Greving.

“I came in as a (midfielder) but transitioned into more of an attacking role because the speed of the game was too quick for me on defense,” Greving said. “The Division I level is much more quick. People have a much higher IQ. The (players) know where the play is going to come next.”

One of Greving’s biggest influences has been senior attacker and captain Megan Menzuber.

“(Menzuber) is such a good player,” Greving said. “She always works hard and has been a good mentor for me. She’s been someone I look up to and has really helped me a lot throughout my first year.”

Throughout the first seven games of her career, Greving has notched nine goals, one assist and 10 points. She leads all first-year players on the team in scoring.

Black said she’s been most impressed with Greving’s shooting.

“She can finish in a lot of different situations,” Black said. “She’s a great player and has a lot of potential.”

Black highlighted Greving’s 6-foot frame as one of her biggest strengths.

“She’s very focused, and she’s a strong player,” Black said. “We’ve been working with her on her transition on the ride, her defense and trying to force turnovers. We’ve also been trying to work with her a little more on the draw. When you have someone that tall, you want to take advantage of that.”

Black said Greving’s composure surprised her the most thus far.

“As a freshman, you don’t really get a lot of opportunities to be a vocal leader,” Black said. “She’s been great at fulfilling her role on the team and getting everyone in her class on the same page.”

While Black has been pleased with Greving’s early success, she said she expects her to continue to develop as a player throughout the season.

“She’s been key in every game,” Black said. “She’s made an impact one way or another.”

Black said it’s inevitable for a first-year player to go through growing pains.

“When you have freshmen that are successful, you don’t want to rely too much on them because they’re freshmen,” Black said.