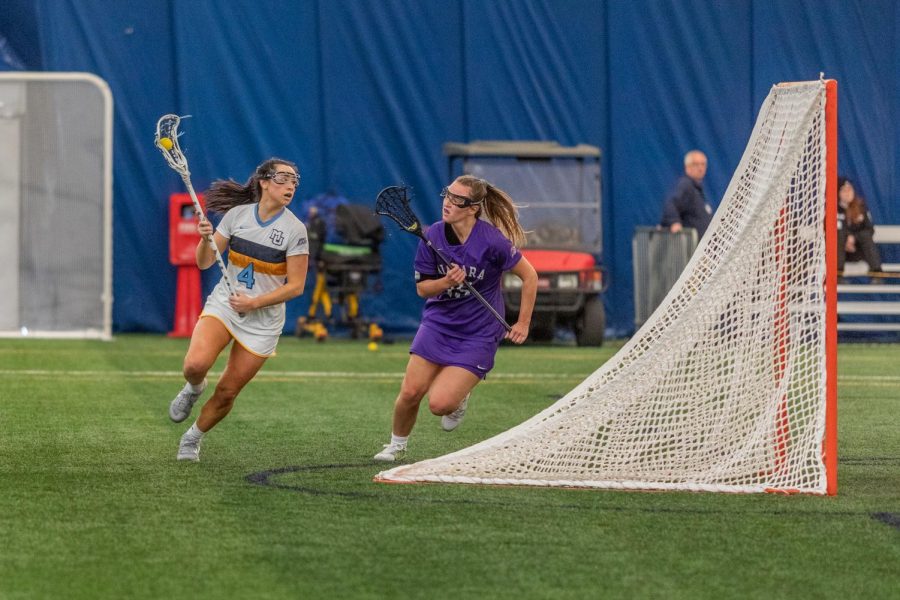 Carolien Steller (4) heads around the net to attempt a pass in Marquette's 16-6 win over Niagara on Feb.23.

The teams traded goals for the first eight minutes of the first half. Down 4-3 at the 23:57 mark of the half, first-year midfielder Hannah Greving found the back of the net to tie the game at 4-4. Greving’s goal was the boost Marquette needed as the Golden Eagles would finish the half on a 9-0 run putting themselves up 12-7 at halftime.

Building off its first-half success, Marquette opened the second half hot, scoring four goals in the first four minutes of the half to extend its lead to 16-7. With under 16 minutes left in the half, Jami Pollack got one past Marquette junior goalie Sophia Leva giving FSU some life. The Bulldogs would go on to score five straight goals to cut the MU lead to three.

Despite giving up three straight goals in the final 4:11 of the half, Marquette was able to hold its ground, leading to an 18-17 victory.

Sydney Skalstad led the way for the Bulldogs on the afternoon scoring four goals, tallying up two assists and six draw controls wins. Marina Mayo added four goals and an assist on the day as well.

Marquette (4-3) will return to Valley Fields for a two-game homestand that begins Wednesday at noon against Central Michigan.