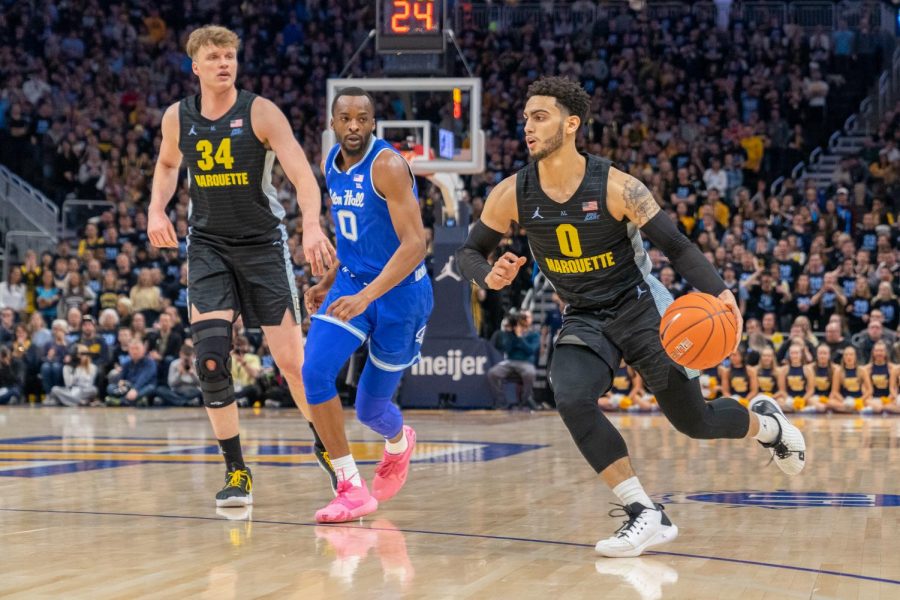 Markus Howard (0) dribbles the ball past a Seton Hall defender in Marquette's 88-79 loss against the Pirates.

Despite a late push in the final minutes, the Marquette men’s basketball team fell just short 88-79 to the No. 13 Seton Hall Pirates in its final home game of the season.

Before the game, Markus Howard, Sacar Anim and Jayce Johnson were honored for senior day. Here’s a quick breakdown of Marquette’s loss:
Game MVP
In his last game at Fiserv Forum, Howard put up 37 points on 12-for-20 shooting, six of which came from beyond the arc. With his performance, Howard has now moved up into the NCAA Division I Top 25 all-time scoring list with 2,700 points, passing Xavier’s Byron Larkin’s 2,696.

“There was a lot of emotion,” Howard said. “I tried my best to put all the emotion I felt into the game.”

Additionally, Saturday marks the 30th time Howard has totaled 30 or more points in a game.

Howard reflected on spending his last home game with the other seniors.

“I can still be content with knowing that I was able to share my last moments in Milwaukee with (Sacar Anim and Jayce Johnson),” Howard said. “I’m fortunate and blessed.”
Key Stats

Seton Hall shot 60 percent, going 18-for-30, from the floor in the first half. The Pirates finished the game shooting 50 percent from deep.
Marquette trailed by as many as 24 points in the second half but cut the deficit to five with 0:34 seconds remaining.
SHU’s Sandro Mamukelashvili put up a career-high 26 points on 10-for-13 shooting.
The Pirates finished the game with six total dunks.
Myles Powell posted 28 points for the Pirates, his sixth-highest total this season
Theo John reached double figures for the third time this season and the seventh time in his career.
Anim notched 13 points despite shooting just 5-for-15 from the field.
MU is now 8-8 in BIG EAST play.

Quote of the Day
Wojciechowski had nothing but positive things to say about Howard and the impact he’s left on and off the court the last four years.

“Markus has been as good a kid and as good a player any coach could have hoped for,” Wojciechowski said. “He’s been a world-class kid, and he’s been an incredible ambassador not only for our program but our entire university. Markus took a chance on us before there was a road map.”
Next Up
Marquette (18-9, 8-8 BIG EAST) heads back on the road to take on DePaul at Wintrust Arena Tuesday. Tipoff is slated for 7 p.m.

“This isn’t the end,” Howard said. “We still have a lot more basketball to play.”