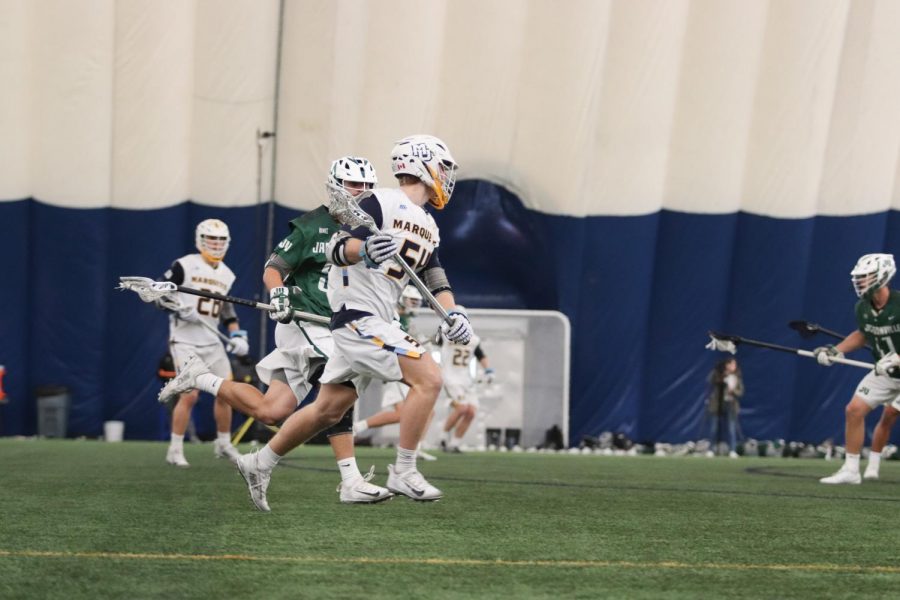 Chris Kirschner (54) heads to the net in Marquette's 11-9 loss to Jacksonville.

Marquette men’s lacrosse received its first road loss of the season Saturday, losing to the Drexel Dragons 13-11 in Philadelphia.

The game proved to be a battle of the offensive units, with Marquette being paced by its first-years.

The Golden Eagles came out with a promising start in the first quarter, only letting Drexel score three goals. Sophomore Thomas Washington was able to win five out of six faceoffs at the X early on to help Marquette’s offense tally five goals.

The second quarter was not as successful for the Golden Eagles. MU was unable to add a single goal to the scoreboard, and Drexel scored four goals to go into halftime leading 7-5.

The third quarter was hectic, as Marquette got out to a hot start thanks to goals from Kirschner and sophomore attacker Holden Patterson.

Drexel tied it again, but Stegman and first-year attack Devon Cowan found the net to give Marquette their first lead of the half. Drexel scored the equalizer to send the game into a 9-9 tie heading into the final quarter.

The fourth quarter began similar to the third, as Washington caused a turnover and scored the first goal of the final period. The Dragons then scored two consecutive goals and took the lead again.

Kirschner scored the last goal of the day for Marquette late in the quarter and secured his hat trick, but it was not enough. Drexel added two more tallies before the game’s end and walked away with a 13-11 victory on their home turf.

Kirschner led the team with three goals and an assist, while Stegman had two goals and four assists. Cowan and Patterson, along with senior Luke Anderson and first-year midfielder Max Kruszeski, each added a goal.

Washington, scored twice on the day, a career-high, and scooped up 12 ground balls while going 17-for-26 on faceoffs. Junior goalie John Hulsman racked up ten saves for the day.

For Drexel, Ryan Genord scored a game-high five goals while Collin Mailman added a hat trick and Reid Bowering scored two. Jimmeh Koita went just 9-for-25 at the X and picked up the team-high for ground balls on the day with seven. Between the pipes, netminder Ross Blumenthal had six saves.

Marquette (3-2) will return back home next weekend to take on Robert Morris University Saturday at 11 a.m.

This article was written by Molly Gretzlock. She can be reached at molly.gretzlock@marquette.edu or on Twitter @MGretzlock.