Howard’s 37 points not enough to lift MU past No. 13 Seton Hall 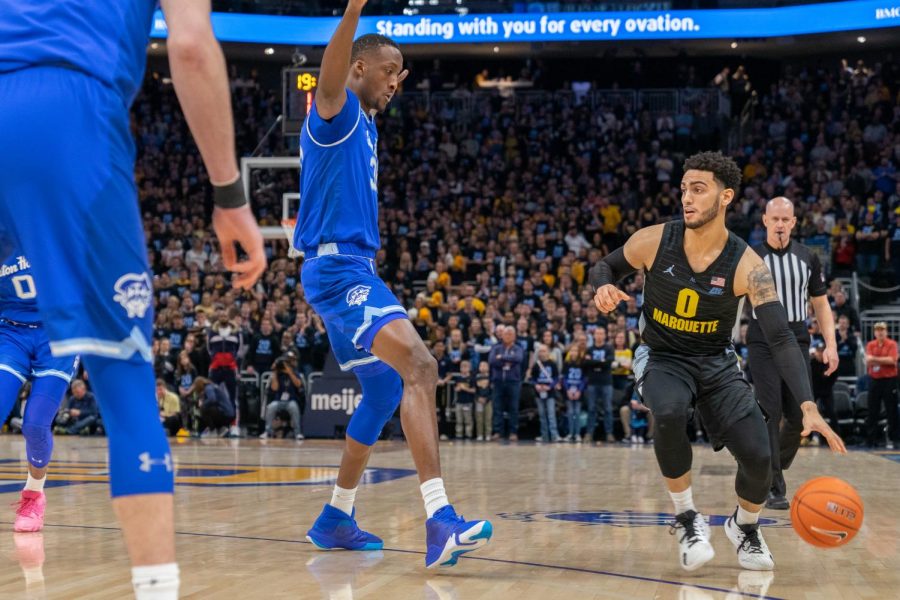 After ending its three-game losing streak against Georgetown Wednesday, Marquette stayed home to host the then-No. 13 Seton Hall Pirates. The pre-game Senior Day ceremonies and the sold-out crowd set an optimistic mood at Fiserv Forum, but the Golden Eagles were defeated, 88-79.

Two consecutive wins over St. John’s Feb. 23 and Marquette Feb. 29 bumped the pirates to a No. 8 ranking in Monday’s Associated Press Top 25 Poll.

The matchup between star guards Markus Howard and Seton Hall’s Myles Powell started off strong, with both players leading the way for their teams early on. Howard had 17 at the break compared to Powell’s 15.

The crowd played a factor early on as well. Almost every time Powell touched the ball, he was met with boos. On the opposite end, Howard got the crowd on their feet, hitting shots from deep. He made each of his first six 3-point attempts.

Howard also scored the first 12 points of the game for the Golden Eagles while the rest of the team was a combined 0-for-7 from the field.

“I was just trying to be aggressive,” Howard said. “I knew the hype of the game was going to be right from the start, so I wanted to make sure I was attacking it, and I was fortunate enough to be feeling it from the start.”

Seton Hall shot 60% from the field in the first half, shooting 7-for-12 from beyond the arc. However, the Pirates went into halftime with just a 44-35 lead, giving MU an opportunity to come back.

The second half didn’t go as planned for Marquette as the Pirates’ Romano Gill started the half with two energetic dunks.

Seton Hall continued to roll offensively throughout the half, and Marquette trailed consistently by double digits. It wasn’t until they went on a 10-0 run to bring the deficit to eight with less than a minute to go.

“Our guys don’t quit till the end,” Marquette head coach Steve Wojciechowski said. “We were proud of that — we were proud that we had a chance.”

The crowd got back into it when Sacar Anim threw down a put-back dunk. Then, after a timeout, he hit a shot from beyond the arc to bring MU within just five.

However, Howard missed a 3-pointer and then turned it over the next possession, sealing the win for the Pirates.

SHU was led by Powell and a career performance from Sandro Mamukelashvili, who did not play in the first matchup between these teams due to injury. The 6-foot-11 forward proved to be a problem for Marquette, scoring 26 points on 10-for-13 shooting from the field.

“Having him back and seeing him round into form is giving us an added dimension,” Seton Hall’s head coach Kevin Willard said. “He’s a dynamic player, he spreads the floor, he takes a lot of pressure off Myles. He does a lot of good things.”

Wojciechowski said he thought Mamukelashvili “played like an NBA player” and that there isn’t much you can do to stop Seton Hall when its plays that well.

“He scored at the basket, he scored on offensive rebounds and he hit threes,” Wojciechowski said. “He was playing in an NBA arena, and unfortunately, he was playing against a college team. He played like a pro.”

Powell also delivered in the marquee matchup against Howard. While he didn’t match Howard in terms of points, he came away with the win and hit some well-contested shots to do so.

“Most of Powell’s threes were made over outstretched arms,” Wojciechowski said. “He’s capable of making those shots. That’s why he’s in the running for National Player of the Year.”

On the defensive end for Seton Hall, Willard said they knew Howard was going to get his buckets, so they wanted to focus on the other guys, and they did so successfully.

“When Markus or Myles are playing the way they’re playing tonight, there’s not much you can do,” Willard said. “Our gameplan has always been to make sure that Sacar (Anim), (Brendan) Bailey or others don’t hurt us, and today I just kept telling them to keep doing what you’re doing.”

The loss today was the final home game for Howard, Anim and Jayce Johnson, and while they went out on a low note, Howard reassured that there is more in store for this team and for his career.

“It’s an end of an era here in Milwaukee, but there’s still a lot more basketball to be played,” Howard said. “There’s a lot more to improve and a lot more to do with our season. This isn’t the end.”