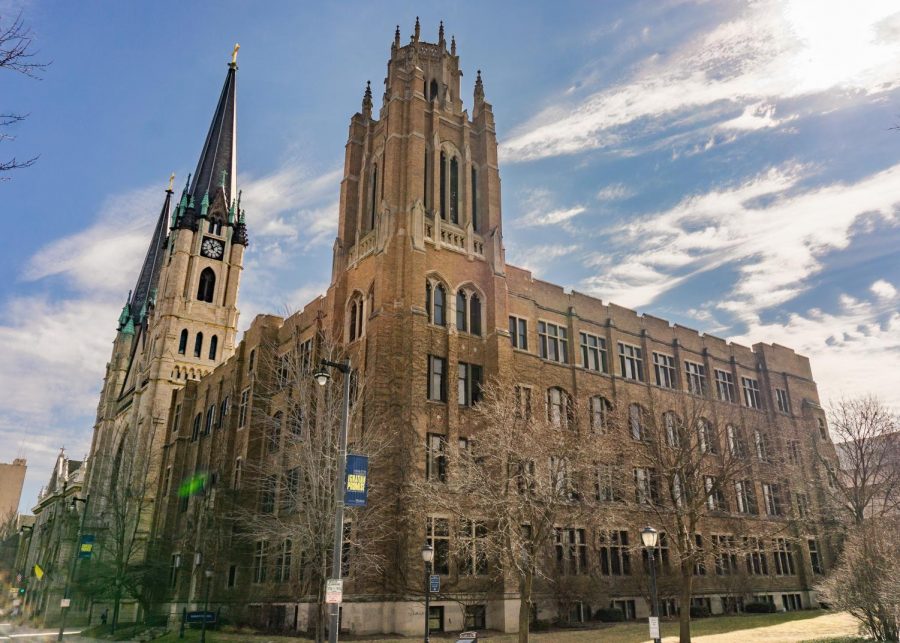 Employees unable to complete their core tasks at home will be placed on temporary unpaid furlough.

Do you ever walk past Marquette Hall to the tune of bells and wonder what that noise is? It’s Marquette’s very own carillon, an instrument typically held in a bell tower that Zach Bigelbach would describe as a blend between a xylophone, a piano and an organ.

The bells played at Marquette are typically pre-recorded sounds of the carillon. However, there is a group on campus for students interested in playing their own tunes on the instrument.

Bigelbach, a junior in the College of Business Administration and a member of the newly established Carillon Guild, recently learned to play the carillon. He said playing is not all that easy. The Carillon Guild is a student organization that gets together to learn about the history of the carillon and to learn how to play it. Bigelbach said the word “guild” is in reference to the national organization that exists. The Guild of Carillonneurs in North America is an organization of professional musicians who practice and support the carillon art.

Bigelbach said the instrument has wooden paddles which his hands hit and bounce off of the paddles. This creates the melody while he uses his feet to play low notes.

Bigelbach, who is rehearsed and classically trained in piano, first learned about the carillon through Mark Konewko, the university chorus director and the guild’s faculty adviser.

“When I auditioned to be the chorus accompanist … I inquired a little bit because I’d never seen or played this instrument,” Bigelbach said. “(But) from the first moment (the director) played something, I was totally in.”

Bigelbach wasn’t the only student intrigued with the instrument.

Holden Patterson, a sophomore in the College of Business Administration and the president of the Carillon Guild, said he took a class his first year called the Carillon Discovery, taught by Konewko.

Because most of the class was upperclassmen, Konewko asked Patterson to start the club.

Though not well rehearsed in musical instruments, Patterson found great interest in the carillon and wanted to spread his appreciation for the instrument to campus.

Forming the organization was a long process, starting the spring of Patterson’s first year at Marquette, when he drafted up a constitution. Patterson said his past fall semester was spent gauging interest, specifically at fall O-Fest in which they had about 300 people put down their contact information. The guild held its first meeting Feb. 18.

James Amorosana, a sophomore in the College of Communication, decided to join the club after hearing about it from Patterson and taking the Carillon Discovery course.

“(Konewko) was helpful with teaching everyone knowledge about the carillon, so when Holden brought up the idea of starting the club, I thought it was something new to get into on campus,” Amorosana said.

Amorosana dabbled in piano and drums throughout his life and thought the club would be a good way to get out of his shell and bond over shared interests.

“I thought it would be a cool idea to meet new people who have similar musical interests like me,” Amorosana said.

Patterson added that he hopes the club can teach people about the instrument and how it ties the Marquette community together, as well as give people the opportunity to experience it and possibly learn to play it themselves.

Patterson added that he hopes in the growth of the club, the group can expand from meetings to holding events, such as a possible field trip to see the University of Wisconsin-Madison’s carillon.