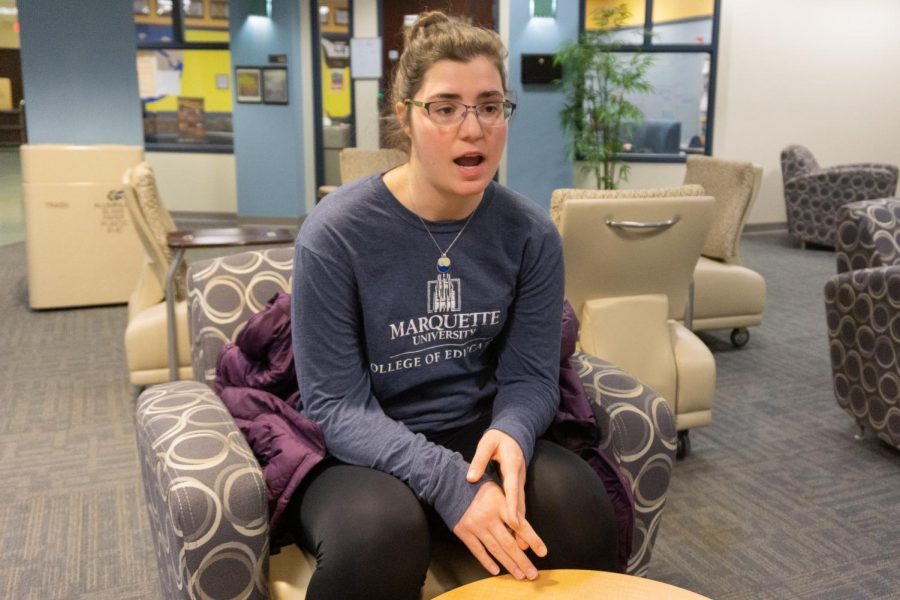 Brooke McArdle commutes three hours twice a week to take classes at the University of Madison.

Brooke McArdle, a junior in the College of Education, is studying classical languages at Marquette but said she quickly outpaced the offerings for the major. With Marquette lacking the classes she needs to continue her studies in graduate school, McArdle has begun taking upper level classes at the University of Wisconsin-Madison.

“Had I known this was the career I wanted, I would’ve transferred,” McArdle said.

She said since she only figured out she wanted to go to graduate school at the end of her sophomore year, it felt like it was too late to change schools.

McArdle currently commutes twice a week to the University of Wisconsin-Madison to take upper level classical language classes. Classical languages include Greek and Latin. She said her day begins at 6 a.m. and ends at 8 p.m. on those days, taking a three-hour bus ride to get to Madison and back.

Marquette offers nine different languages in which to take classes: American Sign Language, Arabic, Chinese, Classical Greek, French, German, Italian, Latin and Spanish, according to a brochure created by the Department of Languages, Literatures and Cultures.

As of fall 2019, seven students are currently enrolled in the classics major, according to data from the Office of Institutional Research and Analysis. Ten are enrolled in French as a major. Nine are in German, 34 are in Spanish for the Professions, 40 are in Spanish Language and Literature and five are in Latin American Studies. In total, 105 people are enrolled in a major within the Department of Language, Literatures and Cultures.

Of the languages offered, Eugenia Afinoguénova, chair of the Department of Languages, Literatures and Cultures, said some have fewer faculty. She said this is due to whether there is a demand for a language from students.

Afinoguénova said not having enough faculty is also an obstacle to offering enough courses to create the demand.

Afinoguénova said the reasoning behind Marquette’s language offerings is primarily due to tradition and market demand. For example, the program previously offered Russian and Japanese. Russian stopped being offered primarily due to the lack of a professor to teach it, and Japanese ended due to diminishing interest, she said. It is unclear who made these decisions.

Russian was discontinued when the sole professor died in the 1990s, Afinoguénova said. The language courses were taken away with no attempt to reinstate it, she said. Japanese, which was dropped because of perceived lack of interest was a very quick decision which did not allow tracking how much interest there was over time, she said.

Students studying for Bachelor of Arts degrees in the College of Arts & Sciences are required to take a second language and demonstrate proficiency to an intermediate level, according to the university’s website.

Eric Rorholm, a junior in the College of Arts & Sciences, will be taking a theatre arts class meant for first-year students during his senior year due to conflicts with his Arabic classes, he said.

Alexander Lux, a first-year graduate student in the law school, studied four languages during his undergraduate career at Marquette: French, German, Spanish and Italian. He created his own major known as European Studies with a focus on language, literature and culture.

Lux said he created a proposal and designed the program. He then finished the major in two years.

He also said he felt concerned that the university lacked professors who could teach languages with different intersections. For example, Lux said the university should have professors who teach classes that focus on the intersection of Spanish or other languages and business, or German and medicine. He specified German and medicine due to the amount of medical journals written in German.

He said that having a strong language program at Marquette would draw prospective students due to the unique opportunities.

“We want students who are engaged with the global community,” Lux said. “Learning a language … will substantially improve your understanding your marketability, post-college opportunities, expand opportunities to travel (and) publish your own material.”

Sable Balmes, a first-year in the College of Arts & Sciences, is minoring in French. She said the class selection is limited, both in terms of time slots and topics.

On the spring 2020 bulletin, there are five French classes offered.

“There are enough (classes), in theory, for me to get a minor in French, but my concern is with how few of them there are,” Balmes said. “I don’t know how often certain ones will rotate through into the semesters, which means I don’t know how far along I would get on my minor at any given time.”

Afinoguénova stressed the importance of taking a language.

“By taking the language, you open to yourself a door that leads to a place where you might want to go or you might not want to go,” Afinoguénova said. “It’s more important to learn a language, in my view, than to learn the fundamental of a science that might change by the time you graduate from the university.”

Studying a language is investing in yourself, Afinoguénova said. She added that there is a perception that languages can be taught on someone’s own time, but it is necessary to have support from classmates and a professor to continue people learning languages to keep working.

She also said college is the perfect time to learn a language as minds are still developing.