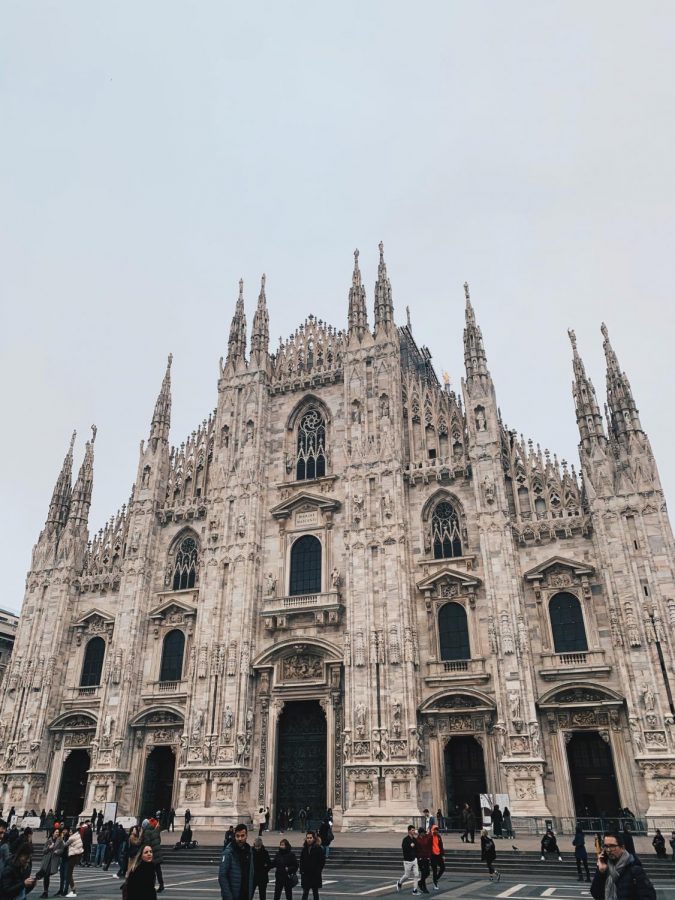 The Duomo di Milano is located in Milan, Italy, one of the worst regions affected by the coronavirus. Photo courtesy of Emma Tomsich

Eleven Marquette students studying at Gonzaga University in Florence, Italy, were told last Wednesday that their program was suspended for the rest of the semester due to coronavirus concerns.

“Our first priority is the safety and security of our students, and over the past 48 hours we have become increasingly concerned that by continuing our program in Florence, we will not be able to assure an appropriate degree of safety or access to services,” an email from Gonzaga University said.

Coronavirus is a respiratory disease first detected in Wuhan City, China, according to the Center for Disease Control. The CDC said it has been detected in 37 locations globally, including in the United States. The International Health Regulations Emergency Committee of the World Health Organization declared the outbreak a public health emergency Jan. 30.

The email said Gonzaga was concerned that by remaining in Florence, students would be at risk of quarantine, travel limitations and limited access to basic services.

“We understand that this decision is a difficult one and presents an unexpected set of challenges to manage,” the email said. “Therefore, we are reaching out to both students and parents, with the request that in this extraordinary circumstance we work together to make everyone’s safety our highest concern.”

The email said students should immediately return to the U.S.

Communication regarding the plan for continuation of current academic courses will be posted March 6, according to the email.

Students were on spring break at the time of the cancelation.

The email also said access to Gonzaga housing will be closed for the remainder of the spring semester effective March 6. Some students decided to return home without returning to Florence. They were able to request that Gonzaga packs belongings for later shipment to home residences, with an anticipated arrival by late summer.

Students are unable to return to Marquette residence halls because the university does not have accommodations, as it planned for the students to be away from campus this semester, according to an email sent to MU students returning from Florence.

Nick Collins, a sophomore in the College of Engineering who was studying in Florence, said he was in Berlin until Sunday. He said he hadn’t been able to enjoy his traveling as much knowing he won’t be able to return to Florence for the rest of the semester. He returned to Florence and gathered his things then.

Collins said he was very shocked when he found out he was returning to the U.S.

“I cried for a little while because I was just super disappointed,” Collins said.

Collins said he hoped to return to Marquette so he could still be involved in his campus organizations as well as work at his job. Since Collins is a sophomore, he will not be able to return to his residence hall.

He said if unable to return, he will go to his hometown until the summer. He said his family has been providing him a lot of support.

“As you know, the U.S. Department of State and CDC have raised their alert levels to 3 for Italy, to avoid nonessential travel,” an email to Milan students from Karli Webster, associate director of education abroad in the Office of International Education, said. “We have been monitoring the situation in Italy over the past week and consulting various sources, including the U.S. Department of State and CDC, as well as our partners abroad. Due to recent changes in the virus outbreak in Italy, Marquette University is strongly recommending that you return to the United States.”

Marquette said it will refund any flight change fees for a similar class of flight.
“At this time, student safety comes first,” the email said. “Regarding other questions related to coursework, refunds, housing, etc., this is presently being discussed with partners and we will provide updates via email in the coming week as information becomes available based upon your program.”
Flights to and from Milan from Delta and American Airlines were suspended March 1.
“Since it will likely be difficult for you to find return airfare out of Milan, consider taking a train to another nearby city, and depart for the U.S. from there,” an email sent to students studying in Milan said.
Marquette will reimburse students up to $2,000 for travel arrangements, the email said.

Marquette University did not recommend that students at Università Cattolicà del Sacro Cuore return home Feb. 25, according to a previous email sent to students studying abroad from the Office of International Education. The email said if individual students chose to return home, some fees may be nonrefundable.

Gillian Gangluff, a junior in the College of Business Administration who was attending school in Milan, said when she got the initial email she didn’t think it was that big of a deal. Then, as she and her friends did more research, the panic settled in.

She said her and her friends went to the grocery store Monday, and people there had carts packed with food to stockpile it. She said everybody was going “a little crazy.” She said other than the grocery store, she first left her apartment Wednesday to go to Starbucks.

“There was definitely a part of us that was hesitant to (go to Starbucks),” Gangluff said. “There is kind of a lot of panic in us because we feel like we kind of are left in the dark about where coronavirus is going and what our school is going to do and how long we’re even going to be here.”

Jena Spahic, a sophomore in the College of Communication, said when she found out Gonzaga University was suspended, she expected Università Cattolica to be next. She said she was scared to leave her apartment.

Spahic lived with two roommates in an AirBnB in Milan. Spahic said they did so because they had heard that the university housing at Università Cattolica was not great.

Spahic said their AirBnB is pretty small, about the size of a studio apartment. She also said it has spotty Wi-Fi. Since she decided she did not want to leave, she was staying in the small apartment during all hours.

“I (felt) stuck,” Spahic said. She said since her Wi-Fi is poor, it was difficult to watch movies or do anything. She took up cooking and baking due to the lack of ability to do anything else, she said.

Kyra Lindeman, one of Spahic’s roommates and a sophomore in the College of Communication, has also had difficulties. She said she bought a separate SIM card for Italy and then ran out of data. Since the Wi-Fi is poor in their apartment, she is unable to communicate frequently. She said she doesn’t want to buy a new one because she doesn’t know if she is staying in Italy.

Spahic said it has put a damper on her entire study abroad experience.

Sogang University’s program in Seoul, South Korea, has been canceled, according to the university’s website.

Matthew Trecek, a sophomore in the College of Arts & Sciences, was studying at The Beijing Center in China this semester. His program was canceled Jan. 28. He has since returned to Marquette.

Trecek is only taking 12 credits, and he said it was because he missed the add/drop date for classes. He said he had to get forced into classes with permission from the professor.

Trecek said he plans to study abroad in China during the fall 2020 semester.

He said when he found out he would return home, his heart sank. Going to China and becoming fluent in Chinese before he graduates are important to him, Trecek said.

“It was a huge, huge hassle, and there were a lot of friends that I probably won’t get to see again, just because of the nature of being from all different parts of the country,” Trecek said.

There are no confirmed or suspected cases of coronavirus at Marquette or in Milwaukee. There is one confirmed case in the state of Wisconsin. The risk of contracting the virus is still low, according to the university website.