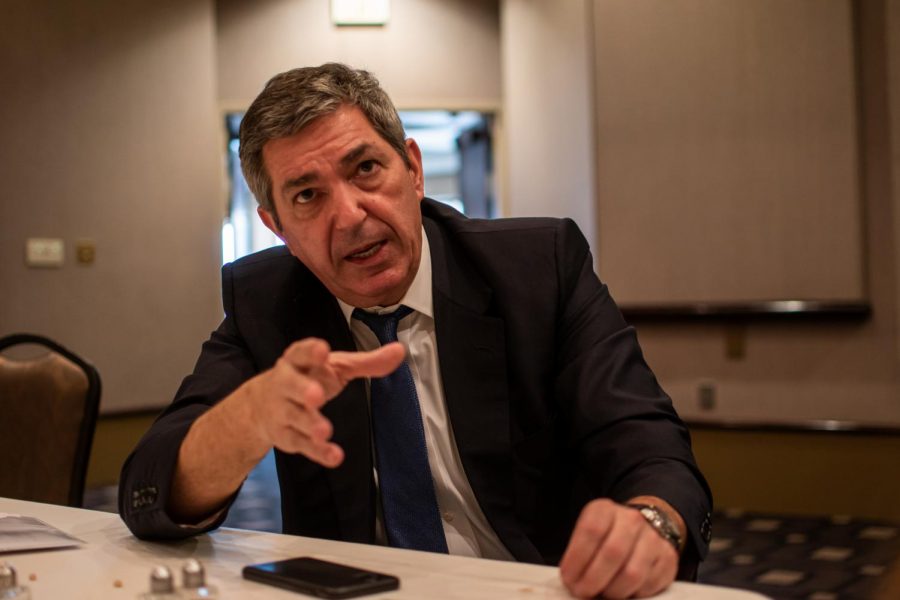 Stavros Lambrinidis, Ambassador of the European Union to the United States, visited Marquette last week during an outreach trip to Wisconsin.

“The Ambassador’s state outreach trip to Wisconsin was organized because the EU is a major trading partner of Wisconsin, and because Milwaukee is key in the upcoming U.S. elections,” Travis Smith, Marquette alumnus and staffer to the Ambassador, said in an email. “He spent his first day in Madison and the second in Milwaukee, and elected to come to Marquette because it was recommended by various alumni, including myself!”

Smith works in the Press and Public Diplomacy section of the EU Delegation to the U.S.

Smith said that the Ambassador’s staff decide where he will travel to based on the EU’s cultural and commercial connections to the state at hand, potentials for people-to-people engagements, state relevance for particular EU policies, and relevance in the U.S. elections and political events in general.

While in the “Washington Bubble,” as Lambrinidis called it, some of his main tasks include meeting with the executive and legislative branches to address matters related to U.S.-EU relations. These involve matters of trade, economics, political developments and cultural diplomacy. He also coordinates efforts with the 27 other ambassadors of the EU member states, engaging local and national media on U.S.-EU affairs, and giving speeches at a variety of events, Smith said.

Lambrinidis said that prior to working as the ambassador of the EU to the U.S., he served as the EU Special Representative for Human Rights. He said that, though there are many countries dedicated to preserving human rights, there are also many that are dedicated to violating them. He said that human rights issues are rarely black and white, as many countries protect certain rights but violate others.

He added that all human rights are connected.

“It is impossible to have economic development if 50% of the population are treated as second class,” he said. “What’s so scary about smart girls?”

Lambrinidis said that many countries fail to protect the rights of women because they fear that education will lead to female empowerment, a concept which many regimes fear.

Though efforts in specific countries may have required finding a starting point and prioritizing the violations which occur most frequently or which might be easier to tackle, Lambrinidis said that the efforts he led as the EU Special Representative for Human Rights never separated rights.

“Human rights are international rights,” he said. “Accountability is a big part of rights.”

He said that if a country is a signatory of a human rights treaty, that signature must mean something. Though there are regional mechanisms to protect human rights, Lambrinidis said that it is important to not only change the laws in the countries they are helping, but to help change hearts and minds as well.

“We try as Europeans, when it comes to changing the law, to work hand in hand with both organizations such as the UN and local civil society organizations on the ground in order to be able to find the best way to not just change laws and implement laws but also change hearts and minds,” he said.

Lambrinidis told the story of a woman from Africa with whom he had discussed female genital mutilation. He said that the EU has engaged in efforts to cut down on FGM because of the detrimental health effects on women. He said, however, that while these efforts had resulted in a change of regional laws, the woman’s community still shunned those females who had not undergone the procedure, thinking of them as dirty and unfit for marriage.

He said that much of the work he is doing now is focused on getting back to the basics of the shared values between the EU and the U.S.

“We don’t just share interests, we share values,” he said. “This is not work to be left to future generations.”

Lambrinidis said that he wants to work on the shared goals and visions of freedom, openness and democracy between the EU and the U.S.

“Values have a cost,” he said. “With our exports, we send values.”

He said that trade agreements signify an acceptance of values, so it is important for the U.S. and the EU to consider with whom they conduct trade. This is to make both parties more free, he said.

“Take Wisconsin as a state,” Lambrinidis said. “There are 95,000 (Wisconsin) jobs created every year by European countries, and many European jobs created by Wisconsin.”

He stressed collaboration and trade as very important to both the U.S. and the EU.

“The meeting itself was helpful to understand more about the Ambassador’s efforts to gauge Americans’ views on trade and relations with Europe by visiting states like Wisconsin directly,” Nolette said in an email.

As a final message to Marquette students, Lambrinidis stressed the importance of an open mind on the value one can gain from education.

“Try anything and try everything,” he said. “My education has been rich precisely because I allowed my university to blow my mind.”