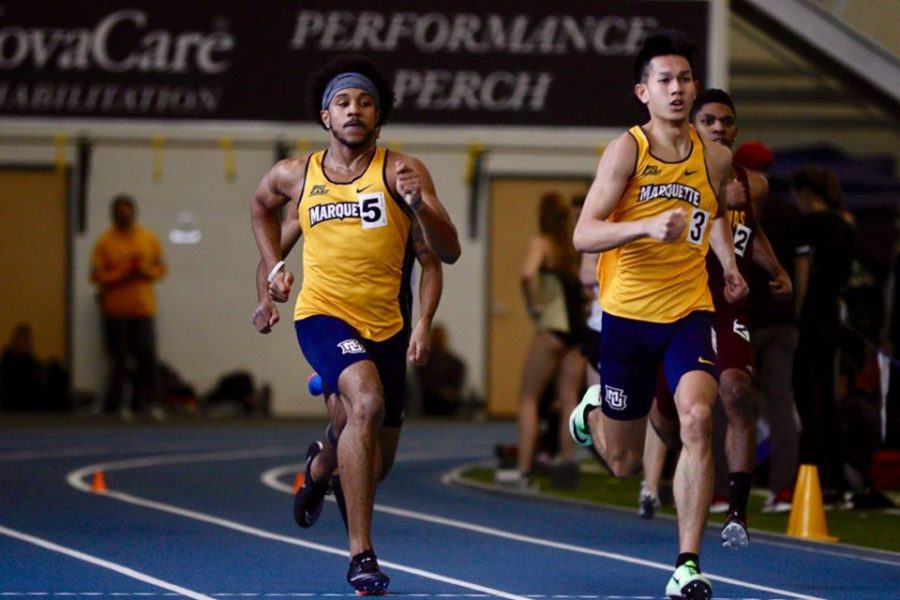 First-year Julian Wright has already made a name for himself at Marquette, breaking the 400-meter dash school record last week with a time of 48.24 at the Grand Valley State University Big Meet Feb. 14.

“I only go up from here. I’m trying to break it again and again and not stopping with the one record,” Wright said. “I want to break several different records this year.”

A native of Eden Prairie, Minnesota, Wright attended the same high school as redshirt senior basketball player Sacar Anim at DeLaSalle High School. Wright played basketball and football and ran track and field. His long list of high school honors includes being a three-time state champion on the DeLaSalle basketball team and a 2019 All-State Selection in track and field and serving as captain for each of his individual teams.

Wright said being a three-sport athlete in high school helped him get to where he is today.

“Playing three sports in high school made my physical body actually a lot healthier because I would go from each sport to each sport without much of a break, so now only doing one sport in college, I’m a lot more relaxed and in good shape,” Wright said.

“Coaches love to see three-sport athletes coming out of high school to the next level,” Rogers said. “Julian is a well-rounded athlete, and it’s fun to see his development growing as a kid in his short time here.”

For Wright, the transition from playing three sports in high school to only one in college hasn’t been easy.

“It’s a really consistent schedule, but it’s also saddening to see that I’m not playing football on Friday nights or those basketball games on the weekend. But you still have fun with your team around you and traveling everywhere with them, so it’s still a lot of fun,” Wright said.

Wright’s athleticism along with his strong mentality have both contributed to his presence at Marquette. Rogers praised his character around the team.

“Julian is a competitor, a hard worker, and he has a lot of talent — put those things together, and it’s a perfect blend,” Rogers said. “Julian and his teammates push each other every day to try to get better. Julian has always been driven to be successful and always wants to keep improving, which says a lot about his mindset.”

Wright and teammate Samuel Johnson have been going at it back and forth all year, pushing each other to get better. Johnson broke the school record for the 60-meter dash earlier this season with a time of 6.80 seconds at the John Tierney Classic Jan. 18, but Wright said he plans on taking that down before the indoor season ends.

After breaking the 400-meter dash record, Wright said the sky is the limit for him the rest of the season, but he can’t take his record-breaking performance for granted.

“It means a lot. It truly is one of the greatest experiences I’ve had so far here at Marquette, just because it’s a lot of hard work and dedication I’ve put into getting where I’m at right now,” Wright said. “My coaches all believed in me from the very beginning, and I have a great training group that works well together and pushes me all the time so in that race, I knew it was my time to shine.”

Wright hopes to carry his success into the outdoor season.

“I also want to break the 200-meter record, and then when we go outdoor, I want to break several different records there, not just individually but also in relays and just help in any way I can to secure a BIG EAST Championship for Marquette,” Wright said.