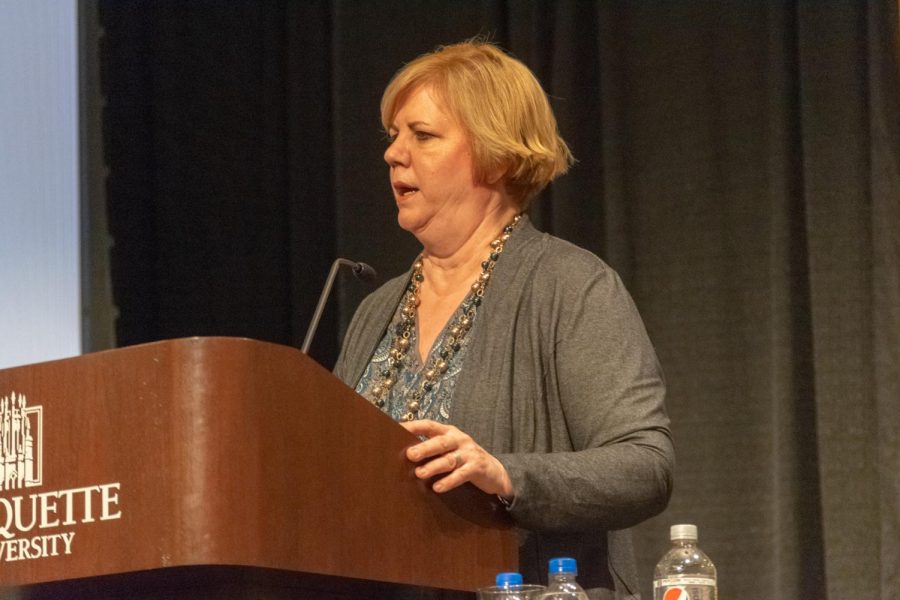 As deputy associate administrator, Saunders helps implement all aspects of NASA’s functions, policies and programs, according to a university news release. Additionally, she is NASA’s acting chief financial officer and chairs the organization’s Mission Support Council, which serves as the agency’s most prominent decision-making body.

Carmel Ruffolo, university associate vice president for Corporate Engagement, said she brought Saunders on campus for several reasons, but one especially compelling reason was because she is a woman in STEM and comes from a humanities background.

Saunders presented on NASA’s upcoming endeavor, the Artemis program, which aims to return to the moon by 2024. The program’s goal is to have a more long-term and sustainable presence on the moon by 2028, Saunders said.

“That’s something that’s an important part of our program,” Saunders said.

But it also has other goals, which include gender and racial diversity within the space program. The program, according to NASA’s website, aims to land the first woman and next man on the moon.

“That’s something that matters to us,” Saunders said.

The program had originally aimed to reach the moon by 2028. However, Saunders said Vice President Mike Pence announced that he wanted to see it happen by 2024 instead.

“There was quite a bit of excitement at NASA,” she said.

Pence had a good reason for this announcement, Saunders said.

“One of the most challenging things is it takes a lot of time and a lot of money to do human spaceflight, so it’s always a target for people who want to have other priorities for the budget,” she said.

As administrations change, Saunders said she has seen NASA struggle with having the money to fund projects that were already in the works.

“You have to run the risk that the new president comes in and says … ‘That was the other guy’s legacy, I want to do something completely different,'” she said.

Nolan Cox, a sophomore in the College of Nursing, said he attended the event to learn more about the Artemis program.

“Besides learning the details about the program, I also found it interesting to learn about how NASA collaborates with other governments on their international program,” he said.

Annie Carani, a sophomore in the College of Engineering, said she enjoyed the talk.

“Being a bioengineer at NASA is my dream job, so sending humans into space and eventually Mars is just super interesting to me,” Carani said.

Saunders said going to the moon again may also set up possibilities of going to Mars.

There are several benefits of going to the moon that Saunders mentioned, some of which include the United States being world leaders, strengthening international relations and driving the economy. She also said science and technology developed for space programs can aid in other ways, including disaster relief and the medical field. It also inspires a new generation and encourages future careers in STEM.

Saunders said many people have opportunities to work with NASA, as either an intern or in other positions. NASA is also currently looking for astronauts.

Saunders also touched on how she got to where she is in her career. With degrees in both history and law, she said she sometimes felt out of place.

“Don’t assume you can’t have a career at NASA if you’re not an engineer or a scientist,” she said. Skills that are equally important are having good people skills and being a problem solver, she said.

“It is refreshing to hear about a strong woman work her way up through an organization like NASA,” Carani said.