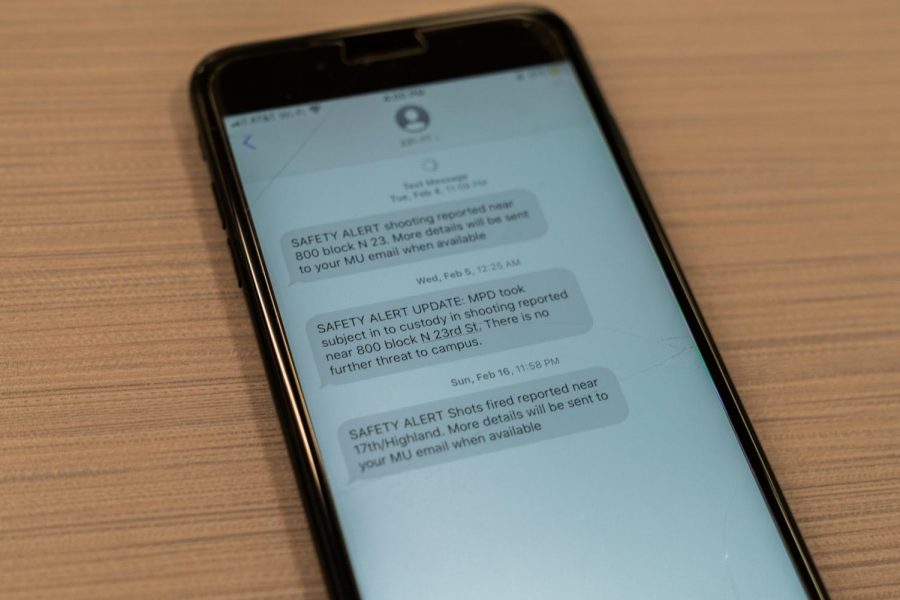 Marquette University Police Department, along with the Office of Marketing and Communication, has revised how it shares updates regarding safety related incidents, according to a university news release.

Safety alerts, sent through text messages with a follow-up email, will continue to only be sent in instances of an active threat to campus, the release said.

MUPD will send updates concerning incidents that are not necessarily an active threat through emails with the subject line, “MUPD Update – DESCRIPTION,” according to the release.

This could include safety reminders for campus when there is a pattern of crime, when rumors are circulating and MUPD needs to share factual information, and when a photo of a suspect needs to be shared to help make an arrest, among other instances.

The release said this change was based on feedback from the Marquette community. MUPD Assistant Chief Jeff Kranz said the change was first talked about at the end of last semester and went into effect this semester.

MUPD made use of the new update system following the incident Feb. 16 in which a bullet hit a Wells St. Hall window. The bullet hit at around 11:20 p.m., and a text safety alert was sent to the Marquette community at 11:57 p.m., stating that shots were fired on N. 17th Street and Highland Avenue. More details were sent to Marquette emails at 12:43 a.m. Feb. 17.

“Initial calls went into the Milwaukee Police Department,” Kranz said. “So there was a little bit of a delay, that call got transferred to us and we responded to that. … Because of the odd situation, to put something out we had it take longer than normal, and we had to coordinate with another agency to determine the location that the shooting was taking place.”

He said the department had to do more investigating to figure out where the shooting was in order to keep people safe.

The day after the shooting, MUPD issued an update to provide additional context. The update included that MUPD was on the scene of The Commons immediately. Students in Wells St. Hall were offered counseling and spiritual support. The update also included that Milwaukee Police Department canvassed the shooting area, and bullet casings were sent for testing.

According to the Feb. 17 update, the MPD investigation is ongoing, with assistance from MUPD.

“The entire Marquette community is grateful that no one was injured,” the update said.

The update also included ways that MUPD is continuing safety measures, including a safety task force, co-chaired by MUPD Chief Edith Hudson and an unnamed undergraduate student, collaboration with MPD and the District Attorney’s Office to discuss gun violence in Milwaukee, and increasing database-informed policing and hiring an MUPD data analyst.

“In addition to devoting significant time and resources to increase prosperity and address violence in our surrounding neighborhoods,  Marquette remains vigilant in our protection of the campus community, and will continue to do everything possible to ensure the safety of our students, faculty, staff and surrounding neighborhood,” the update states.

Some students have expressed that MUPD alerts sometimes have a time delay, but generally get the information out quickly.

Jacquelyn Carter, a sophomore in the College of Communication, was in the study room that was hit during the incident in The Commons Feb. 16. She said MUPD quickly responded to the students at The Commons, saying that it was no more than 15 minutes after.

However, she said a lot of people posted information regarding the shooting and the bullet immediately on social media. She said students often use Wildfire, an app that allows people on and near campus to send messages to each other. Messages range from someone spotting a celebrity, to class cancellations and to places people should avoid for the time being because of apparent unsafe situations.

“(Wildfire) reminds me almost of social media, and you just say whatever you want (and) you don’t have to get it verified,” Carter said. “I feel like definitely people hear about (incidents) first on that, even though it’s not necessarily the truth.”

Andrew Tyrell, a first-year student in the College of Business Administration, was also in the study room that was hit. He said he has also seen people use Wildfire in the past to communicate about incidents.

“You can just go on the app, type it and then boom, it’s there,” Tyrell said. “While with MUPD, they have to do it through a system. They don’t hear about it until some calls. The student accounts are more firsthand than MUPD because they are there quicker.”