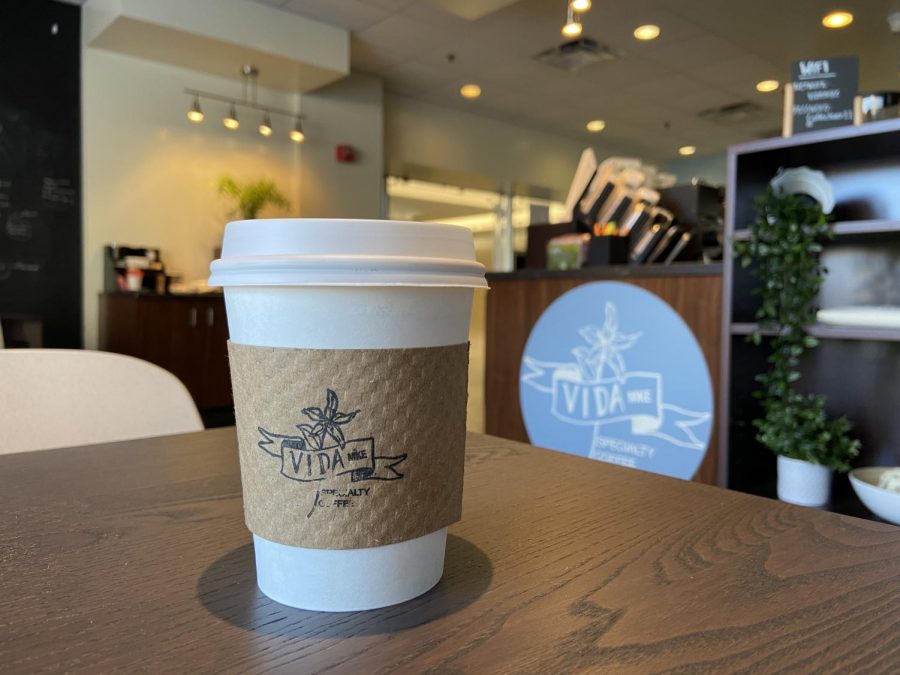 Vida Coffee, a student-run business, opened its first brick-and-mortar location in West Allis last December. Those involved are now settling in, working out the kinks and getting to know the community.

Vida is a part of Blue & Gold Ventures, Inc., Marquette’s student-run business program. Vida originally began as Buena Vida in 2010, a business that sold coffee beans and donated meals to kids in Honduras. In the past several years it has been restructured and is now more focused on retail locations.

George Haikal, a student manager and sophomore in the College of Business Administration, said he wants people to know three main things about Vida. The first is that it is a student-run business.

“For a coffee shop to be (student-run) is unheard of,” he said.

Jane Eaton, a student manager and sophomore in the College of Business Administration, said being a student-run business results in a unique mindset.

“We try something out, and if it doesn’t work, we’re immediately coming up with new solutions,” she said. “I think that that’s really cool about us being a student-run team, just because all of us constantly are working together to come up with improvements and different ways that we can change things to make things better.”

Nick Cinquepalmi, a sophomore in the College of Business Administration, said being a student-run business can be one of the challenges Vida faces.

“(People) don’t take us as seriously,” he said. “It’s just kind of proving that we’re serious and the we are actually in business to make money. … It’s a hurdle to jump over.”

The second thing Haikal emphasized is that Vida has specialty coffee.

“We’re on par with those really high level coffee shops, even as a student-run business,” Haikal said.

Third is Vida’s direct trade relationship with coffee farmers in the Dominican Republic. Haikal said they work with 12 different farmers and their families, who plant and pick the beans themselves.

“I think it’s really cool that we’re able to actually establish this relationship,” Eaton said. “I think that that separates us from a lot of other coffee shops, and we want to be sure to tell that story to the customers that are coming in.”

Ben Piette, a student at University of Wisconsin-Milwaukee and head barista of Vida Coffee, said the specialty coffee Vida serves offers a unique flavor profile that many Milwaukee coffee shops do not have. He partially got involved with Vida because they hire employees outside of Marquette.

Piette said he has enjoyed developing a process for the shop and creating a menu for Vida.

“I think there’s a lot of fun to be had when you’re still sort of settling everything in,” Piette said. “Going through the options and experimenting is really awesome.”

Eaton said the first few months that Vida was open involved learning about inventory orders, operations and managing the staff, as well as getting established in the community. The Vida staff members continue to hone their skills with weekly training sessions, which are led by student managers.

“We don’t want to set up a culture where you feel stuck,” Eaton said. “We want people to be able to improve and have their hard work pay off.”

Neither of the student managers had run a coffee shop before, but Haikal said they “jumped in headfirst.”

“It’s such a good way to have experiential learning in the business world,” Eaton said.

Cinquepalmi said he has learned a lot about all aspects of running a business, such as communication, wholesale, networking and the real estate aspect of finding locations to open.

Eaton said she is learning not only how to run a business but about coffee, too.

“I’ve always loved coffee, but I didn’t know that much about it,” Eaton said. “We had to learn how to pull espresso shots, the process of extracting the coffee beans and how it turns into coffee … and we’re in the process of learning things like latte art.”

Eaton said Vida has seen a lot of support from those in the building in which Vida is located. She said they have a lot of regular customers.

“That’s really nice just because we know that they care, because they continue to come back on a daily basis,” Eaton said. “Having them support us … it’s just awesome to see that.”

“It shows that we’re making a difference in the community little by little,” Haikal said. “I think that’s really important.”

Vida will soon open two new locations in Milwaukee, one by Aurora Sinai Medical Center and one in the Third Ward.

Eaton said she is excited about the Aurora Sinai location because it will be easier to involve Marquette students, as it is close to campus.

Haikal said the Third Ward location will be inside an art gallery and will also be a wine bar. They are planning on using more experimental techniques with coffee, such as siphon brewing.

“I couldn’t have predicted it,” Haikal said of the upcoming openings. Haikal said Vida is looking to hire more employees to prepare for these new openings.