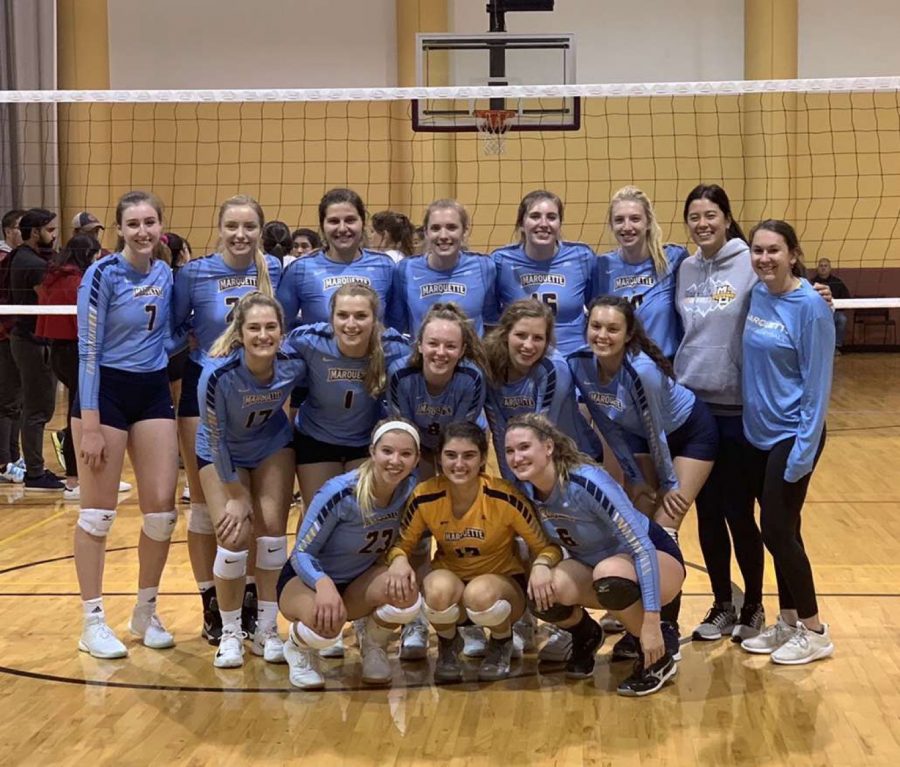 For many sports on campus, alums play a huge role. Through donations and other avenues, collegiate sports are often impacted by those who have come before them. For Marquette women’s club volleyball, its alums are a little more hands-on.

Tori North, club president and a senior in the College of Health Sciences, said the team receives lots plenty of help from former students.

“We have a lot of alumni who come back to most practices and help with scrimmages,” North said.

North said her four years with the club have been very meaningful, and she’s deciding if she wants to be involved next year.

“It’s been a really cool experience. I’ve played sports my whole life, but it’s also a great social aspect. Like, some of these girls are my best friends,” North said. “The girls always ask me if I’m going to come back next year and help coach, but I’m not sure yet. I’ve definitely thought about it.”

The process of starting as a first-year on the team was not easy for North.

“As a freshman, it was honestly really terrifying. I was so intimidated by all the upperclassmen and how good everyone was,” North said. “Everyone was so welcoming and now I absolutely love it.”

Coach Kelly Rushman, who played for four years on the club team and graduated from Marquette in 2018, said she enjoyed club as a player and wanted to stay involved.

Rushman became an assistant coach after graduating and moved up to head coach this year. The transition from player to coach is a difficult process, Rushman said, but she has had help.

“It’s hard because I overthought a lot of stuff as a coach, whereas when you’re a player, it kind of just comes naturally,” Rushman said. “Also, I’m coaching other positions than what I played so it’s been interesting. I’ve had help from … the head coach last year — and — we worked together really well.”

The alum support is nothing new, however.

“The alumni always stay really involved; it’s always been that way since I started,” Rushman said. “We’ve always had them come into scrimmage, and Anne Pufahl, who works at the Rec (Center), she founded the club and she’s always really close with all the girls so every year, she has an alumni party at her house.”

Kate Shechtman, a sophomore in the College of Education, said her fellow teammates are a huge reason why she loves playing.

“(The team) is one of my favorite things about Marquette,” Shechtman said. “I love all of the players, and I think we’ve become a lot closer this year.”

The team is competing in ranked tournaments this semester before traveling to Kansas City in April for the 2020 NCVF Volleyball Championships. After placing in the top 25 of 125 total teams last year, the team is looking for greater success this season.

“I have high hopes for us,” Shechtman said. “We did pretty well last year and if we do well in the next two tournaments, I think we’ll look better for nationals.”

Rushman mentioned that the team looks beyond just having fun.

“We are really competitive,” Rushman said. “I think a lot of the time when people think club sports, they think it’s normally a step down, but all of the schools, all of the tournaments and nationals are super competitive. It’s really exciting to watch and it’s always great to have fans.”

Before the trek to Kansas City, the team will play in one more home tournament at the Rec Center on March 28.

This article was written by Bryan Geenen. He can be reached at bryan.geenen@marquette.edu.