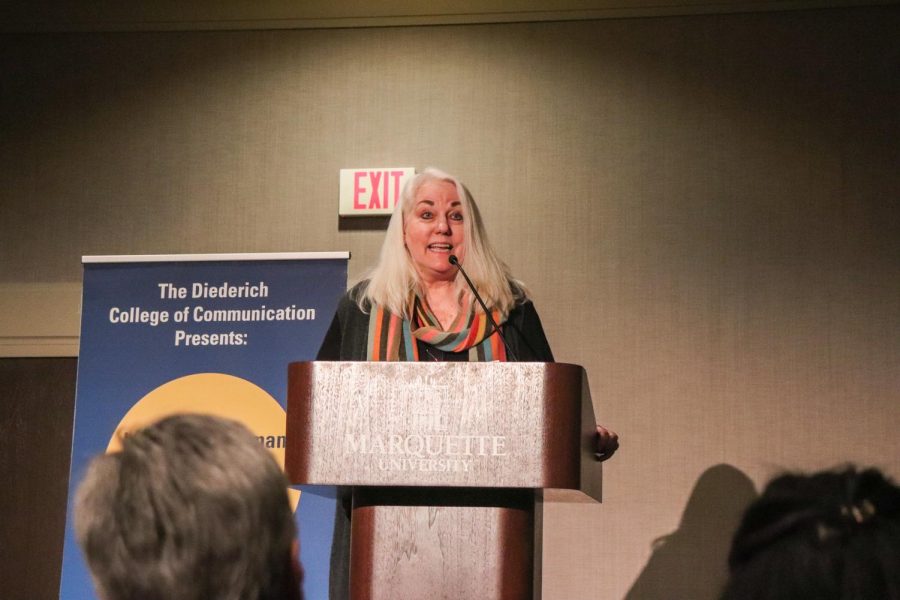 She won the Pulitzer for her piece on “Aids in the Heartland" while working for the Dispatch.

Pulitzer Prize-winning journalist Jacqui Banaszynski, who graduated from Marquette in 1974, spoke to Marquette students, faculty and administration Feb. 18 in the Alumni Memorial Union Monaghan Ballroom as the 2020 Nieman lecturer.

The Lucius W. Nieman Symposium is an annual event hosted by the Diederich College of Communication. The event is named for the founder of the Milwaukee Journal Sentinel.

Banaszynski is a faculty fellow at the Poynter Institute for Media Studies, a nonprofit journalism school and research organization. She recently retired as the Knight Chair in Editing, a position she held at the University of Missouri School of Journalism. Currently, she is an editor of Nieman Storyboard, an online publication of the Nieman Foundation for Journalism at Harvard University. The global website focuses on narrative journalism.

The Pulitzer Prizes are annual awards honoring excellence in journalism. Banaszynski won the 1988 Pulitzer in Feature Writing for her piece on “AIDS in the Heartland” while reporting for the St. Paul Pioneer Press Dispatch. The story brought readers into the life and death of a victim in a farm community. Two years earlier, Banaszynski became a Pulitzer finalist in International Reporting after she traveled to Sudan to report on the Ethiopian famine.

Throughout Banaszynski’s lecture, titled “A Necessary Bias: Confessions of a Career Journalist,” she presented the idea that rather than ignore their biases, journalists should accept and be aware of them. She said objectivity should be a method journalists use in their reporting rather than a destination, and learning how to use biases can aid reporters.

Toward the end of her speech, Banaszynski stated numerous biases she herself has. She said she is “biased in favor of every day honoring the rights and privileges of being a member of the free press.”

Banaszynski was introduced at the event featuring information about her life, including her connections to Wisconsin and the accolades she has won. The audience was also informed as to how her work has taken her to all seven continents — including Antarctica.

During her lecture, Banaszynski touched on numerous topics she has covered, a list that includes corruption, political strife and refugee camps. She detailed how in every story she covered, she never wavered from knowing that the stories she wrote were not about her but the subjects themselves. She emphasized the importance of journalists establishing both professional and personal relationships with stories’ sources.

“You should challenge yourself to have a shared experience or emotion,” she said. “Don’t use the word ‘I’ as a wall but as a bridge.”

She told the audience about some of the relationships she built through her work, particularly through her “AIDS in the Heartland” story.

In addition to her lecture, Banaszynski attended numerous Marquette College of Communication classes throughout the week of Feb. 17.

Ana Garner, professor and chair of journalism and media studies, said Banaszynski is always willing to help Marquette out.

“We got her to come speak because she is a well-known alum,” Garner said. “She has offered to give back a lot in the past and has worked and helped out the O’Brien Fellows. It was a wonderful opportunity, which she generously accepted.”

“Based on the reactions I saw, I think it serves as a great inspiration,” Garner said. “Students were able to see what is possible in a journalism career and one way that you could navigate that path. You could be a Pulitzer Prize winner. She is such a talented journalist and is always willing to answer questions about the craft. I really do believe that people came away energized.”

Dave Umhoefer, journalism professor and director of the O’Brien Fellowship in Public Service Journalism, described the impact that Banaszynski’s speech had regarding the field of journalism.

“Jacqui offered a realistic view of journalism today as well as inspirational words about the importance of the mission, especially in these politically divided times,” Umhoefer said.

This story was written by Nick Magrone. He can be reached at nicholas.magrone@marquette.edu.