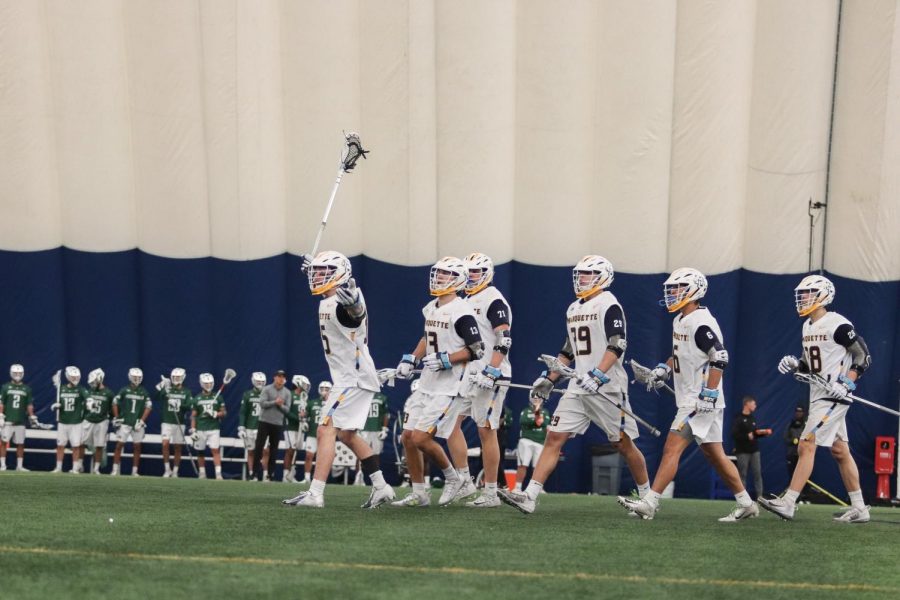 Marquette celebrates a goal in their 11-9 loss to Jacksonville on Feb. 15.

With a completely revamped offensive unit and lack of senior midfielder Connor McClelland due to injury, Marquette received contributions from a number of other players, with ten Golden Eagles finding the back of the net to set a program record with 18 goals in the game.

The first quarter was up-and-down, with Detroit scoring on their first possession, but Marquette battled right back and headed into the quarter break leading 4-2.

Marquette dominated the second quarter, outscoring the Titans 4-1 in the period and heading into the halftime break leading 8-3.

Senior Peter Henkhaus was the only player to score more than one goal in the first half, as seven Golden Eagles recorded a tally in the opening 30 minutes.

Quarter three saw another impressive offensive outburst from the Golden Eagles, once again outscoring UDM in the frame, this time by a 5-2 margin.

The fourth quarter followed the same trend, as Marquette found the net time and time again to cruise to an 18-6 victory in Michigan.

For Detroit Mercy, Brett Erskine scored a hat trick of his own, while Ryan Birney, Alex Akins and AJ Van Voorhis tallied one. Ollie Nigh picked up six ground balls, and Alex Jarzembowski went 13-for-22 at the faceoff dot. Between the pipes, Logan Shamblin made nine saves.

Marquette (3-1) stays out on the road for another week, traveling to Philadelphia to take on the Drexel Dragons Saturday at noon.