Huerter, a junior in the College of Arts & Sciences, volunteered for the Clinton campaign throughout her senior year of high school. She applied to Marquette with the intention of being an education major, but felt an increase need to become politically active after Donald Trump’s victory.

“In (Clinton’s) concession speech, she said ‘you know, I didn’t get it done, but it will be one of the young women who’s watching this,” Huerter says. “And I was like, ‘oh my gosh, maybe this could be a career path for me.’”

Huerter says her political science courses show the power young people have to influence political change. While it’s likely few other Marquette students change their educational course after an election result, most say politics are important to their everyday life.

The Marquette Wire conducted a survey of undergraduate students’ political preferences leading Jan. 21 to Feb. 21, receiving 220 responses.* 59.6% of respondents say politics are either somewhat or very important to their daily life, compared to only 25.8% who say politics are somewhat unimportant or not at all important. 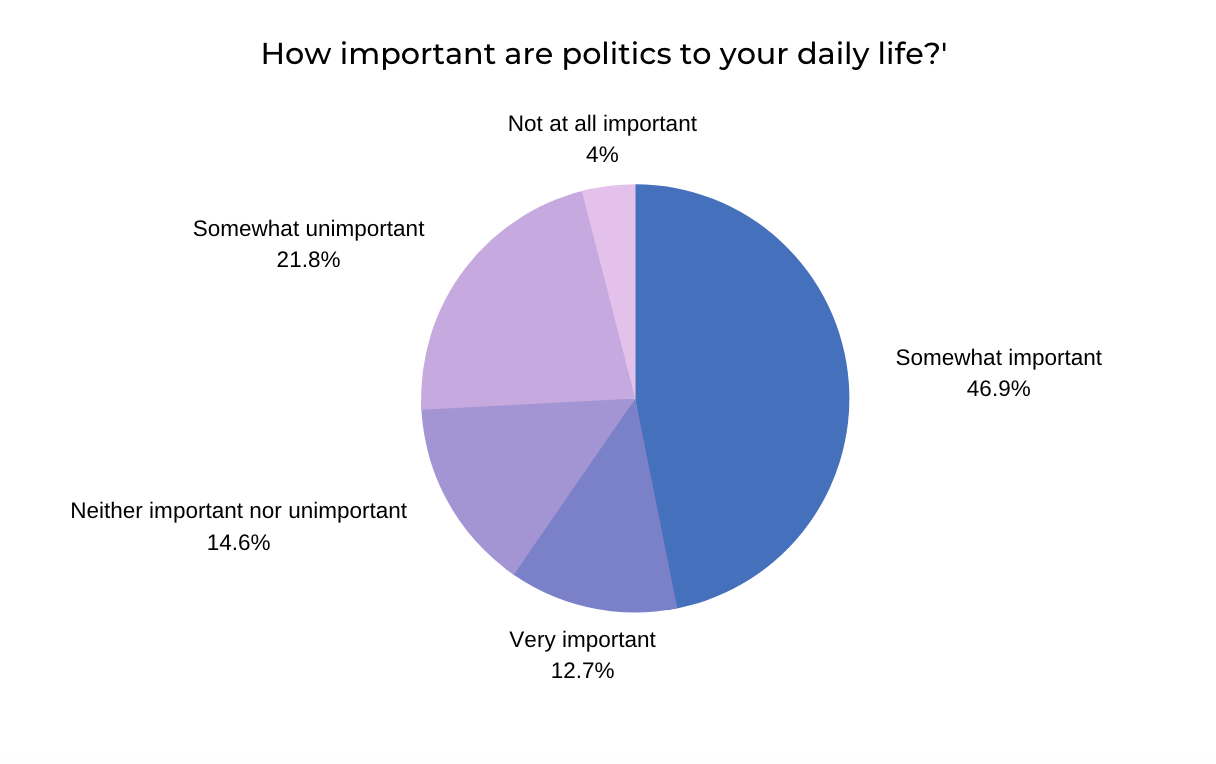 Students across the country appear to be engaging with politics at higher rates than previous years. An analysis by Tufts University estimates 40.3% of students nationwide voted in the 2018 midterm, compared to only 19.3% in the 2014 midterm.

124 students identify climate change as one of the most important issues for their voting decision going into the 2020 election, making it the most frequently chosen topic. 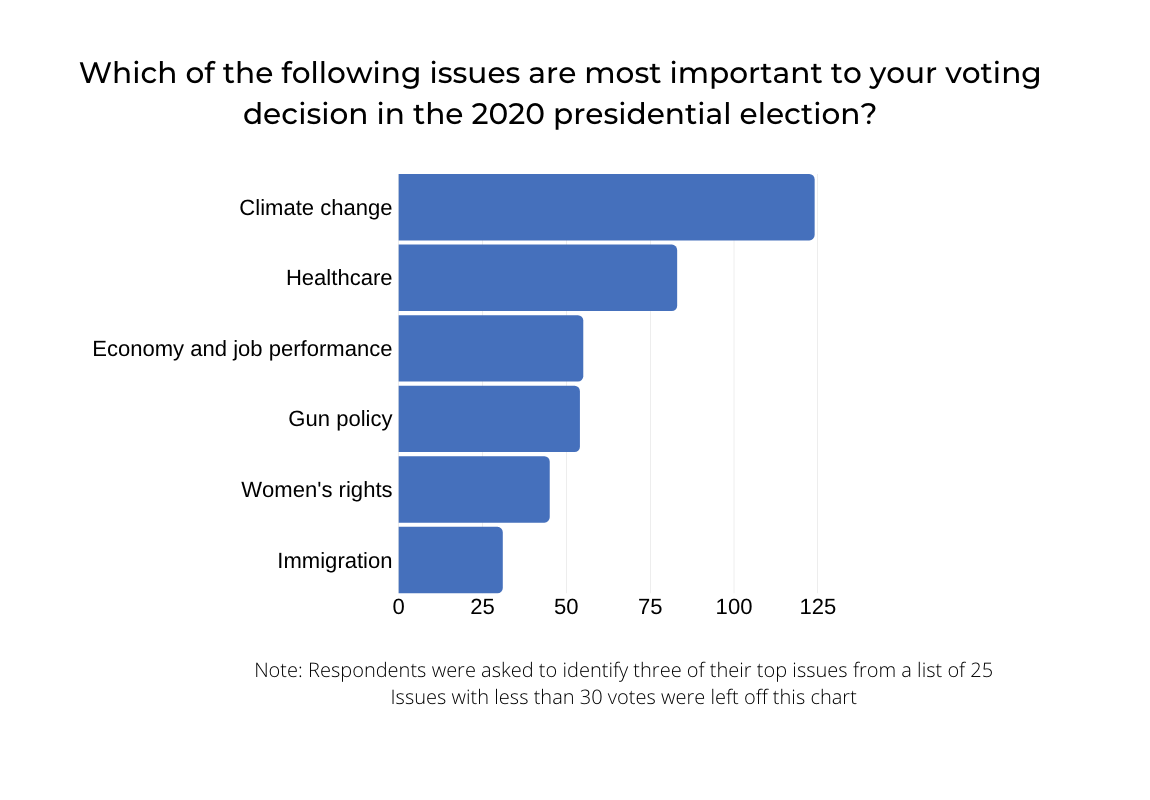 William Grafft, a senior in the College of Engineering studying environmental engineering, says predictive models describing the ‘point of no return,’ in which climate change will have irreversible effects, are cause for concern. Climate scientists from the United Nations predict that there is less than 11 years for global warming to be capped at a level of 1.5 degrees Celsius above pre-industrial temperatures, and beyond that point there will be a significant increase in extreme heat, floods and droughts.

“I think (the researchers) know better than I do,” Grafft says. “If a candidate says they think climate change doesn’t exist, I would be disinclined to vote for the person.”

Julio Garcia, a junior in the College of Communication, also emphasizes the role that scientific studies play in his decision to prioritize climate change going into the election.

“Understanding global emissions and how greenhouse gas is going to destroy our world is something that should be instilled in everyone’s mind,” Garcia says. “I think we should all be aware of what is causing this and how we can make a difference.”

Health care is students’ second most frequently cited issues, with 83 respondents saying the issue is important to their vote.

For Vincent Di Castri, a first-year in the College of Engineering, a family emergency led him to become invested in issues of health care and workers’ rights.

When Di Castri was nine years old, his mother experienced a life threatening injury at work. Di Castri says his mother used opiates for about eight years while waiting on the surgery, which the family couldn’t afford to pay for.

“She was like a zombie” Di Castri says. “That was rough for my relationship because I didn’t really have a mom.”

Di Castri says the medical bills took a significant financial toll on the family, and they eventually filed for bankruptcy. He says he supports universal health care to alleviate the stress unexpected medical emergencies have on families

“If healthcare is more affordable, it would mean people won’t have to go through similar issues.” 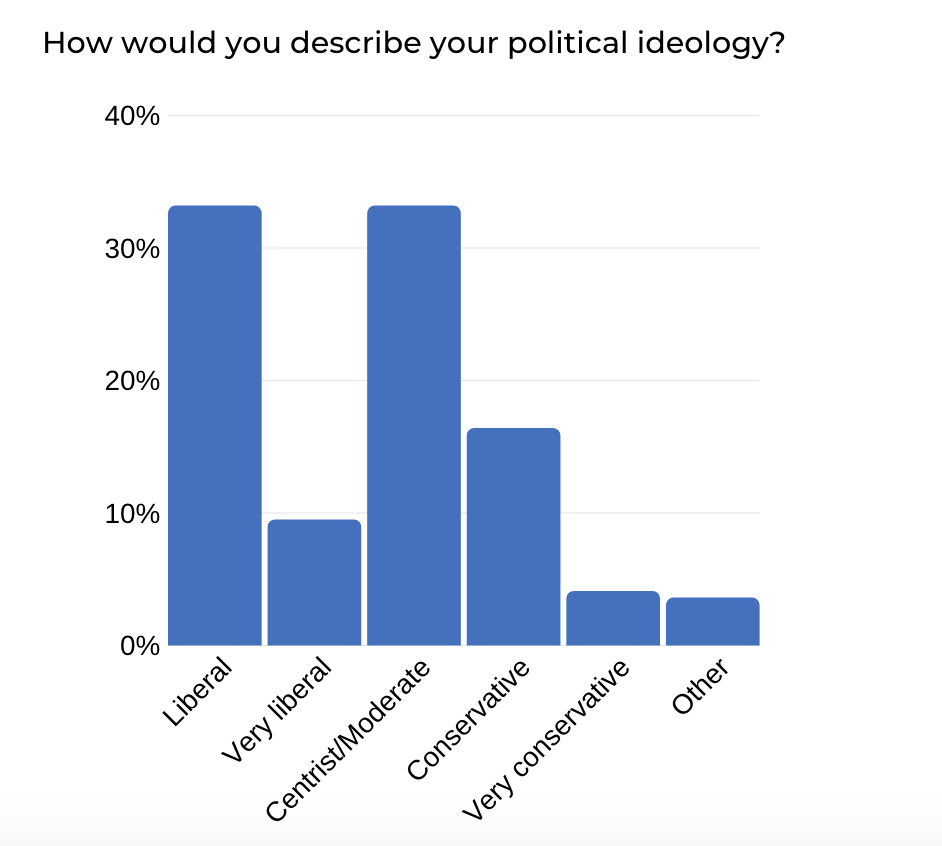 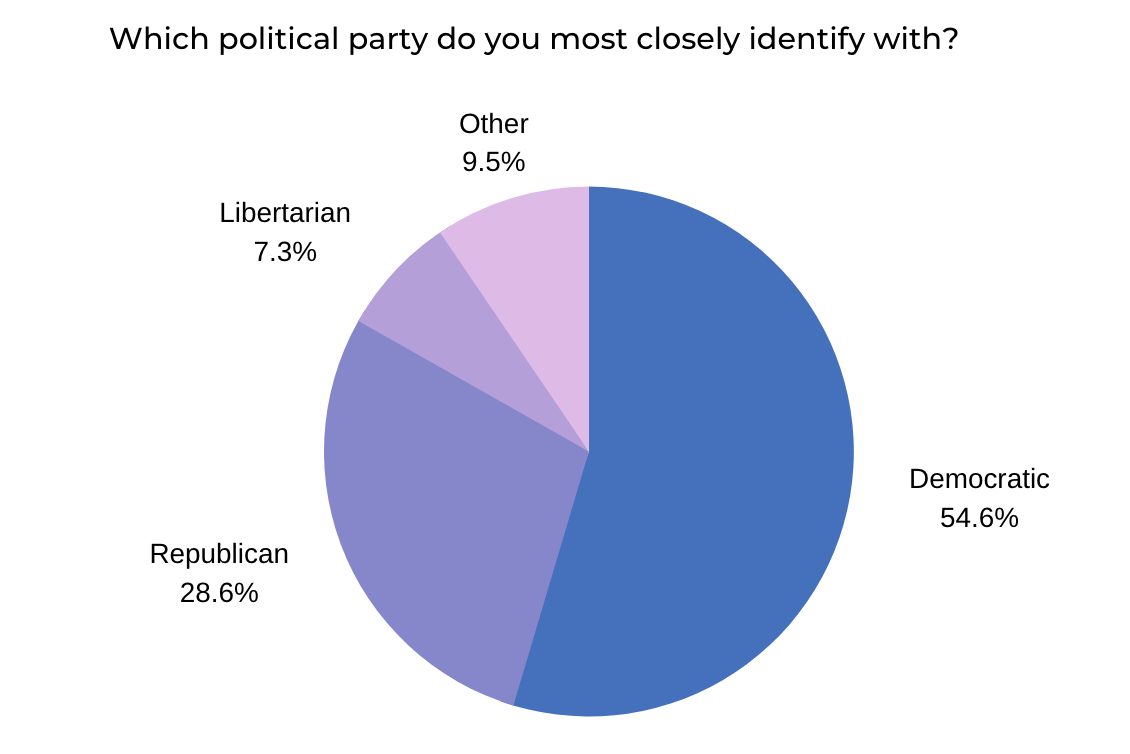 This ideological split is largely consistent with the voting trends of young Americans in previous elections. The Harvard Institute of Politics estimates 67% of voters aged 29 or under preferred Democrats in the 2018 election.

The split is also reflected in students’ preferred presidential candidate leading into the 2020 election. When asked who they would vote for if the election were held today, 28.6% of respondents say Bernie Sanders, who suspended his campaign April 8. 40.9% support Joe Biden or another Democratic candidate who has also suspended their campaign since the end of the survey period. 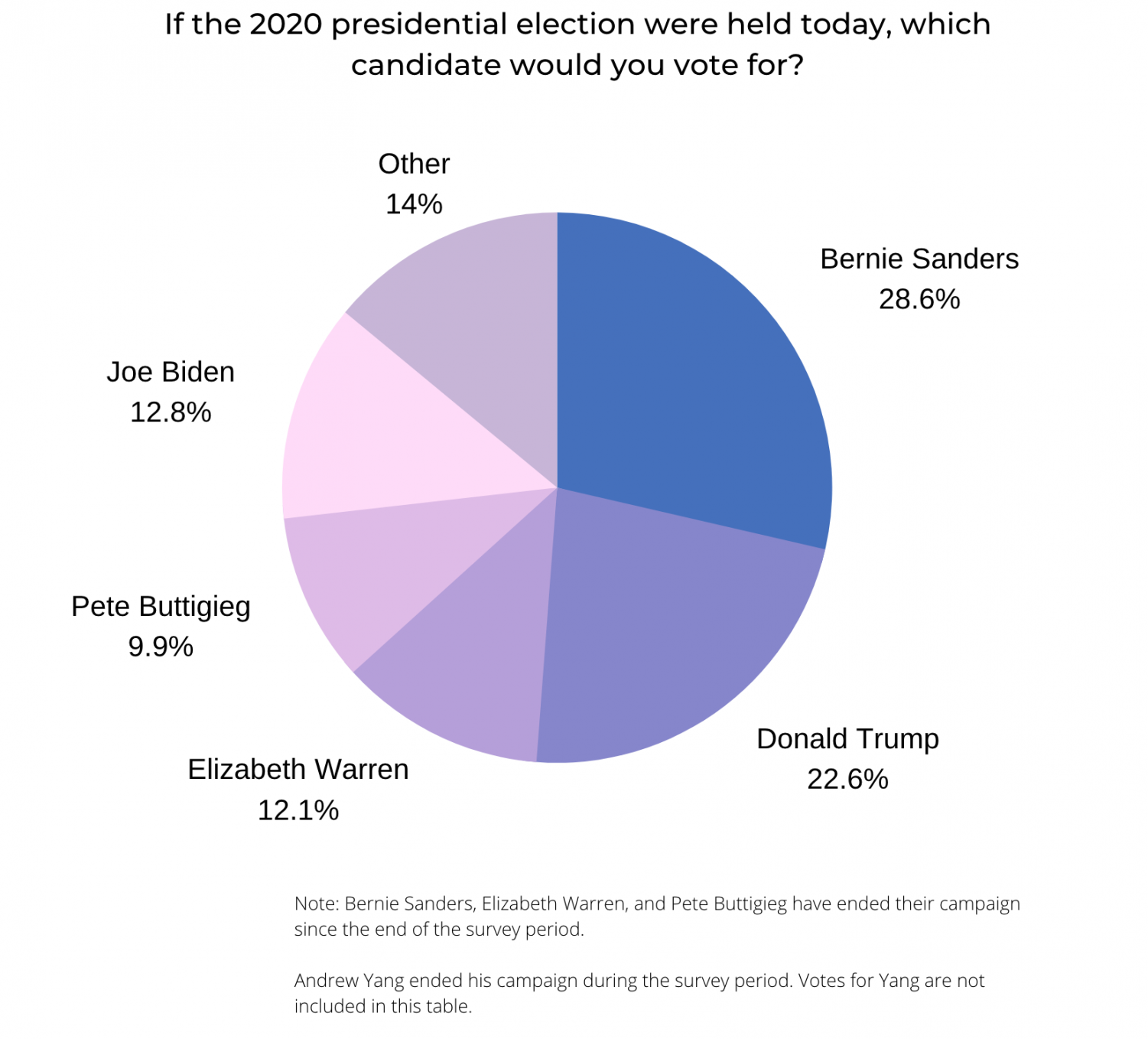 Eric Rorholm is a senior in the College of Arts & Sciences and the Marquette College Democrats chairman. In September, he started a student group named Marquette for Bernie as a way to raise support for Sanders on campus. Rorholm says Marquette’s support for Sanders is unsurprising, pointing to a February poll from Chegg and College Pulse that has Sanders’ support among college students nationwide at 50%.

Rorholm says college students’ appeal for Sanders stem from his independent views that often misalign with both major parties. He adds that Marquette for Bernie is the only student campaign for a single candidate with a presence on Marquette’s campus.

“Bernie is the absolute case study in having all kinds of values and ideologies, but having no loyalty to a corrupt party system or political institutions,” Rorholm says.

Stephen Hegarty, a senior in the College of Health Sciences, says he identifies as conservative and Republican. However, Hegarty says he believes President Trump has shown a lack of professionalism during his first term.

“As a businessman, Donald Trump has shown success,” Hegarty says. “But as a figurehead for our country and moral leader, I don’t think he’s lived up to the expectations of someone I want to be president.” 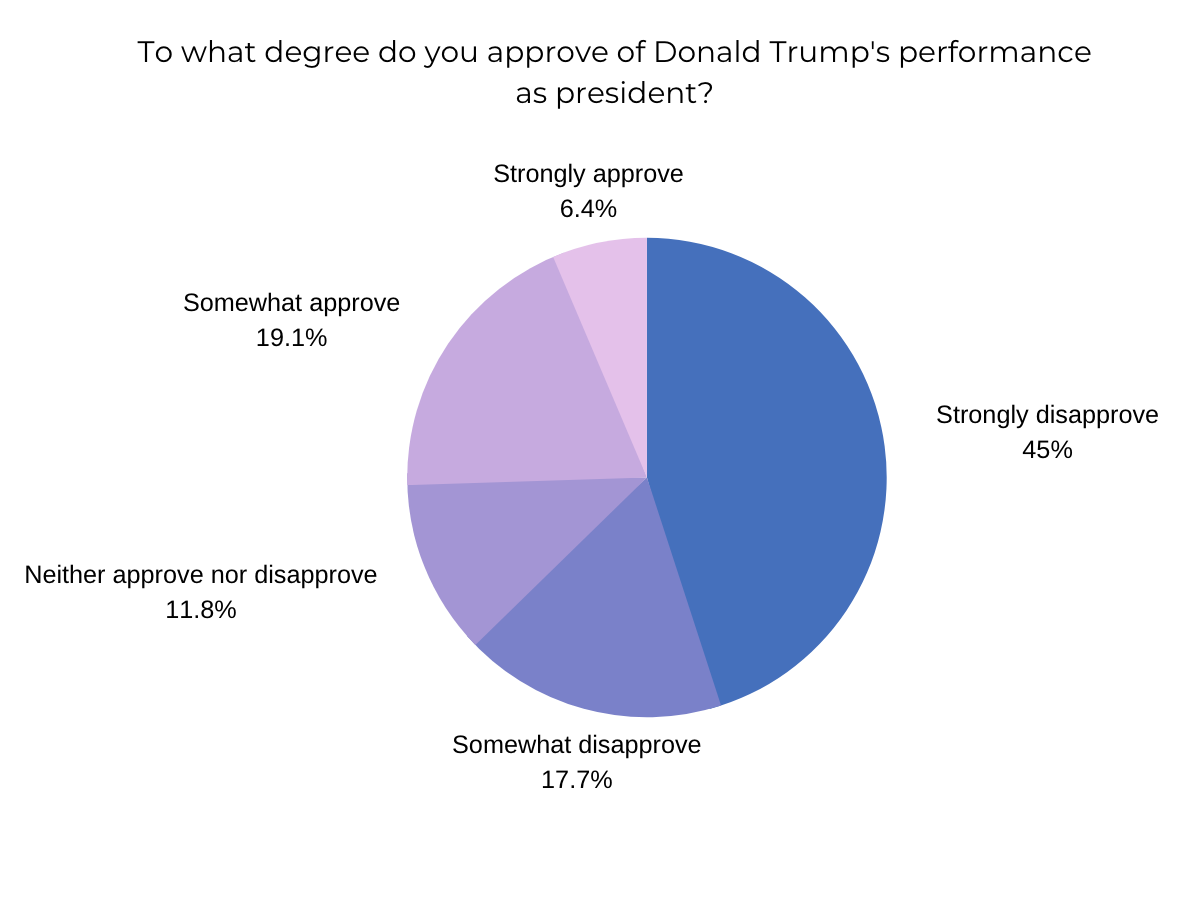 Mark Williams, a junior in the College of Engineering, has attended two Trump rallies and runs a blog expressing his conservative views. He says Trump’s ability to run the economy and emphasize American pride have impressed him throughout the president’s first term.

“I believe America’s the greatest country in the world, and just having a president who thinks like that and always says ‘America First’ is something I love,” Williams says.

Williams says he finds that college campuses have a liberal bias, especially in failing to present conservative viewpoints. He also says Marquette students are often not receptive to listening to his perspectives.

“I’ve lost a couple friends just because I’m a Trump supporter, and to me, I don’t base my friends off political opinion,” Williams says. “I look at them as a person and to me politics is secondary.” 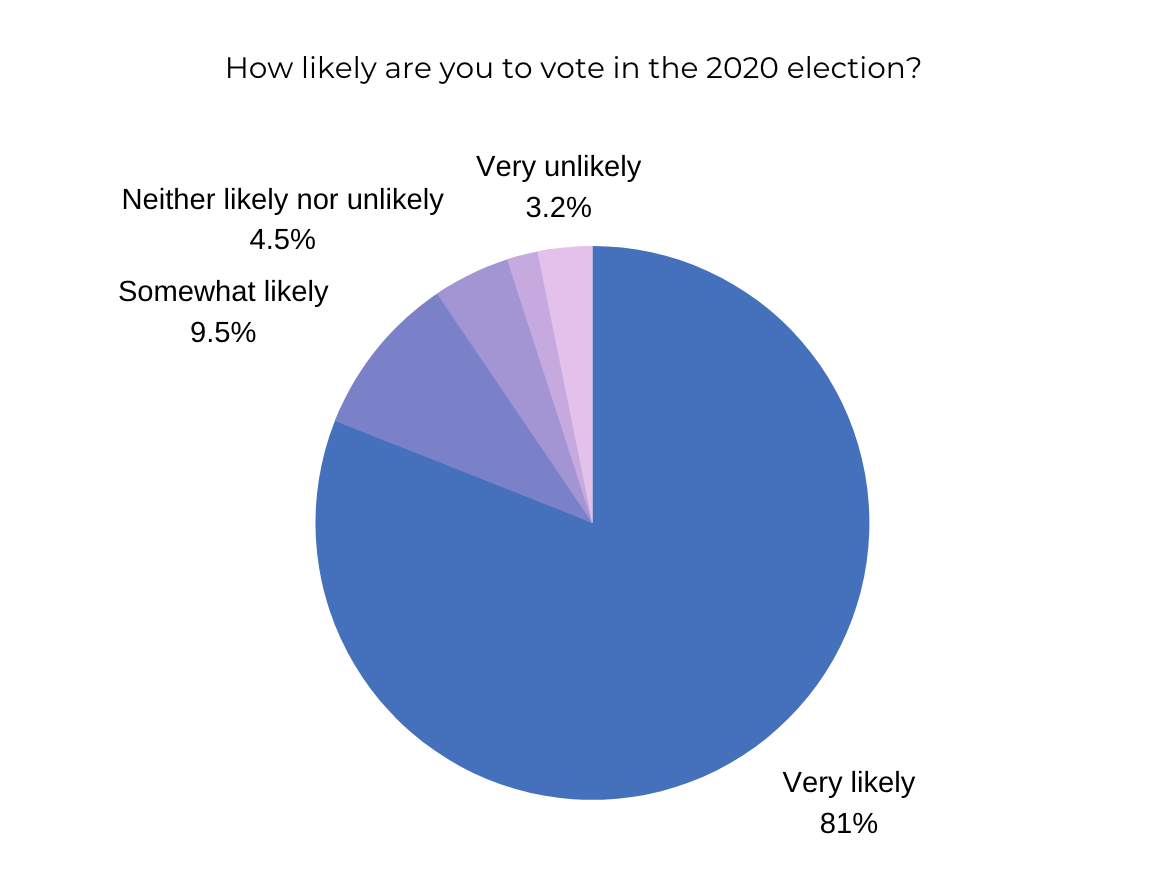 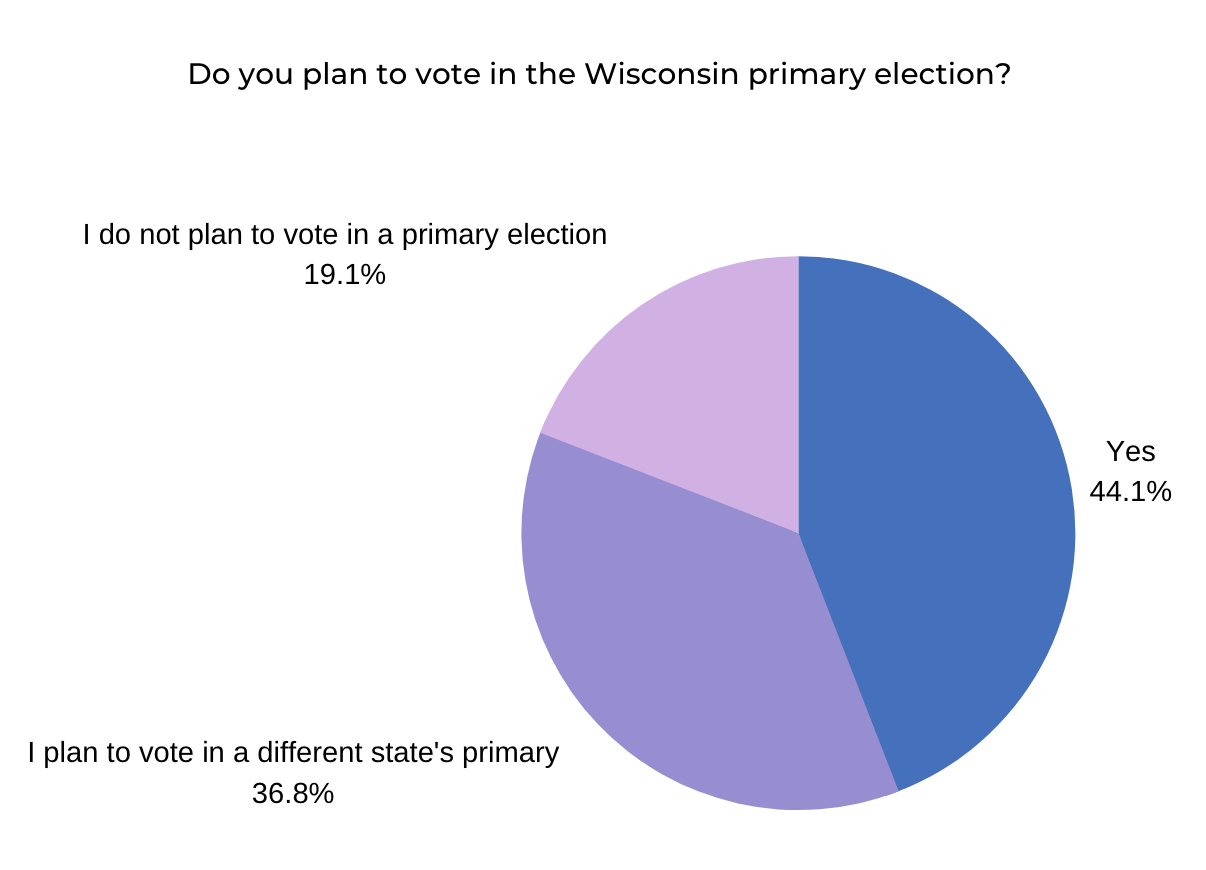 Garcia says students have an obligation to be politically active and cast their vote.

“I think no matter what spectrum you’re on, it is our civic duty to be aware of what is going on in the world,” Garcia says. “If you aren’t aware, exploitation can often go unchecked.”

Huerter says it’s important for students  to turn out in the upcoming presidential election, as they will feel the effects of their vote most strongly in the years after they graduate. Additionally, she notes youth turnout is historically lower than older age groups, despite gains in recent elections.

“College students have the most at stake in this election, especially with issues like health care and climate change” Huer says, “Your vote truly does matter, and it’s truly going to affect the rest of our lives.”

*Methodology notes: From Jan. 21 to Feb. 21, Matthew Harte surveyed Marquette students on their political and ideological views. The survey was conducted through a paper form handed out in communal campus spaces, such as the Alumni Memorial Union and Raynor Memorial Library bridge, and an online survey sent to students’ emails. In total, 220 students were surveyed, with 128 paper responses and 92 electronic responses. The survey results have a margin of error +/- 7%.