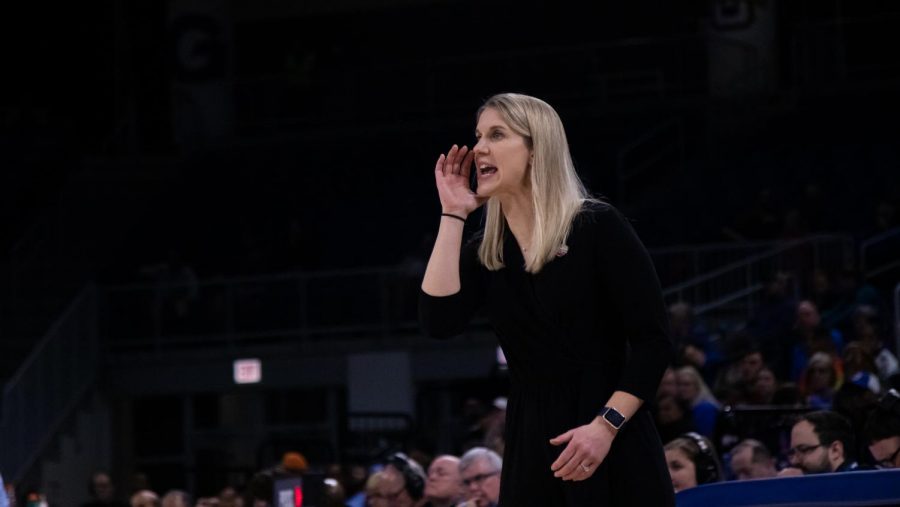 The power of one.

“Diversification is a point of emphasis across the association,” Ackerman says. “We all have a role, it’s like the power of one to try to bring along somebody else, whether it’s a woman in the business, a person of color, an ethnic minority who has the chance to be at the table.”

The power of one is also a slogan used for the annual Play4Kay Day, an event the Marquette women’s basketball team takes part in to support former North Carolina State University women’s basketball head coach Kay Yow who passed away from breast cancer.

Ackerman’s illustrious 30-year sports career includes being a women’s basketball player at the University of Virginia, and continuing to become the founder and first president of the Women’s National Basketball Association and former president for USA Basketball, the national governing body for men’s and women’s basketball in the United States.

“She’s a trailblazer in so many ways,” Marquette women’s basketball head coach Megan Duffy says. “We couldn’t have a better leader right now in the BIG EAST.”

Across the BIG EAST conference, there are 168 varsity sports throughout the 10 schools. There are only 36 female head coaches, primarily in women’s volleyball, women’s soccer and women’s lacrosse.

“Most of the ADs (athletic directors) at the Division I level are men. You have a tendency to hire the people that you know and there are more men coaches coaching women’s teams now than ever,” Providence College athletic director Robert Driscoll says. “We have to make a conscious decision to bargain and give women an opportunity. We as an athletic world haven’t done a good job with that.”

As of now, there are no female head coaches in the BIG EAST for any men’s sport. But Ackerman wants to change that.

The perception that women cannot recruit prospects for men’s sports is a claim Ackerman and four athletic directors say is invalid.

Out of the major sports, women’s volleyball owns the most progress in this area as seven of the 10 BIG EAST head coaches are female.

Seton Hall’s Anne Donovan decides to resign in 2013 and Georgetown’s Terri Williams-Flournoy leaves for Auburn in 2012 and Natasha Adair heads to University of Delaware in 2017. Their positions were given to males, Anthony Bozzella and James Howard.

“What we’re trying to promote is to get more women head coaches back in the hot chair, the big seats,” Duffy says. “I’m very proud to be one of those women in the BIG EAST.”

Historically, there have been more female head coaches in the league, but many have either resigned, left for another school or fired. Creighton athletic director Bruce Rasmussen explains how hiring female coaches is more expensive.

Duffy, who was a four-year guard for McGraw, commends her former head coach for her activism.

“She’s really big on how can we help those younger coaches, who are assistant coaches right now, be fully prepared so that they have opportunities to get those jobs and when they’re in that seat, that they do a great job,” Duffy says.

However, there are some, like Baylor University’s Kim Mulkey, who do not completely agree with McGraw.

“I understand her points without a doubt, but I’m of the belief, I want the best person for the job,” Mulkey explains at the April 4 press conference. “Bring attention to what needs to be fixed, but don’t give an absolute answer. I don’t want to hire somebody just to be hiring them.”

Ackerman says direct hiring decisions are always up to the individual schools’ athletic directors and their staff. As commissioner Ackerman oversees the whole BIG EAST Conference, while the athletic directors oversee a specific institution.

“Whether it’s the AD, his or her staff, that’s all completely managed at the institutional level,” Ackerman says. “We try to be a resource to the schools on maybe two areas, which would be just a national landscape in hiring trends … and we recently formed a Diversity and Inclusion Working Group.”

Driscoll mentions how his initiative and the BIG EAST’s strategic plan is focusing on diversity and inclusion in terms of hiring decisions.

“You have to make a conscious effort to turn over stones to find people that may not typically be given a chance,” Driscoll says. “If you don’t make it a priority, it’s not going to happen.”

Many of the athletic directors justify along with Ackerman that regardless of gender, they are looking to hire the best educators.

“Teaching, whether it’s the skills of the sport or life skills that last literally a lifetime, to me that’s the first quality,” St. John’s athletic director Michael Cragg explains. “(We) bring the best of talent, male or female, to the forefront for evaluation.”

Out of the 14 varsity sports at Marquette, there are three female head coaches: Duffy for women’s basketball, Meredith Black for women’s lacrosse and Jody Bronson for women’s tennis.

He says he starts with a list of criteria in what the absolute must-haves in a new coach are, including a clean NCAA record and a history of success on the field. A clean NCAA record means in former coaching positions the specific coach did not violate NCAA rules, like paying players under the table. Each sport has an administrator, who will always have at least 10 names as potential head-coaching candidates.

“Every game I go to, I’m looking at the other team’s coach,” Scholl says. “You’re constantly building up this database of people you might have an interest in. At the same time, you’re hearing from a lot of other (ADs).”

“We see the door opening ever so slightly in the NBA with a handful of women working on coaching staffs there,” Rebecca Lobo, former WNBA player and sports broadcaster, explains via email. “I think that will happen in college as well. Then, as soon as a woman has success, other teams and schools will follow suit.”

However, Driscoll thinks the hiring of more women should start at the collegiate level due to the breadth of opportunity and that will transfer to the professional level.

“I believe my job is the development of female leadership. That’s what I’m charged to do every single day,” Bruno says. “I can’t answer why who hires who.”

The next steps in female head coaches starts with the equal rights and opportunities that were established in the 1970s with Title XI laws.

Both Ackerman and Driscoll agree this begins with a conscious effort from the decision-makers to make equal opportunity in sports a reality.

“The stereotype is a male head coach,” women’s soccer junior defender Maddie Monticello explains. “The more we can break that stigma and getting more females welcome in it, it will go a long way.”

Duffy believes the next steps are getting women excited about honing skills in graduate assistant, video coordinator or assistant coaching roles and understanding the impact they can make and how that translates to the head coaching positions. Ultimately, Duffy wants to see more minority head coaches.

“The more diverse group of people you have in a room making decisions and sharing thoughts and ideas, I just think life is a whole lot better when you see different perspectives,” Duffy says. “Coaches are starting to understand that a female perspective can be very powerful.”

Like Ackerman, more women are becoming athletic directors, college commissioners and administration. She says while there may be fewer females coaches, there are more women working in a wider array of opportunities in college sports.

“As somebody who didn’t have any women to look up to when I was coming up the ladder in the sports world, it’s been heartening to see the progress at least at the executive level at least over the last 15 years,” Ackerman says. “I can foresee some significant progress in this in college sports in the coming years.”

This article was written by Zoe Comerford. She can be reached at isable.comerford@marquette.edu or on Twitter @zoe_comerford.