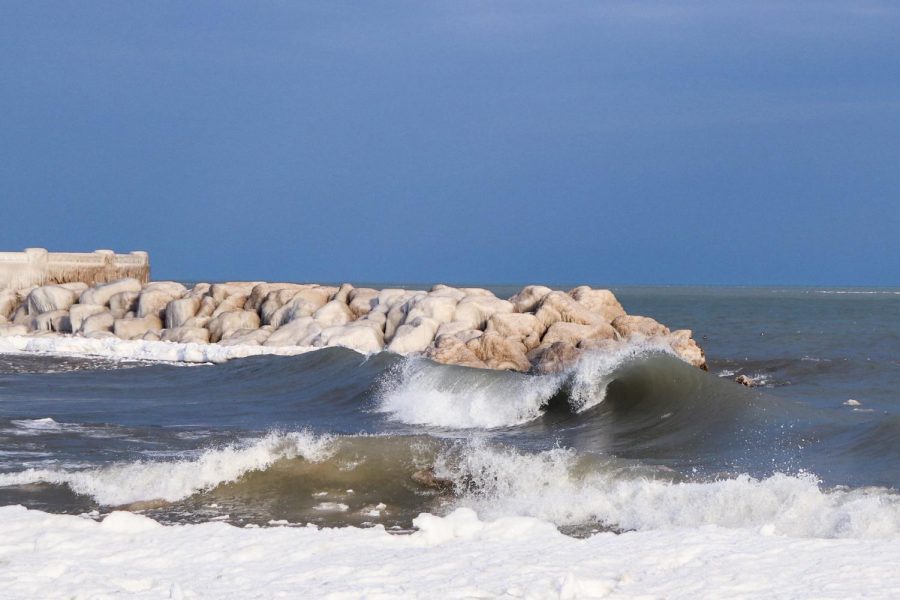 Peering outside the plane’s window, a blue mass moves slowly beneath me. Below me, it is immense and wide, reaching before and behind me.

I squint, wanting to see the details of its surface. Small waves flicker on the top and then disappear. Something moves, swimming just underneath the surface, so clearly that I feel I could reach out my hand to pull it up. I’ve run along its shores, watched the sun rise over its edges, swam in its cool waters and investigated the caves it carved and smoothed. It’s familiar and comforting, a symbol of home.

Although it may only be a place on a map for people who don’t live in the Great Lakes region, Lake Michigan is more than a blue, almost indistinguishable blob on a world map.

Lake Michigan maintains balance, sustains life and supports communities, such as serving as a primary freshwater source for Milwaukee.

For many people in the Midwest, Lake Michigan is a great source of pride and identity.

Despite the lake’s critical impact on us, we fail to recognize the uncertainty of Lake Michigan’s future by not addressing or accepting the reality of climate change.

Recently, great tensions have arisen from the issue of ‘rising sea levels’ — a common buzz-phrase associated with climate change.

The United States Environmental Protection Agency says carbon dioxide, or CO2, emissions enter the atmosphere through burning fossil fuels like coal, natural gas and oil and can contribute to the “greenhouse effect,” which is heating up the climate. Another large contributing factor is methane, which can come from the production and transportation of fossil fuels and from livestock and waste. Carbon dioxide accounted for 82% of the country’s greenhouse gas emissions in 2017; methane was second at 10%, according to the EPA.

When we see headlines about CO2 emissions contributing to atmospheric heating, subsequently contributing to a rise in sea levels and melting glaciers around the Earth, we may not realize that a similar phenomena is occurring closer to home.

Chief of watershed hydrology at U.S. Army Corps of Engineers Keith Kompoltowicz predicted in 2019 that water levels for Lake Michigan would be 11 inches higher in January 2020 than in January 2019.

Higher atmospheric temperatures due to climate change will not only raise Lake Michigan’s sea levels; they will also increase the atmosphere’s capacity to hold evaporated water, according to University of Michigan’s Richard B. Rood, a professor in the Department of Climate and Space Sciences and Engineering.

Flooding is a serious and grave reality that approximately 12 million people living along Lake Michigan’s coast will have to face.

In addition, an estimated $100 million is needed to repair roadways in the Great Lakes region due to flooding damage, according to a Michigan Department of Transportation official.

Flood damage can have additional far-reaching and often detrimental effects.

According to the Associated Programme on Flood Management initiative, a loss of lives and property, mass migration, long-lasting psychosocial effects, decreased purchasing and production power and a hindrance in economic growth and development can result from flood damage.

Elena Grossman, the program manager of Building Resilience Against Climate Effects — an initiative at the University of Illinois at Chicago School of Public Health — says climate change is projected to increase the number of cases of Lyme disease and respiratory problems like asthma due to the combined effects of higher temperatures, longer summers and pollution.

In addition to the impacts on humans, climate change in Lake Michigan will affect the balanced ecosystem of the lake.

Professor of aquatic ecology at Purdue University and member of Purdue’s Climate Change Research Center Tomas Hook says bacteria levels in Lake Michigan are expected to increase due to rising temperatures that breed bacterial growth, which could lead to “contaminated drinking water and more frequent closing of beaches.”

Additionally, we can expect to see changing concentrations of fish populations and more cases of invasive species like zebra mussels out-competing native mussel species in Lake Michigan, which will influence delicate food webs and available resources in the area.

With these current and anticipated challenges, it is essential we recognize our interconnection with the lake and its inhabitants.

While the climate change conversation may sometimes feels exclusive to the government, politicians, nongovernment organizations and fossil fuel corporations, we must make a more deliberate collective effort to recognize climate change in our daily lives. It is not just a phenomenon that is burning fires in Australia or wreaking havoc on island nations in the Pacific.

It is happening right outside our front door.

After we recognize this, we have to take responsibility for our contribution to the problem. We must work to understand the natural systems integrated in our lives and change our behavior to support these systems.

Without doing this, the lake that many Midwesterners hold close to their hearts will no longer be recognizable or accessible. We will lose our connection to Lake Michigan, to the organisms within it and to our identities.

Saving Lake Michigan from further damage is not something I can compromise or wait for. As a symbol of my home and myself, I will advocate for its respect, protection and restoration. I urge you to do the same.