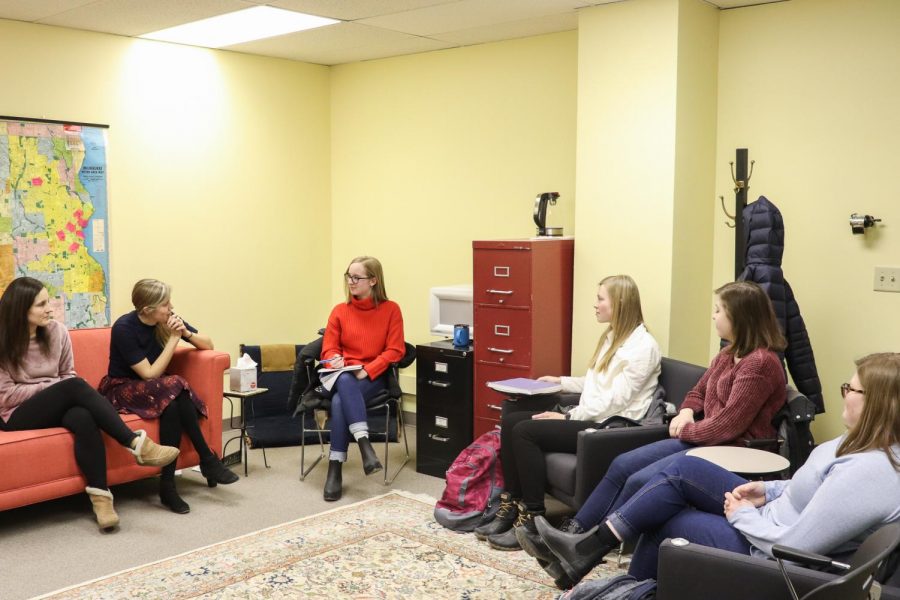 The group is expected to meet every other Wednesday at 6 p.m.

The 90-minute conversation was attended that night by a small group of students ranging from first-years to seniors. Attendees reflected on personal experiences relating to white guilt, how it’s affected them and how to act productively on it.

White guilt refers to feelings of shame some white people experience when they recognize the legacy of racial injustice and perceive their benefits from it.

Uitenbroek, who received her undergraduate degree in sociology from the University of Wisconsin-Eau Claire in 2015, started these meetings to “empower our white community members to take responsibility in calling out racism in themselves” and other relationships such as in one’s family, work or friendships in day-to-day life.

In her proposal to have these meetings on campus, Uitenbroek said that in Marquette’s 2015 campus climate assessment, numerous students felt that many of their peers were “racially insensitive.” Some discrimination involved racial profiling, harrassment and incidents related to Marquette’s LIMO service and the social media app YikYak.

Uitenbroek’s mission, as stated in her proposal, is to “build white racial literacy in white students in order to support the day to day inclusion of students or faculty of color at Marquette” while also giving others the tools to work toward racial justice.

The group is expected to meet every other Wednesday at 6 p.m. on the third floor of the 707 Hub right outside of the Trinity Fellowships offices. The group’s topics for the future include a wide variety of issues such as “white supremacy culture” and “anti-racism work strengths.” More detail will be provided about what these topics mean at future meetings.

“Since coming to Marquette, I have wanted to learn more about issues of race and any social inequalities,” Kate Lawlor, a junior in the College of Arts & Sciences, said.

Lawlor, who attended the first meeting on Wednesday, said she felt the need to participate in order to learn more about the topics surrounding white privilege and white guilt.

Discussions will typically last about 90 minutes for each meeting and will include opportunities to individually “check-in” on each individual group member’s week, hold silent reflection and share individual stories in a “talking circle.”

“Being able to have these productive conversations is what I’m hoping for,” Uitenbroek said in an interview. “(These conversations) needed to be talked about yesterday, 20 years ago, 50 years ago, 100 years ago. … I think there’s a big necessity for change.”

Wednesday’s first meeting included establishing “group norms,” personal introductions and asking group members to reflect on times they experienced white guilt or shame, and ways that it was productive or not.

However, the meeting was not attended by any people of color.

“The idea of white students discussing race without students of color involved creates an echo chamber that doesn’t challenge any preconceived notions,” Maaz Ahmed, a sophomore in the College of Communication said. Ahmed went on to state  that conversations like this should be focused on the idea of “equitable treatment of all people, something that is rooted in compassion, not guilt.”

“I think conversations on race are absolutely necessary,” Ahmed said. “However, they needed to be handled with care and with the voices of people of color guiding conversation.”

Katelyn Jackshaw, a sophomore in the College of Arts & Sciences, said it is important to have conversations like these in “today’s political and social climate.”

“It was a great start to diving into difficult conversations,” Jackshaw said after the group’s first meeting.