BASELINE: Poor 3-point shooting leads to loss against No. 15 Creighton 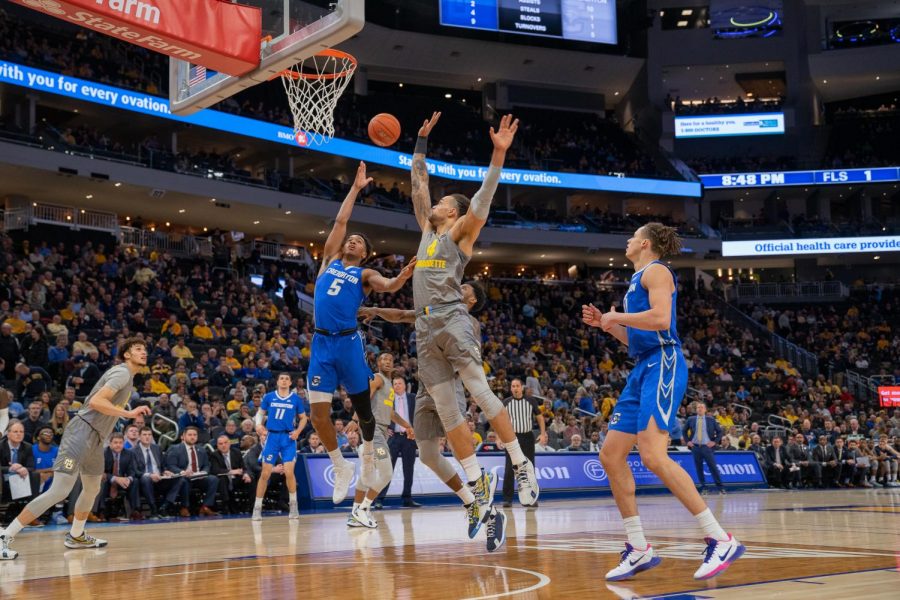 Theo John (4) goes up for a block against Creighton's Ty-Shon Alexander (5) in Marquette's 73-65 loss Tuesday night.

Six days after Markus Howard became the BIG EAST’s all-time leading scorer with 1,408 points at Villanova, the nation’s leading scorer compiled just 13 points Tuesday night as No. 19 Marquette dropped a 73-65 decision to No. 15 Creighton at Fiserv Forum. This is just the Golden Eagles’ second loss at home this season.

Despite going on a 9-2 run following halftime, MU completely fell apart down the stretch. Every time the Golden Eagles cut the deficit in the last 10 minutes, it seemed like the Bluejays had an immediate response. Here’s a quick breakdown of Marquette’s second consecutive loss:
Game MVP
Junior Theo John recorded the only double-double of the game with 10 rebounds and a season-high 12 points. This is his second double-double of the season.

The 6-foot-9 forward recorded two blocks and has passed Chris Otule for fifth on the all-time career blocks list. The Minneapolis, Minnesota native has 146 blocks.

This is the fourth time this season John has hit double figures in scoring. The last time he had double-digit scoring was when he scored 10 points against Xavier Jan. 15.

This is this first time all season Howard has been held scoreless in the first half.
Howard now has 2,595 points and ranks 39th on the NCAA all-time scoring list.
Marquette leads the all-time series 55-35 and are 32-14 in Milwaukee. Creighton has won the past three games in the series.
Though the Bluejays and Golden Eagles were the conference’s top-scoring teams, they were held to just 73 and 65 points.
MU has won two of six games this season when scoring less than 70 points.
Koby McEwen scored double digits for the seventh game in a row, which is the longest of his tenure at MU. He also contributed a team-high seven assists.
The Golden Eagles’ 7-for-13 from the free-throw line is a season-low.
Creighton was 8-for-23 from beyond the arc, compared to Marquette’s 8-for-33 shooting from downtown.

Quote of the night
When Marquette head coach Steve Wojciechowski was asked about the mood in the locker room after suffering three-straight losses, there’s only one thing he had to say.

“We’ve got to get back to the drawing board,” redshirt senior Sacar Anim said. “We have a lot of opportunities to get better going into this game and postseason as well. … We’re looking forward to Saturday.”