Marquette drops second straight game in a 73-65 loss to No. 15 Creighton 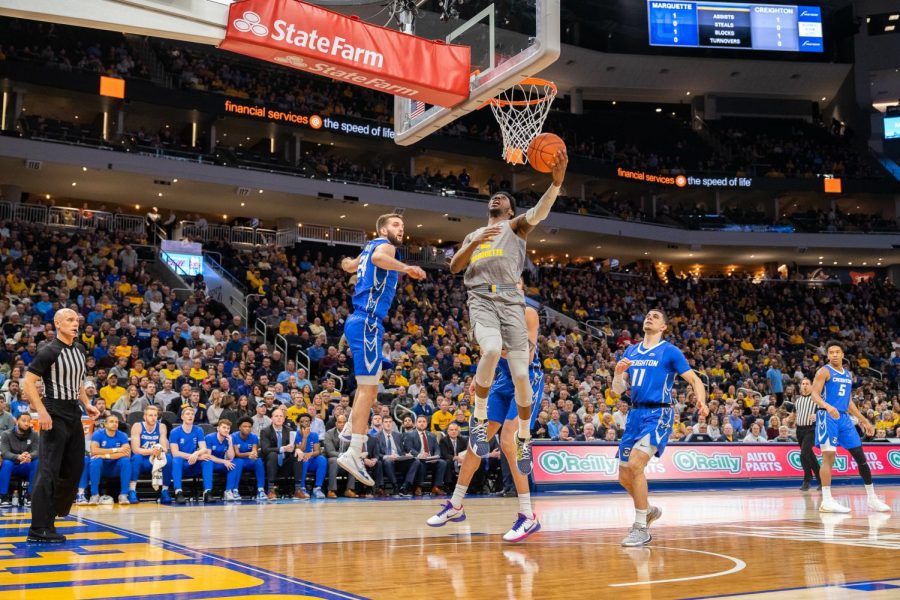 Sacar Anim (2) goes up for a layup in Marquette's 73-65 loss to Creighton. It is the Golden Eagles' second loss at home this season.

After losing at Villanova on Wednesday, Marquette had a six-day break and hosted the No.15 Creighton Bluejays Tuesday night, coming away with a 73-65 loss.

The opening half of this game did not play in Marquette’s favor, as they struggled to shoot the ball. The Golden Eagles went into the halftime break down by a score of 32-33, shooting 32% from the field and just 2-for-17 from beyond the arc.

Included in the halftime struggles was star guard Markus Howard, as he shot the ball just three times from the field, going scoreless in the first half.

Howard was more aggressive in the second half, as he quickly scored his first points of the game on a contested 3-pointer.

Despite Marquette’s improved shooting, Creighton was able to respond to any momentum Marquette gained, particularly due to the play of Marcus Zegarowski and Ty-Shon Alexander.

“They’re big-time guards, those two kids are as good of a backcourt as there is in the country,” Wojciechowski said. “They’re hard for us to stop, and if you ask any coach who’s played them this year they’d say the same thing.”

“Alexander’s a monster, and Zegarowski is probably the most improved player in our conference,” Wojciechowski said.

Alexander wasn’t just impacting the game offensively though, as he was also crucial for Creighton on the defensive end as the primary defender on Howard, who was held to just 13 points.

“Ty-Shon plays with a chip on his shoulder,” Zegarowski said. “He just plays to win and it’s great to have someone like that on your team, and he just came up big tonight.”

McDermott pointed out that Alexander has now held the BIG EAST’s two leading scorers in Markus Howard and Seton Hall’s Myles Powell to 4-of-14 and 3-of-16 shooting respectively.

“He doesn’t get talked about enough frankly,” McDermott said. “Sooner or later people need to take notice that he’s a pretty good defender.”

Marquette at one point cut the Creighton lead to three points, but as soon as the deficit got smaller Zegarowski or Alexander hit tough shots to keep their team ahead, and ultimately it was too much to overcome for the Golden Eagles.

Despite the quality defense, Howard led the comeback charge for Marquette as he went 3-for-6 from deep in the second half. He led the Golden Eagles in second-half points with his 13 and Brendan Bailey also hit a couple of huge threes after going scoreless in the first half as well.

Overall though, Marquette could not amend their struggles shooting the ball from the first half, and could not get into a rhythm offensively that was big enough to take the lead from Creighton.

“We settled for a lot of jumpers,” redshirt senior guard Sacar Anim said. “We had a lot of opportunities where we could’ve attacked them, but at the same time we were trying to take what the defense gave us.”

Anim mentioned how Creighton was paying a lot of attention to Howard, leaving other shooters open, and in that situation, they’re going to “shoot their bullets” when they’re open, the shots just weren’t falling.

Ultimately, Marquette lost to a team that is on a roll, winning eight of their last nine, and they simply played better tonight, Wojciechowski said.

“They’re probably the hottest team in our league right now,” Wojciechowski said. “They’re playing really well and they outplayed us tonight for sure.”

Marquette gets swept in the season series against Creighton and is now 0-2 against the Bluejays at Fiserv Forum. Creighton is now the only team who has beaten the Golden Eagles multiple times in their new arena.

Marquette now also falls to a BIG EAST record of 7-6, tied with Providence and Butler for fourth in conference.

Next up for Marquette (17-8, 7-6 BIG EAST) is a road battle against Providence on Saturday at 11 a.m. The Friars defeated the Golden Eagles 81-80 in overtime at Fiserv Forum Jan.7.