Marquette falls 16-6 at Louisville despite big day from Greving 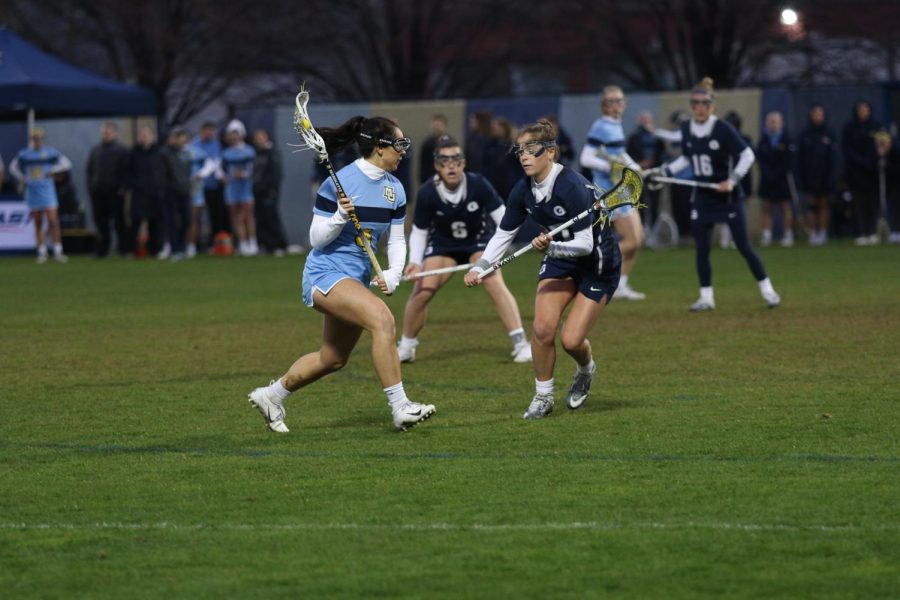 Caroline Steller (4) goes on a defender heading to the net in Marquette's 17-10 loss to Georgetown on May 2, 2019. (Marquette Wire Stock Photo.)

After earning their first win of the 2020 season on Friday against Cincinnati, Marquette women’s lacrosse was back on the road Monday afternoon visiting Louisville looking for their second win.

The Cardinals had other plans, defeating the Golden Eagles 16-6.

Similar to Marquette’s season opener against No. 7 Notre Dame, Marquette got off to a slow start and a big deficit. Louisville jumped out to a 7-0 lead in the first half before junior Caroline Steller put the Golden Eagles on the board with 3:18 left in the half. The Havertown, Pennsylvania, native, found the back of the net with 18 seconds left in the half for her second goal of the match.

By halftime, the Golden Eagles trailed 9-2.

Reigning BIG EAST Freshman of the Year Shea Garcia continued her strong start of the season with her sixth goal of the season in the first couple minutes of the second half. First-year Hannah Greving put one past Louisville’s Rachel Florek for her first collegiate goal. The Golden Eagles’ rally was cut short as Louisville responded with three straight goals before cruising to a 16-6 win.

Greving and Steller led the way for the Golden Eagles with each having a pair of goals. Junior Jocelyn Miller caused two turnovers on the afternoon as well. Senior goalie Julianna Horning made five saves while giving up seven goals in 30 minutes before junior Sophia Leva replaced her in the cage.

Louisville now leads the all-time series 5-1 against Marquette, with the Golden Eagles now 0-5 all-time at Louisville.

Marquette (1-2) will return to Valley Fields for a two-game homestand, which begins Friday at 1 p.m. against Canisius.

This article was written by Sam Acro. He can be reached at samuel.arco@marquette.edu or on Twitter @sam_i_am119.