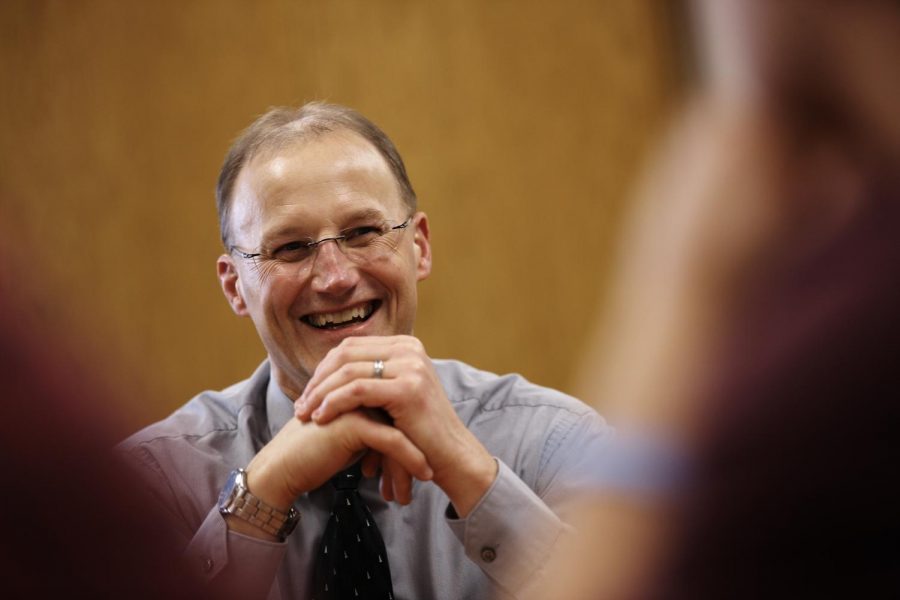 Joseph Daniels was named dean of the College of Business Administration in January of 2020.

Hundreds of people walked up the steps of the Church of the Gesu Monday morning, gathering in the chapel and filling every pew. As light shone through the church’s numerous stained glass windows, the family and close friends of Joe Daniels spoke to the crowd in a celebration of his life.

Daniels, dean of the College of Business Administration, died Feb. 11 after being struck by a vehicle while crossing the intersection of 10th Street and Wisconsin Avenue. He was 60 years old.

After a visitation earlier in the morning, the funeral took place from 11 a.m. to 12:30 p.m. A reception followed in the Alumni Memorial Union’s Monaghan Ballroom. The university cancelled all College of Business Administration classes from 11 a.m. to 2 p.m. to allow students and faculty to attend the funeral.

The ceremony began as Daniels’ wife and children stood before the crowd to share their memories of Daniels. He is survived by his wife, Lora, and his three children, Bill, 31, Leigh, 29, and Wesley, 25.

Lora and Joe were married 39 years. They were high school sweethearts, both from Daleville, Indiana. With a smile, Lora told the gathering that Joe would often say he was on “Joe time” when relaxing and taking time for himself and his family. At the end of her speech, she wished that the members of the crowd would find their own “Joe time.”

Each of the family members spoke into a microphone at the front of the chapel. Their speeches included a reverence for Joe’s constant presence in their lives. They spoke of the significant impact that Joe had on the Marquette community, as well as the impact that the community had on Joe. They described him as uniquely passionate, selfless and forgiving, and they spoke fondly of his love for music.

Following their stories, there was a Mass in which people close to recited readings and prayers to commemorate their loved one’s life.

Daniels became dean of the College of Business Administration in January after serving as acting dean since May 2019. Prior to that, he was the chair of the Economics Department at Marquette. He was a faculty member at Marquette for more than 30 years.

He was a cancer survivor, diagnosed in 2006 with stage four lymphoma before fighting the illness and becoming cancer-free for 14 years. At his funeral, Lora told the crowd that Daniels did not let the illness slow him down, and he was cancer-free just five months after the diagnosis.

Daniels’ family asks that well-wishers donate to Marquette to help establish a scholarship in his name. Gifts can be sent to the address University Advancement, PO Box 1881, Milwaukee, WI 53201-1881 or at marquette.edu/giveonline, according to a university news release.

When the building was announced at the university address Jan. 29, True said it was an incredible moment.

“There’s so many people that played a role in it, but you know he was the driving force behind it,” True said.

Teresa Janusz, director of development for the College of Business Administration in University Advancement, also worked with Daniels to help raise funds for the building.

Before the business was public, Daniels was able to go in front of donors and gain support due to his clear actionable vision, Janusz said.

“He was trustworthy and … the thing I loved most about working with him was that he was totally normal,” Janusz said. She said his love of beer and music made him feel real and authentic.

She added that he was a part of the interview committee when she was a candidate for her job. Her neighbor was friends with Daniels and encouraged her to call him “beer-drinking Joe.” She did — and said he got a huge kick out of it.

Farrokh Nourzad, a professor of economics who has worked at Marquette for 39 years, helped recruit Daniels for his original position of assistant economics professor.

Nourzad and a colleague had travelled to Atlanta, Georgia, in 1989 for an economics job market conference. They were recruiting to fill two tenure track positions in Marquette’s economic department.

The pair had 30 interviewees over three days, and Daniels was the last one. Nourzad said he remembers being tired by the end of the conference and hoping that the last interview would go by quickly so that he could make his way back home to Milwaukee.

“When he came in, he lit up the room,” Nourzad said. “He charmed us out of our heads … When he left, my colleague and I just looked at each other and nodded our heads like, ‘We found him.'” He said it was a unanimous choice to hire him.

“He transformed students’ lives,” Nourzad said. “He was a mentor. He was born to be a mentor.”

“With all due respect to the other College of Business deans I’ve served over the years — Joe Daniels was the best,” David Krause, director of applied investment management and associate professor of practice finance, said in an email. “He was an open, caring person who trusted and supported others which I believe encouraged those around him to speak freely and to offer suggestions about how to make Marquette better. To me he was the embodiment of our mission as he was sincerely dedicated to the service of others.”

Krause said Marquette students who traveled to New York City this past fall for the annual Financial Management Association trip had the opportunity to spend three days with Daniels.

“He rode the subways and walked the streets of Manhattan enjoying every minute of being with the students and alumni,” Krause said in an email. “They marveled and loved that fact that he was one of them. I told them that’s the way he is — his actions were genuine.”

Katherine Nozel, a senior in the College of Business Administration, went on the New York trip.

“To sit across from Dean Daniels at various investment firms in NYC for three whole days speaks very highly of his character and devotion to his students,” Nozel said in an email. “At first, we were pleasantly surprised to see Dean Daniels’ attendance in the NYC Investment Trip. … Krause simply explained that this was not out of character — that Dean Daniels always put the students first.”

She said although her interactions with Daniels were small compared to the impact he has had on Marquette as a whole, she felt proud to attend the business school under his leadership.

Macey Shock, a sophomore in the College of Business Administration, said she attended a memorial that was held for Daniels Wednesday. Daniels was her professor when she was a first-year student.

“He was my teacher freshman year, and we got relatively very close,” she said. “I would always answer questions in class and he … always said I acted as a daughter toward him.”

Shock said Daniels was always involved with the students, and she felt he genuinely cared about her as a student.

“You look back, and you’re just thankful that someone like Joe came in your life because he made you better, and he made you want to work harder to fulfill his vision for Marquette,” True said.

This story was written by Annie Mattea, and Jenny Whidden contributed to this report. They can be reached at anne.mattea@marquette.edu and jennifer.whidden@marquette.edu.