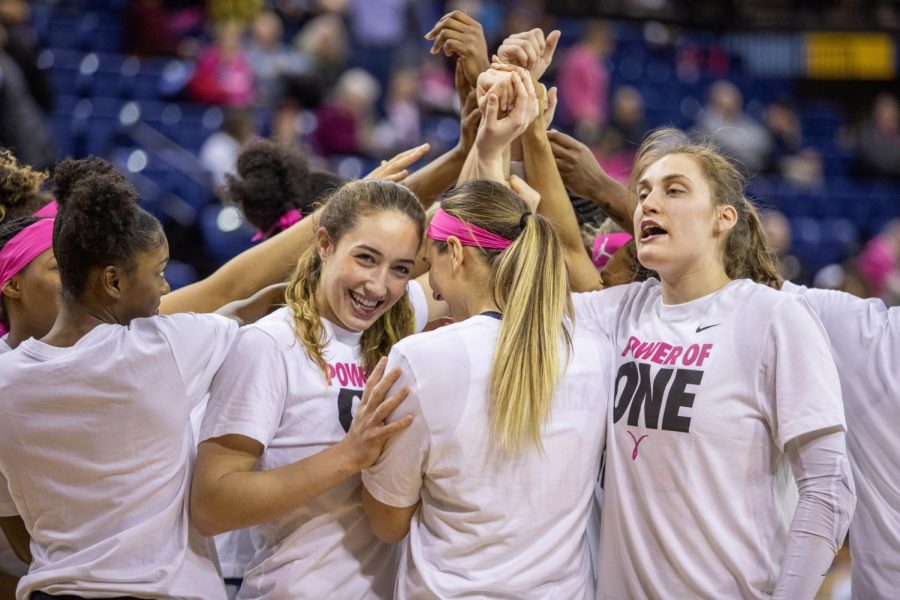 Marquette women's basketball in their pregame huddle before its 76-54 win over Butler on Play4Kay Day.

Prior to the game, both teams wore Play4Kay shirts and many fans wore pink shirts to honor Coach Kay Yow, a former women’s basketball head coach at North Carolina State University, who died from breast cancer in 2009, and all women affected by cancer.

“It’s been a great weekend with two wins and honoring those women who have survived (cancer),” head coach Megan Duffy said. “Last night, we had a dinner to honor the cancer survivors and got to hear their stories … It gave us some great perspective of these women who are absolute warriors and have so much positive energy.”

On the court, it was a battle for second place in the BIG EAST, and thanks to five double-digit scorers, Marquette prevailed over the Bulldogs.

“Last time we played (Butler), we had little flukes here and there,” first-year forward Camryn Taylor said. “Today we decided we had to come out tough and come out hard on offense and defense, just coming out how we play.”

Despite poor early performances by the team in previous games this season, Marquette hopped out to a hot start in the game behind nine early points from senior Isabelle Spingola.

MU held Butler scoreless for the final four minutes of the first frame and led 23-9 after one quarter.

“We’ve had our fair share of slow starts,” Duffy said. “(But) to have our team show up the way we did in the first quarter, it was tremendous. We were able to sustain that energy throughout the game.”

The second quarter was much sloppier, as the Golden Eagles totaled nine turnovers, but still led 42-25 heading into the halftime break.

“We lost our composure for a few minutes,” Duffy said. “We kept talking in the timeouts, ‘Get back to what we practiced, get back to our preparation, take care of the ball,’ and once we sustained that initial wave of pressure, we could get out in transition a little more, get some easy baskets.”

Quarter three was another slow one, as the teams combined for just 21 points in the frame, but Marquette still led 53-35 after the third.

MU was able to put some distance between the teams in the final 10 minutes and walk away with a 76-54 victory to get revenge on the Bulldogs after losing to them on Jan. 17.

“It feels really good,” Taylor said. “Getting this win is really big for us and a big statement moving forward.”

Spingola led Marquette with 17 points, going 6-for-11 from the floor and 5-for-8 from beyond the arc. Senior Altia Anderson contributed 10 points and 12 rebounds on the day for her second double-double of the year.

“(Altia) has been playing really great, staying aggressive,” Taylor said. “She’s been disciplined on defense, she’s been a really big part for us offensively and defensively, getting those boards and making those hustle plays.”

“What we’ve been about all year is having that (scoring) balance,” Duffy said. “Another great statistic is 21 assists on 29 made baskets against a really physical team.”

Marquette (20-6, 11-4 BIG EAST) now heads out on their final road trip of the season, traveling to Villanova for a matchup against the Wildcats Friday at 6 p.m. Central Standard Time.

“From here on out, our last three are brutal,” Duffy said. “Any time you go on the road and then finish with DePaul, it’s not going to get any easier. But I’m very proud of our team protecting our home floor today, which is everything.”