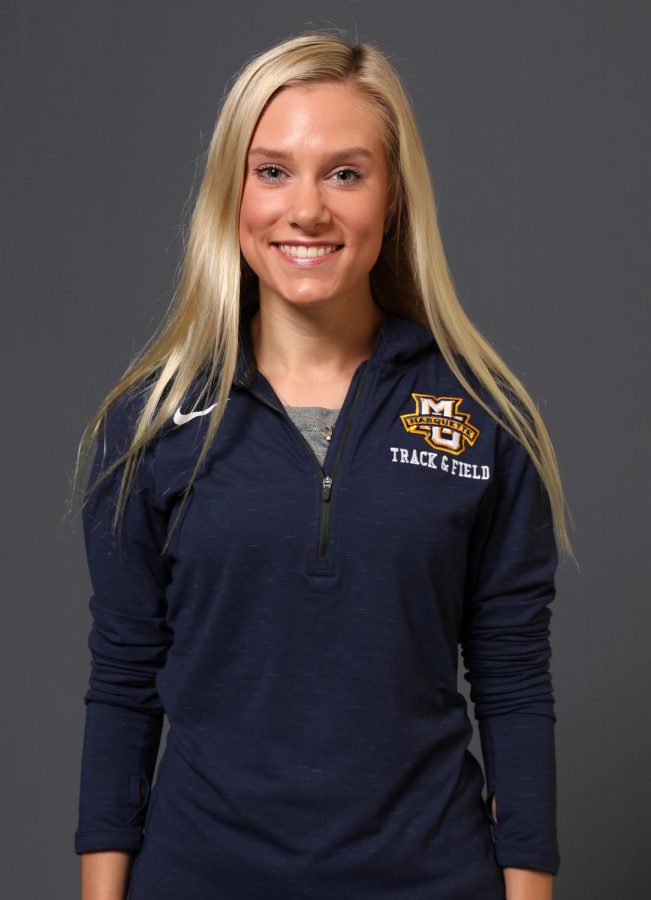 Both of Hanson’s parents ran track and cross country in college, and her two sisters, Michaela Courtney and Molly Hanson, ran at Marquette, so it would seem that Mary was destined to find herself running at the highest collegiate level.

Despite her entire family running in college, it didn’t come easy.

“It’s a bit overwhelming having a family full of runners,” Mary said. “I felt I had a lot of pressure growing up to run at the (Division I) level, but once senior year in high school came around, I fell in love with the sport and decided I wanted to run in college.”

As a two-time state champion in cross country, First Team All-State selection in the 800-meter run and a school record holder coming out of Dodgeville High School in Dodgeville, Wisconsin, Mary was heavily recruited coming into college.

Mary’s long list of high school accolades had many colleges knocking on her door. Among these schools was the University of Wisconsin-Madison, where Mary’s older sister Molly ran after transferring from Marquette.

“Initially I thought I was going to follow my older sister Molly to run at Wisconsin after taking an official visit to the school, but instead I decided to commit to Indiana State (University),” Mary said.

As a first-year, Mary had a tough time at Indiana State. Struggling with being away from home, she decided to transfer to Marquette for her sophomore year.

“I had a great time when I was here for my sister’s ceremony on campus, and I really felt like I was at home,” Mary said.

Marquette men’s and women’s track and field head coach Bert Rogers has had the chance to coach all three Hanson sisters during his 13-year tenure at Marquette.

“Mary used to come and watch her sisters race all the time, so I’ve had the pleasure to know Mary and the Hanson family for a long time,” Rogers said. “The Hansons are a great family. They love to travel all over to watch all of Mary’s meets.”

Rodgers says he’s seen Mary grow on and off the track throughout her time at Marquette.

“She’s dealt with a lot of adversity such as injuries and other obstacles while she’s been here, but I’m proud to see her grow as a person and become a leader for our team,” Rodgers said.

In her three years at Marquette, Mary’s teammates and coaches have seen her quickly develop into a leader.

“As a captain, she gets looked up to by her younger teammates, especially the (first-year) distance runners,” Rogers said. “We have a nice group of leaders amongst the team, and Mary is one of them. Mary leads by example and organizes team meetings throughout the season.”

However, Mary said she didn’t think she would be put in the position that she is in today.

“It’s kind of surprising I’m in the role I am in now,” Mary said. “When I got here sophomore year, I hardly knew anyone. This team has mutual respect for everyone so that’s how I got to be where I’m at today.”

Mary said she has made many memories and relationships that will last much longer than just her time spent at Marquette.

“One of my favorite memories running at Marquette is probably my junior year running cross country,” Mary said. “We had a great team full of leaders who were so much fun to run with. We also hosted conference that year and we finished fourth, which was the highest we had finished in a long time.”

Now in her senior year, Mary’s trying not to think about what’s coming to an end for her, but to just enjoy the time she has left. Even though she’s in her last season, Mary said she still has a lot she wants to accomplish before she graduates.

“I just want to try not to put a lot of pressure on myself and do my best. My goal is to run a lot of PRs throughout the season and enjoy the time I have with my teammates while it lasts,” Mary said.

So far in her final indoor track season, Mary set a personal record at the Grand Valley State University Holiday Open Feb. 14 in the 3,000-meter race with a time of 9:50.56 and won the mile at the John Tierney Classic at the University of Wisconsin-Milwaukee Jan. 18.

In terms of post-graduate plans, Mary said it’s still up in the air at the moment, but don’t be surprised if you see her and her family out for a run.