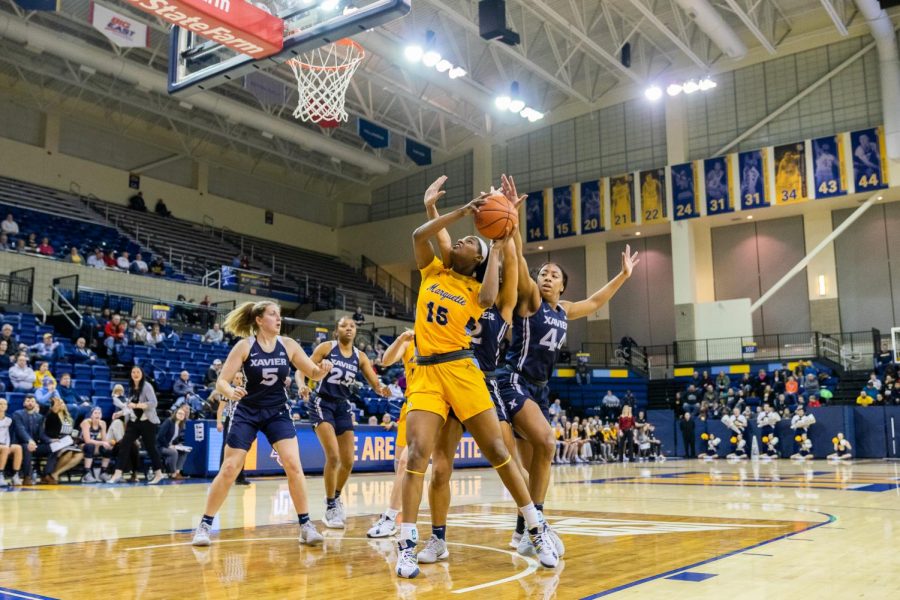 After a two-game road trip, Marquette women’s basketball returned to the Al McGuire Center to take on Xavier looking for its second straight win and sole possession of second place in the BIG EAST.

The Golden Eagles did just that defeating the Musketeers 61-48 on Friday night.

“Tonight was a little bit of a scary game with Xavier coming in and seeing how many close games they have been in their last five conference games,” head coach Megan Duffy said. “Happy we were able to protect our home floor tonight.”

Xavier’s zone defense brought early struggles to Marquette in the first quarter. Despite both teams shooting 33% from the field in the opening frame, the Musketeers lead by one heading into the second.

“We just started off slow and we are not used to starting the game in zone,” senior guard Isabelle Spingola said. “We just needed to get use to that and realize if we shared the ball and swung it around, that ball movement would help us.”

With 7:01 left in the second quarter, Xavier called a timeout following Spingola’s 3-pointer. Following the timeout, the Golden Eagle’s were about to establish their offense. Marquette ended the second frame on a 21-4 run bringing a 33-22 lead into halftime.

“Coach was just talking to us and came up to me and Lauren (Van Kleunen) and said ‘You have the green light,’ so just realizing in order for us to win we all have to do our roles,” Spingola said.

Starting the third quarter down 11, Xavier started the second half firing and causing additional struggles to Marquette. Despite holding Marquette to shoot 23% from the field in the quarter, the Musketeers still found themselves down, this time just by eight 42-36.

“If you are down at halftime, the same thing as we would tell our team to motivate them and try to come out like gangbusters and that is what Xavier did,” Duffy said.

Three 3-pointers from Spingola, eight free-throws and 12 rebounds alone in the fourth quarter helped MU cruise to a 61-48 win.

Spingola led the way for the Golden Eagles with 21 points shooting 7-for-17, five rebounds, one steal and one assist on the night. It is the third time this season the Chicago native scored 20 plus points.

“When we push out in transition I think those are good looks for me and just the guards just finding ways to get me the ball,” Spingola said.

Marquette was without their leading scorer Selena Lott, who was out with a lower leg injury. First-year guard Nirel Lougbo earned her second start of the season in place of Lott. For Duffy, it was Lougbo’s defense on the night that stood out to her.

“Her defense was just awesome,” Duffy said. “She was really good on their shooters, she is so athletic. She came over one time swatted a shot pretty good. It was great to see her growth in this opportunity when her number was called.”

Duffy said Lott is listed “day-to-day” and hopes to have her back soon.

Ayanna Townsend led the way for Xavier with 13 points, shooting 6-for-7.

“We are really excited. It was a really tough game at Hinkle,” Duffy said. “They are very similar to us, kind of the underdogs in the league this year, similar styles. They are a very good defensive team. Anytime you play a team the second time around you look for what you did well and not well, so I am looking forward to getting with the team tomorrow and get ready for Butler. ”

This article was written by John Leuzzi. He can be reached at john.leuzzi@marquette.edu or on Twitter @JohnleuzziMU.