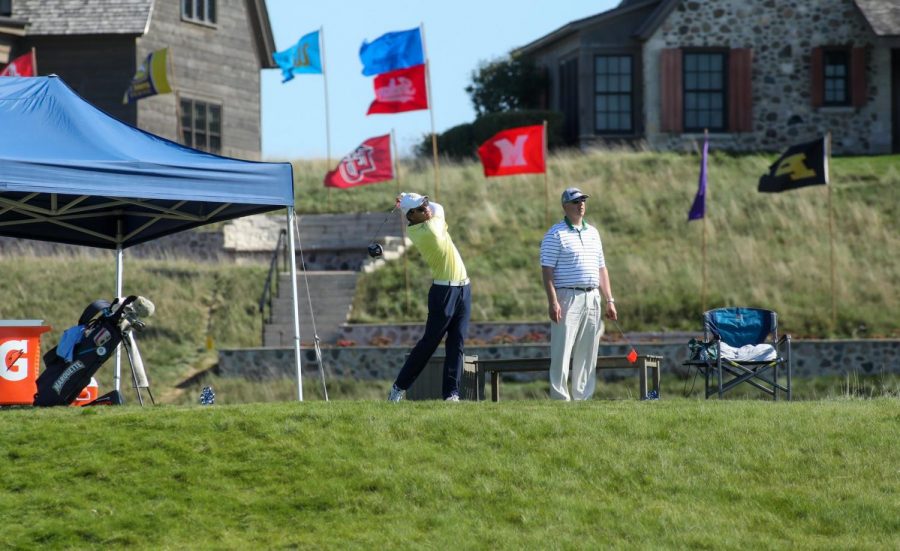 Bhoom Sima-Aree tees off at the Marquette Intercollegiate at Erin Hills on Oct.8 2019. (Photo courtesy of Marquette Athletics.)

When first-year golfer Bhoom Sima-Aree was younger, he and his siblings would wake up early on the weekends and wonder why their parents were never home in the morning. After a while, Bhoom figured out what was going on.

“One day I asked them, ‘What do you two do on the weekends and why don’t you stay home with (me and my siblings)’, and they said ‘We go to play golf,'” Sima-Aree said.

First starting to play the sport at the age of eight, Sima-Aree said the passion that his parents had for golf was eventually passed down to him.

“My dad, at one time, was serious about being a professional golf player,” Sima-Aree said.  “He did not reach his dream, so he decided to teach his kids how to play, and he passed his passion to us.”

He began to join his parents on their early morning trips and became familiar with the sport.

“(Being with my parents) was when I started being interested in going around the golf course, riding on the golf carts and watching them play,” Sima-Aree said. “Then I started to learn how to swing the golf clubs and I saw the ball roll on the green and drop in the hole … that is when I thought that I wanted to play golf.”

Ever since his first experiences with the sport, golf has played a significant role in his life. His hard work led him to be the fourth-ranked player for the International Recruiting Class of 2019 and 18th overall in the nation, according to Junior Golf Scoreboard.

With all the recognition he received, Sima-Aree was given multiple offers from schools such as Liberty University, University of Delaware and the University of Oregon. However, he was quickly drawn to Marquette.

“(Marquette) was the first university to come up to me and speak with the passion of wanting me to join their team,” Sima-Aree said. “They were the first school to not hesitate to give me a scholarship and my parents thought that the coach was very kind.”

Although Marquette recruited him heavily, he later stated that head coach Steve Bailey was the biggest reason why he chose Marquette.

“He looks after his own players as if they were his sons, and that was one of the reasons why I decided to choose Marquette,” Bhoom said. “He teaches many valuable lessons that you can’t find anywhere else.”

Coaching his 10th season at Marquette, Bailey never went outside of the country to scout Sima-Aree. He went into detail on his first impressions of when he saw Bhoom play in the United States.

“He has played in the States quite a bit,” Bailey said. “We watched him play about three times before his senior year. … I got to see him play in the Junior World Invitational, which is one of the most notable events in all of the world. He played here enough to where we knew that he was going to be a good fit for our program.”

Once he decided to play for Marquette, Sima-Aree knew that there were going be a few adjustments in life in order to become comfortable with the campus.

“The biggest transition was the culture because America’s culture is different,” Sima-Aree said. “(Adjustments) can be the food, could be how we would drive cars on the opposite side of the road and wheel, the time and weather change. It’s all about learning to adapt and getting out of my comfort zone.”

Sima-Aree said going on the program’s foreign trip this summer to Scotland was helpful for him to get to know his teammates and build relationships.

“The first time I met my teammates was in Scotland and they were all nice and welcomed me as a part of the Marquette community,” Sima-Aree said. “It helped us bond together and wanting to know about different cultures and different experiences.”

Having a team with two international players, Bailey looks past someone’s origin and into the work ethic and leadership traits they possess.

Bailey said he wants his golf program to serve to better one another, no matter what.

“I would think that Bhoom would tell you now that this is home and it’s comfortable for him,” Bailey said. “Just building that culture. … I think that’s the most important thing. Having a culture of support and wanting him to … improve his game (so much so) that hopefully one day he can go out and play at the next level.”