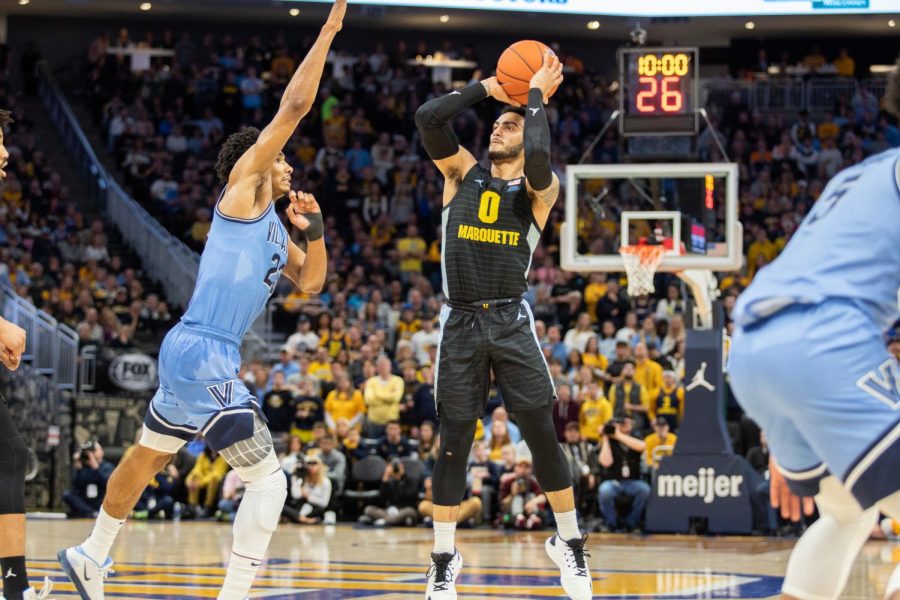 After beating Butler in front of a sold-out National Marquette Day crowd Sunday, Marquette traveled to Villanova Wednesday to face off against the No. 15 Wildcats and came away with a 72-71 loss.

It took a while for Marquette to get into the game. They started the first half shooting 3-for-16 from the field.

Markus Howard and Sacar Anim each scored in double digits in the half, with Howard having 11 and Anim contributing 10. However, Villanova led for the majority of the half and went into the break with a 38-29 lead.

The start of the second half didn’t play in the Golden Eagles favor either, as they missed their first six shots from the field and allowed Villanova to bring their lead up to 16.

Marquette started to come back, however, as they went on a 10-2 run with around 13 minutes left in the half. Jayce Johnson had a layup plus a foul and then Koby McEwen matched that on the next possession to bring the deficit down to 10.

They continued to fight to bring the deficit to single digits but struggled to put it together on both ends. With eight minutes to go, Villanova lead by 11.

Marquette continue to hang around and VU’s lead went down to single digits after Jamal Cain’s offensive rebound and layup. Cain scored all of his 13 points in the second half and went 3-4 from beyond the arc. He also added eight rebounds.

The deficit fell to five as McEwen hit another tough shot in the clutch with a well-contested three from the corner. With just over three minutes to play, Marquette was down 65-60.

Howard hit his first field goal of the second half on a 3-pointer with just over a minute to play. He was 0-for-4 from the field before then.

Howard was the focus for Marquette late in the game, and with the Golden Eagles down by three, Howard was intentionally fouled by Villanova. He missed the first and then tried to intentionally miss the second free throw but the ball did not hit the rim, giving the ball back to the Wildcats.

Despite that, Howard kept Marquette in the game and scored the last 11 points for Marquette capping it off with a three at the buzzer.

While that 3-pointer at the buzzer did not help Marquette win the game, it meant a lot in the record books as with that shot Howard became the all-time leading scorer in the BIG EAST conference, passing Syracuse’s Lawrence Moten.

Howard finished the night with 24 points on 8-for-20 shooting from the field. He also recorded five rebounds and two assists.

It wasn’t just Howard scoring for Marquette, as they had three other scorers in double digits: Anim had 14, McEwen had 12 and team-high 11 rebounds and Cain had 13.

Villanova also had four scorers in double-digits, led by Jeremiah Robinson-Earl who had 17, shooting 6-for-9 from the field, as well as collecting 11 rebounds. Gillespie and Samuels each had 14 in addition to 10 from Saddiq Bey.

This article was written by Matt Yeazel. He can be reached at matthew.yeazel@marquette.edu or on Twitter at @MJYeazel.